There is a new Star Wars Battlefront game that is releasing later this year and the only questions are if it will live up to its current hype and if it’s made the right way.

Personally, I don’t think I’ll be pre-ordering anytime soon but will definitely be keeping an eye on this title as the release date comes near. 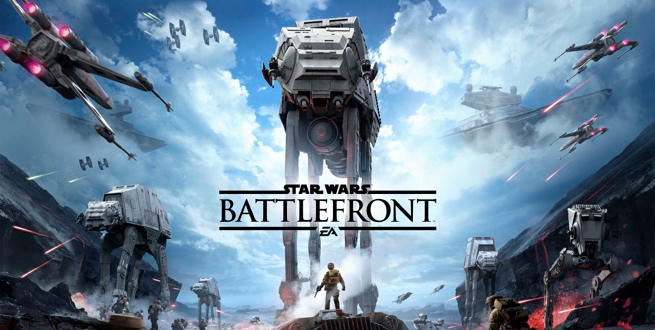 I’ve recently been hearing more and more news about this game and that’s really what has made me want to write about it. There are many things that I’m both excited for and not excited for.

I have played both of the previous Battlefront games in the series and I spent A LOT of my time playing it, especially when those games were just coming out. The 2nd Battlefront game came out back in 2005, 10 years ago.

Well, 10 years later and here we are finally seeing the first glimpses of what the new Battlefront game may be like.

I’ve heard of different features being in the game and I’m also hearing things about certain features that aren’t in the game that I really think should be.

INSTANT ACTION MODE WILL NOT BE IN THIS VERSION

This is the main thing that bugs me about this new installation to the Battlefront series.

Battlefront 2 was my favorite one simply because it offered the instant action mode which allowed me to setup my battles however I saw fit, whichever map, whichever team, whichever game mode I wanted to play I could set it up as such and then get right into the action.

It has been confirmed by an EA Community Manager on a Reddit thread about the game:

The “missions” sound slightly intriguing so far, but there hasn’t been much detail into what it actually is quite yet.

It has, however, been confirmed that there will be single-player/co-op missions that will be able to be played instead of having to play in online matches.

This actually bothers me because I’d really like to be able to just sit down and at least be able to play single player game modes on a large scale battlefield, just like in the previous games. What if my internet goes down for a goo bit, will I still be able to play the game?

I really hope they don’t go down this route, even just a single player mode against bots would be awesome!

I guess I’ll just have to keep my fingers crossed.

THERE WILL BE NO IRON SIGHTS

Just as it was in the previous games. You won’t be able to actually aim down your sights in first person.

There is still a first person mode, but you won’t be able to aim down the sights of whatever weapon you may be holding.

I can see both good and bad things about this.

The good part is that this feature will keep the game at its roots, for those looking to have the game be as much like the older games as possible, having the same exact feel, then this is a good move towards that.

The bad part, in my opinion is that its 2015 now and I honestly kind of expected this feature to be in the game. I don’t think it would ruin the experience at all and it’d be nice to have that modern feel to it.

I’m looking/hoping for a whole new installment, a new birth of the past Battlefront games. Next-gen Battlefront.

I just hope that there are still going to be crucial features included, like a variety of maps and other things as well.

THERE WILL BE 12 MULTIPLAYER MAPS ON RELEASE

Yup, there’ll be 12. It’s been confirmed in numerous places.

I think EA’s plan is to push some DLC content for other maps/planets for extra cash.

Personally, I think DLC ruins games. We are already spending $60 on a brand new game, now we have to dish out $20-$40 more on each DLC pack for more content that should’ve been in the game in the first place?

The only types of DLC that I would be interested in would be different eras to play as and the maps included with and maybe other game modes that included more maps as well. If game companies are going to be charging extra for more content then it better deliver the experience that it deserves.

THERE ARE NO CLASSES, THERE ARE LOADOUTS NOW

In the previous Battlefront titles you would choose a character class whether that was a sniper, a rebel or even a Wookie.

You’d pick your class and be on your way. The more points you scored through capturing objectives and killing enemies then the better weapon upgrades you could temporarily add to your weapons.

It seems that in this game they are more going for a Call of Duty route when it comes to picking your weapons/perks. This is interesting because I believe that if they do it right that it will prove to be a fun way of playing in a Battlefront setting.

It has been said that the more games you play and more points you earn then you’ll earn experience and maybe some kind of currency to unlock different weapons and other things within your loadout.

Hopefully I’ll still be able to play as a Wookie, that was one of my favorite classes! 😀

YOU CAN’T JUST RIDE IN ANYTHING

You can definitely take part in things such as snow speeders, speeder bikes, the Millennium Falcon, ATSTs and other crafts like the TIE bombers.

One awesome contraption that has been confirmed to not being rideable are the ATATs that will be in the game. They have been put on rails.

This means that they will be automatic and there will be no players controlling them.

I see this as both good and bad.

Bad, because in previous games we were able to ride them.

Good, because there won’t be new players and troll pilots taking control and screwing things up.

You know for a fact that it’s probably an important asset to the team if you’ve got an ATAT. Having a trololol pilot aboard taking control would screw things up for the whole team and would force the team into defeat by screwing with its biggest asset.

I think this is cool and I can’t wait to see how vehicles finally turn out in the final game.

WE CAN STILL PLAY AS THE STAR WARS LEGENDS

What do I mean by this?

Remember being able to play as different heroes and villains in Battlefront 2?

Well it’s been confirmed that we’ll be able to do the same in this game as well! 😀

One of the recent reveal trailers that has been released actually shows a glimpse of Darth Vader, and the cinematic graphics look fantastic.

Oh, did I say that the cinematic graphics looked good?

Well, I meant to say that the game engine looked good.

Yes. Those are the actual visuals that are apart of the game engine that DICE is using to make the game.

This means that it is going to look AMAZING, especially on PCs! 😉

I tried looking for screen shots of actual in-game features like the HUD and other aspects of the game but that information just is not out yet/hasn’t been leaked quite yet.

We may have to just wait for E3 before we will actually see some more gameplay and confirmations about this game but check out the screen shots below! 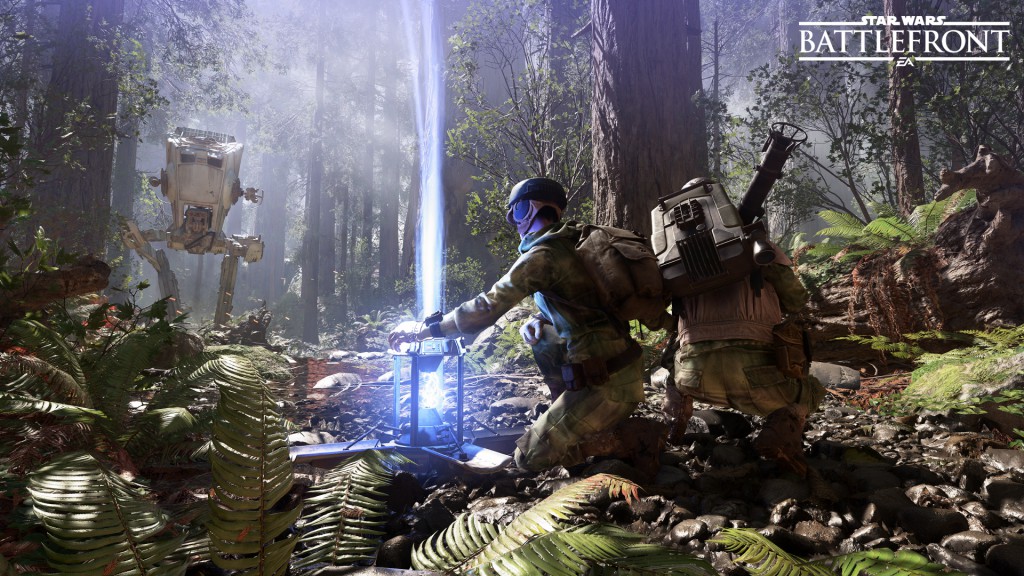 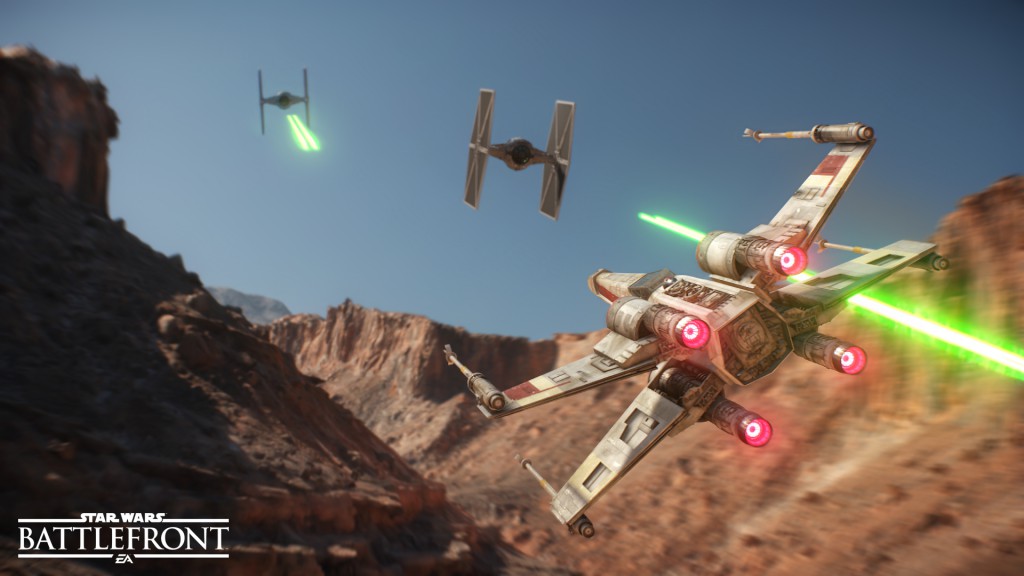 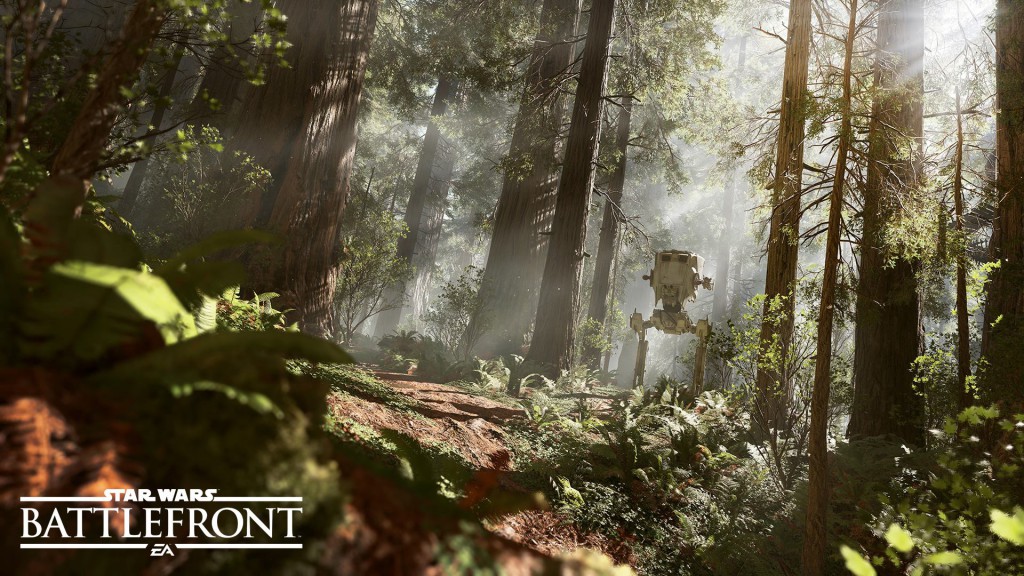 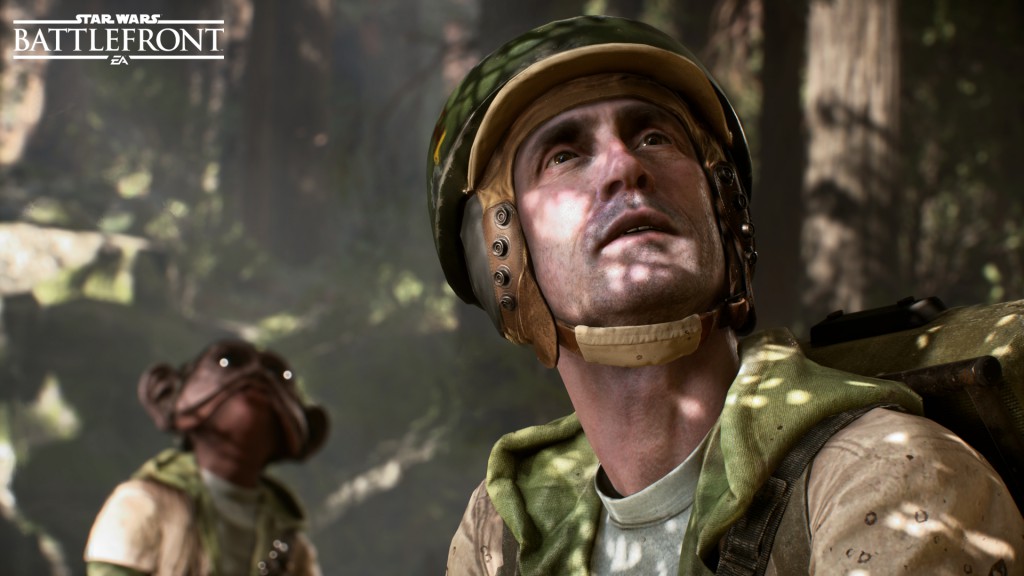 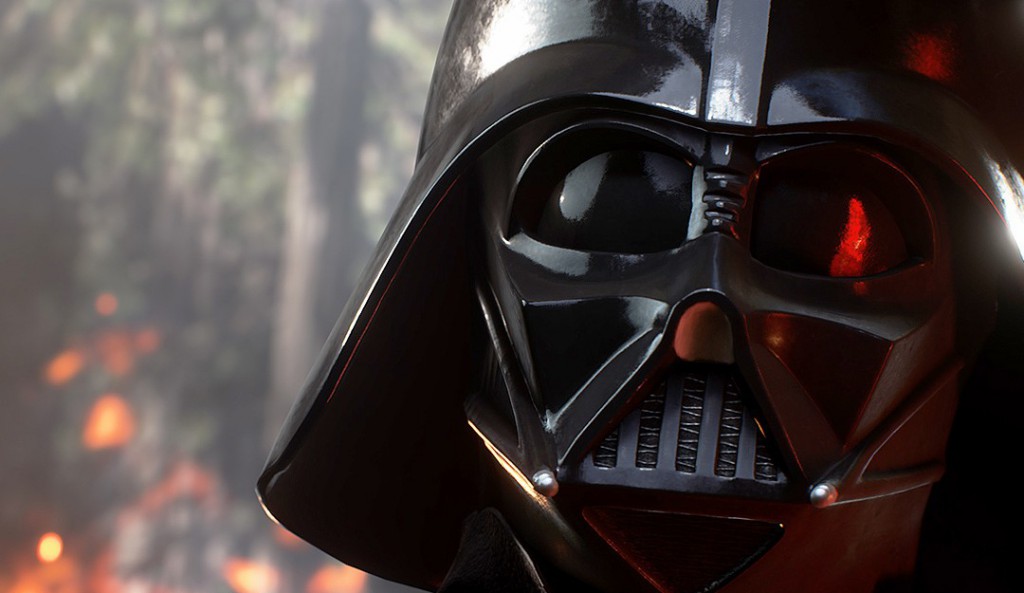 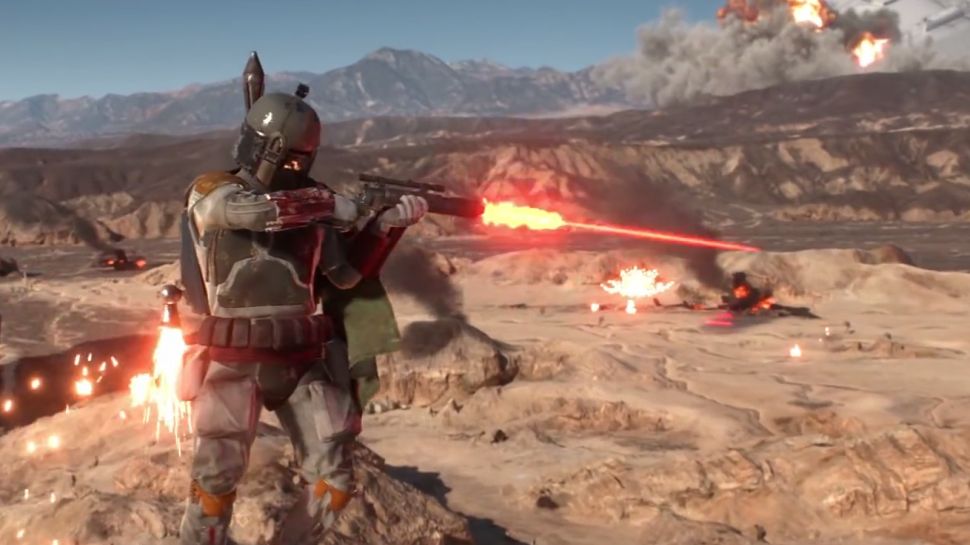 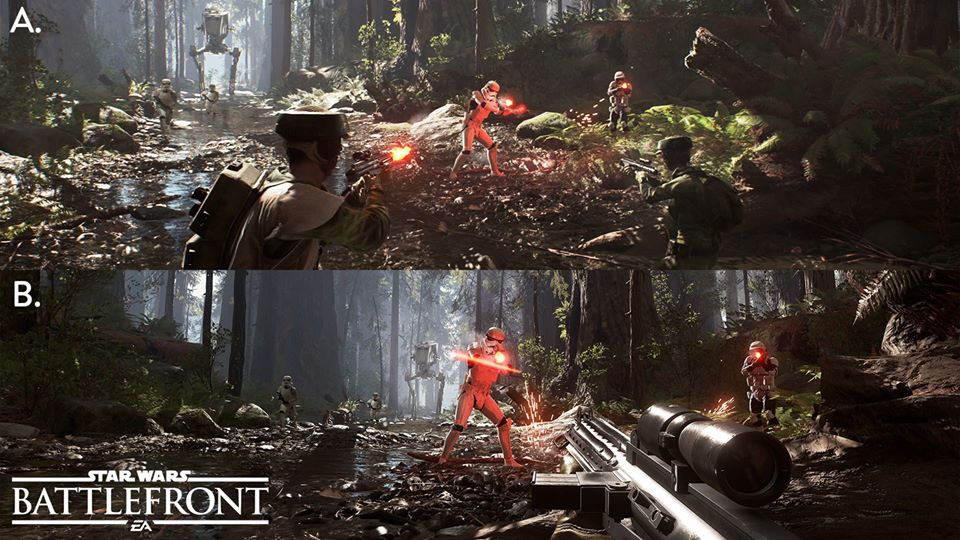 I’m pretty excited to see what this game will come to be, but I’m definitely going to wait for more information like PC hardware benchmarks and their reveal at E3 this summer before I make any sort of decisions on purchasing this game in November.

I never pre-order games for PC because I can never know if the game is going to be optimized for my specific PC hardware so I wait for the benchmarks to see if my hardware is capable of at least running it. Someday soon I’ll be building a super rig and I’ll be able to showcase the unlimited graphic potential behind gaming PCs! 😉

Also, I’ll definitely be doing another post on Battlefront after E3 so stay tuned for that!

What do you guys think of the current confirmations for the new Battlefront game?

Are you excited or frightened for this game?

9 thoughts on “New Star Wars Battlefront Game, Living Up To The Hype?”