I decided to pull the trigger and see if Skyrim VR is worth getting on the PC. Using the HTC Vive, Skyrim VR has surpassed most of my expectations though there are also a few things I think they could improve on within the game.

Skyrim VR is mostly what you imagine it is. The full game, playable in seated or room-scale VR mode, swinging your weapon to hit and actually shooting the bow similarly to how you would in real-life…

They did a pretty good job porting it into VR and whether or not it’s worth the full $60 comes down to pure opinion but for me, it was worth the price considering that I haven’t played Skyrim for a long while and mod support down the road is going to make it even more worth diving into. 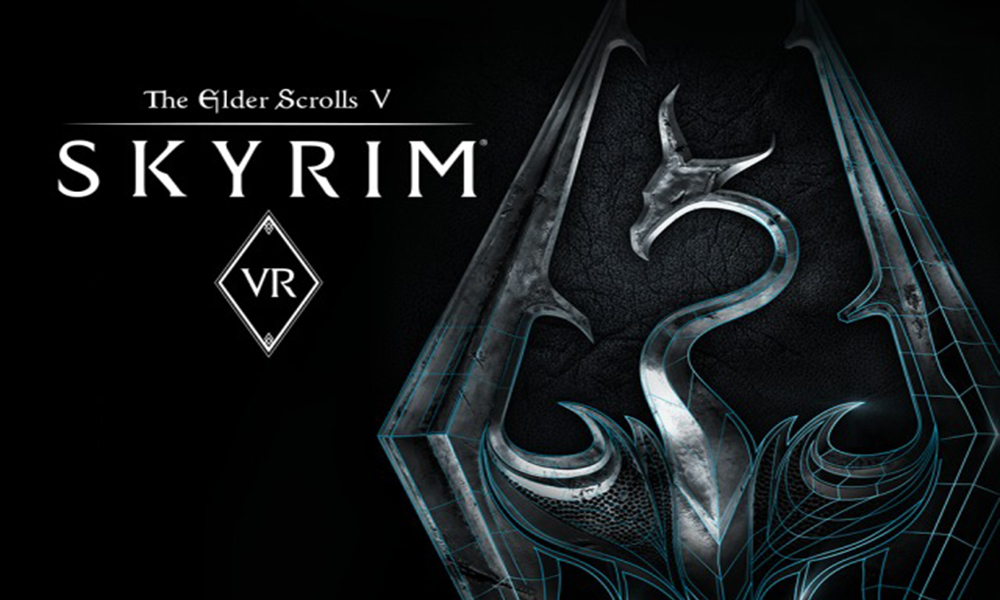 Fallout 4 VR was a mess at launch and there haven’t been too many updates to change or fix the things that the community has pointed out about it. There are still strange clipping issues, scoping in on enemies feels weird and the blurriness is still a problem for most people.

You can tell that the developers behind the VR ports from Bethesda learned a lot from the development of Fallout 4 VR and poured more effort and design into Skyrim VR.

Right away you are thrown into a new beautiful cave area to learn all of the VR controls and you’re able to change the controls however you desire from here. It shows you how to navigate all of the menus and learns how you want to be able to move around and what not.

You can change all of the comfort settings from here, locomotion settings and everything else that deals with VR mode in this first area. After you’re finished you are put into the main menu which is on top of a little hill in the area so the transition to the main menu is very smooth.

Performance wise, it runs a lot better than Fallout 4 does. I’m able to keep a very smooth frame rate, even while in the open world, at medium settings. For specs I’ve got an i7-7700k, GTX 1070 and 8GB of RAM.

Getting into the game is easy and the intro is still the same. They have a solution for being able to walk out into areas you aren’t supposed to by instantly teleporting your character back to the middle of the area you were supposed to be in.

An example of what I’m getting at is in the intro of Skyrim where you’re being transported to Helgen as a prisoner. I thought I was going to be able to walk right out of the cart since I’m playing in room-scale mode but it wasn’t possible, I kept on being teleported back to where I needed to be.

I like this because in Fallout 4 you can simply walk though walls and what not if you angle yourself just right and it ruined the immersion factor. In Skyrim VR, I feel the most immersed I’ve ever felt with any VR game.

But there are a few things, which many have pointed out in their reviews, where Bethesda could have gone all in on to create the ultimate experience for VR.

You don’t actually pick up objects, they simply snap to your controller. Picking locks is exactly the same as the base game, just that you’re using a touch pad instead.

Two-handed weapons aren’t used with two hands, you can’t see your character model at all and it’s kind of awkward using a shield to where you can’t maneuver as well as you’d want to.

Those along with other small details are missing from the game but it’s not so much to where it ruins the experience. The port is enough to the point where modders are going to be able to fix most of these issues and with a couple of updates already released, hopefully some of these things will be changed!

Now onto some of the experiences and what it feels like to be playing Skyrim in VR. What it’s like to actually be the Dragonborn in the lands of Skyrim…

Dragons are huge man. In the base game, playing on a TV or monitor, you see the size of the dragons and they’re huge! But compared to standing next to one and actually having to look up and see the sheer size… it’s breathtaking.

You know that part in the intro where Aludin crashes his head into the tower and blows fire into it? I was fully aware that was about to go down but when he executed I jumped and yelled out loud because of how big he was and how immersed you get when you’re actually looking around in the tower.

I’ve gone far enough in the main story line to where I fought the first dragon at the west watchtower and let me tell you… I’m very excited for battling dragons as I go through the world.

I’ll probably end up getting mods to be able to adjust how often they spawn just as I did in the base game but combat and fighting is so much more fun compared to the regular version.

I’m doing a necromancer/one-handed warrior type build because I’m playing on expert difficulty and love to summon the atronachs. It feels awesome holding a spell in your hand and the light from the spell actually reflects light off of your weapon, it was pretty cool noticing the little detail they put into it.

Fighting a dragon, you hop in and out of cover shooting arrows and if you’re brave enough, you run up and start slashing away once they’re injured enough.

There are ways to adjust how hard you have to swing as well as the angle of the bow to make it different through editing the INI files but I haven’t messed around with them yet. Swinging a weapon sometimes feels like it would be easy to accidentally hit someone that you didn’t mean to simply because you’re putting your hand back down too fast.

Once you’re in on the dungeons and fighting spiders, bandits and the like then the combat feels smooth. Some have complained saying that combat in other games is better and in some cases yes, the combat is better even in some indie VR titles.

But in my opinion, they don’t really look at the bigger picture. They’ve have to redo the entire combat system for Skyrim if they wanted to have more realistic blocking and hit boxes and that takes a lot more time and work than the average consumer realizes.

How the combat is, I’m happy with. It’s basically what I expected it to be and it’s nice enough to where it doesn’t bother me that I just have to have my shield out in front rather than exactly where someone is attacking me from.

Some Features Are Missing

I would have loved to actually use two hands to use a two-handed weapon. It would be nice to be able to see what my character looks like even if it was a toggle for a separate 3rd-person camera. Even better to be able to look down and see the armor I’m wearing.

It’d be cool to actually hold things in my hands and have better physics for throwing things. Seeing my hands holding whatever weapon I’m holding, being able to shout actual Dragonborn powers without mods… there are a few details they could have added which they’ve basically left the modding community to add in.

I can see how some people think Bethesda got lazy with some features of Skyrim VR but I’m thankful to have the port that they have today and the modding community is definitely going to make it better.

They’ve released a couple of updates already fixing bug issues and adding more features such as seeing your hands when your weapon is sheathed and some world map features… Hopefully they keep up with these updates!

The graphics are great for being in VR and they’ve done a great job making sure that the immersion is there. That’s what VR gaming is all about anyway.

Don’t expect to have the game looking like the official screenshots that you see on the store page though as the in-game resolution doesn’t reflect that. 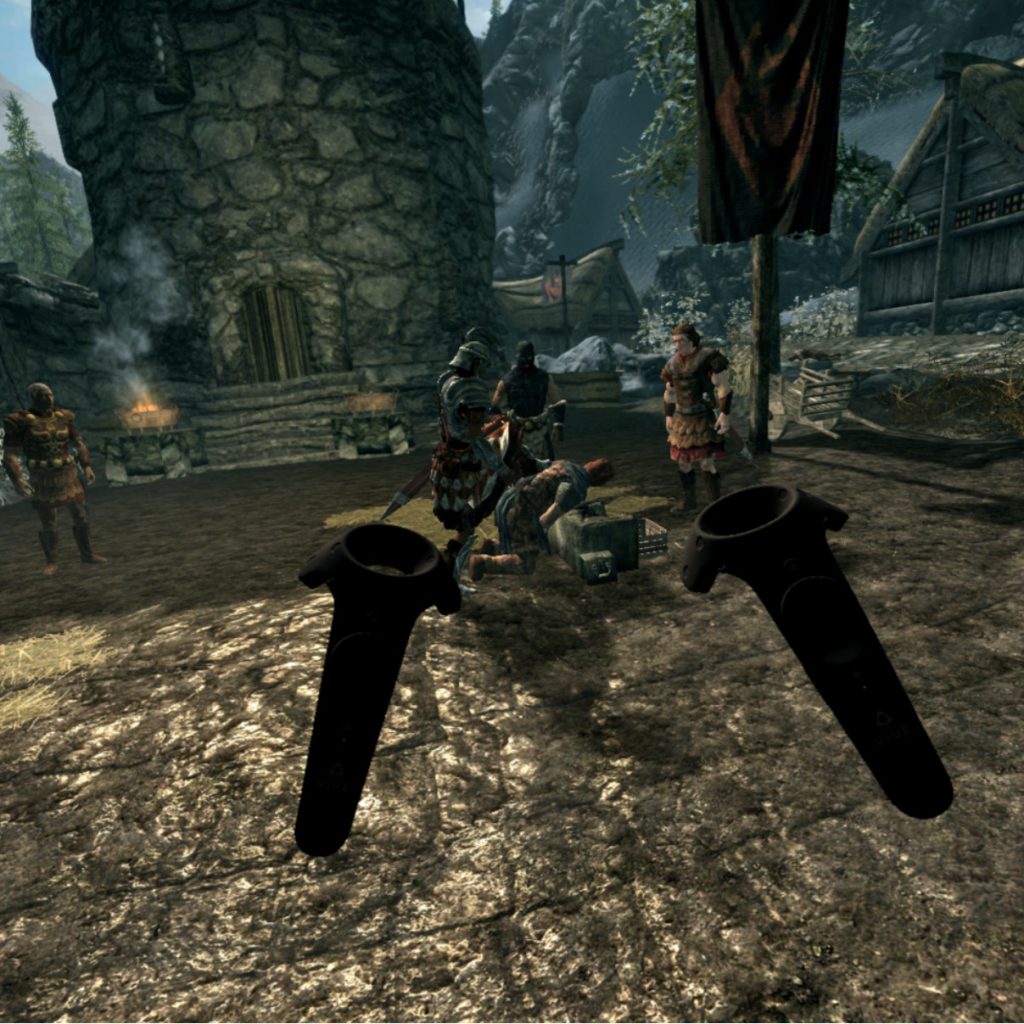 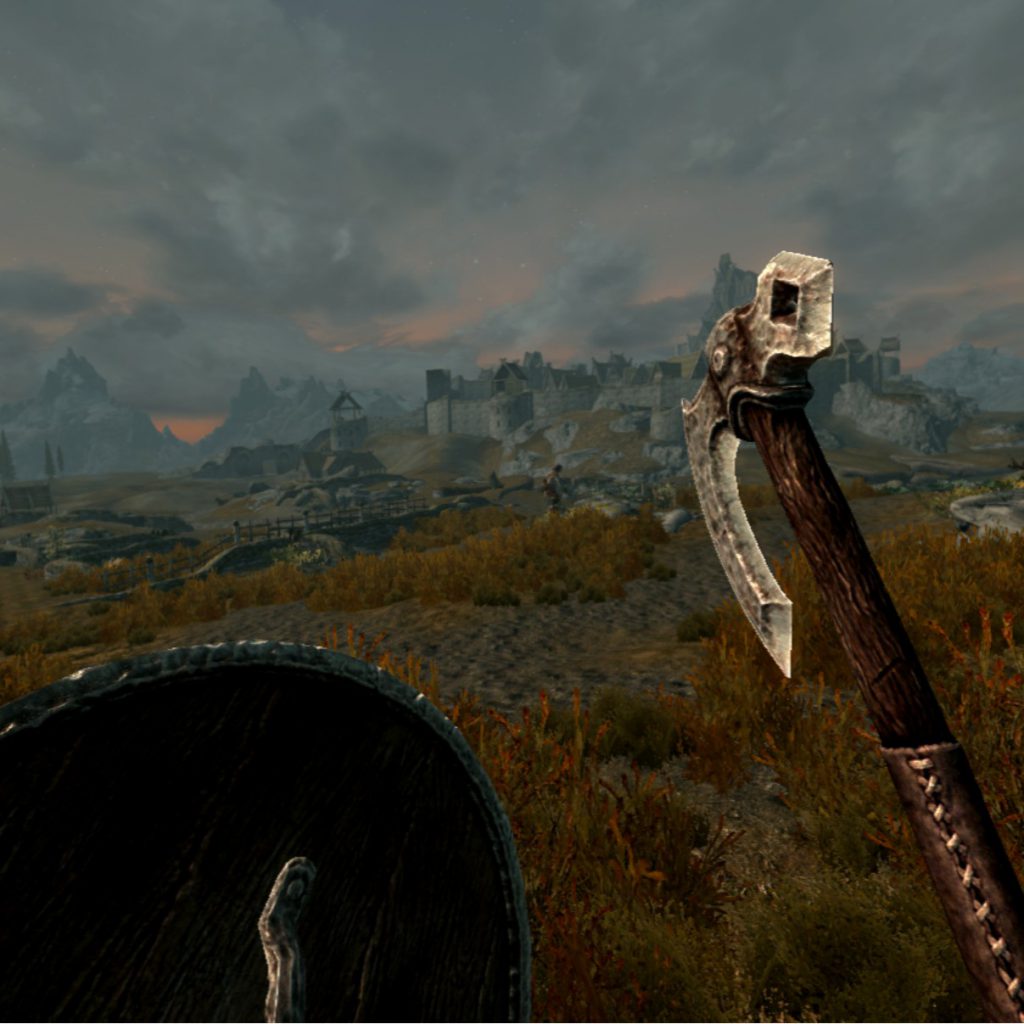 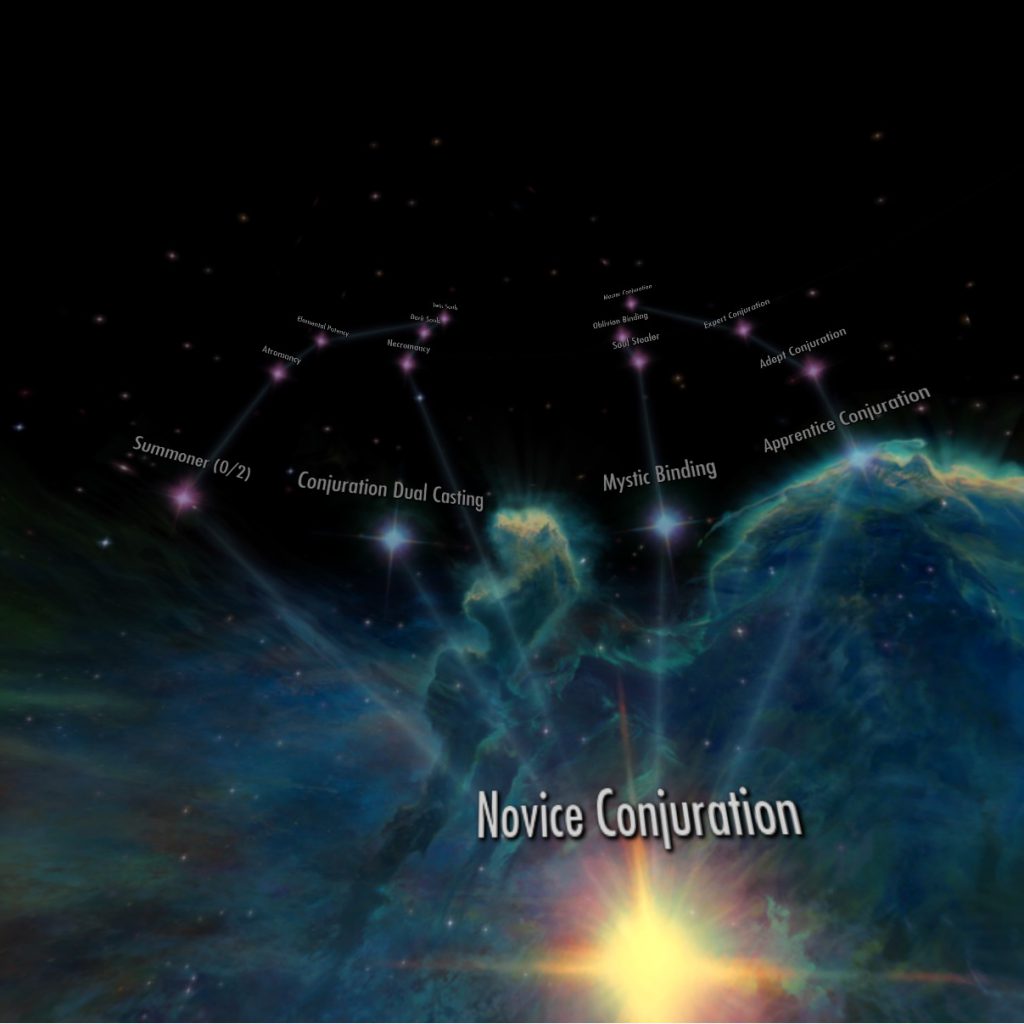 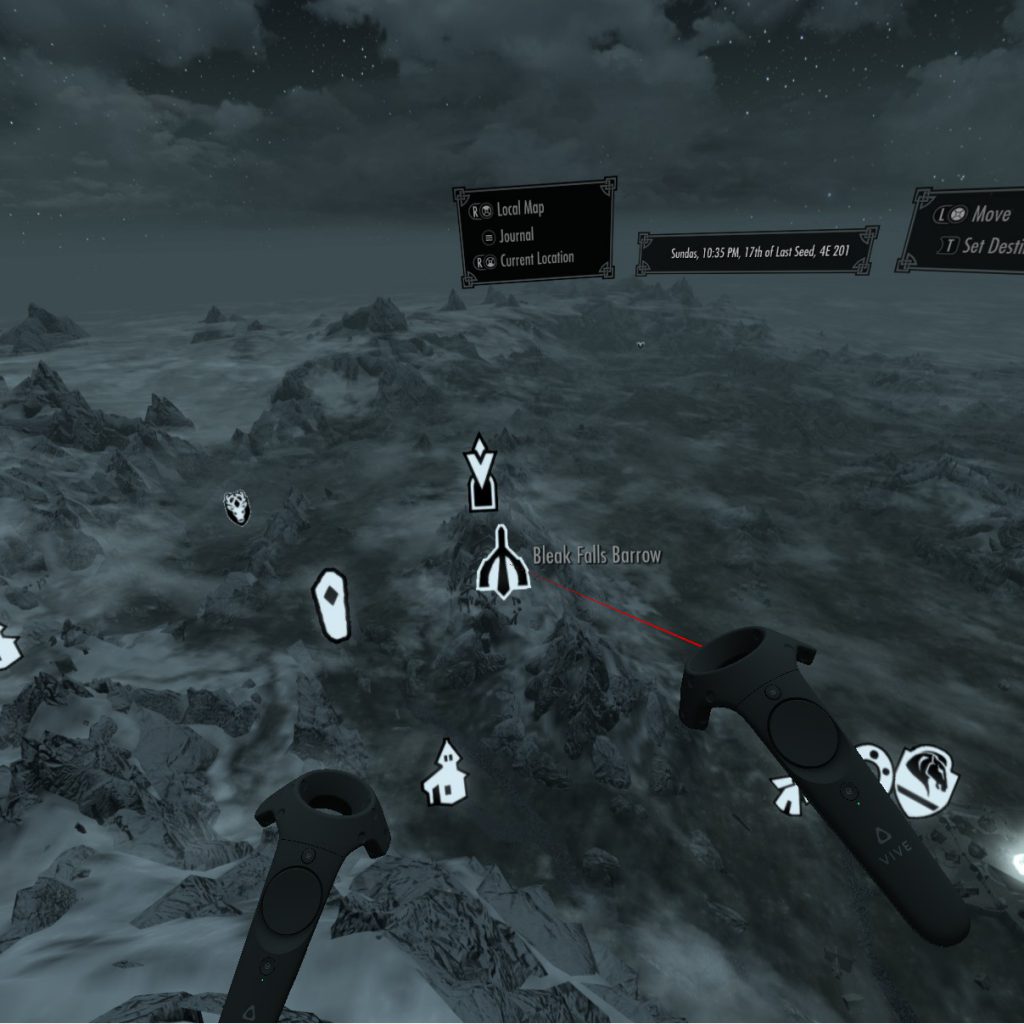 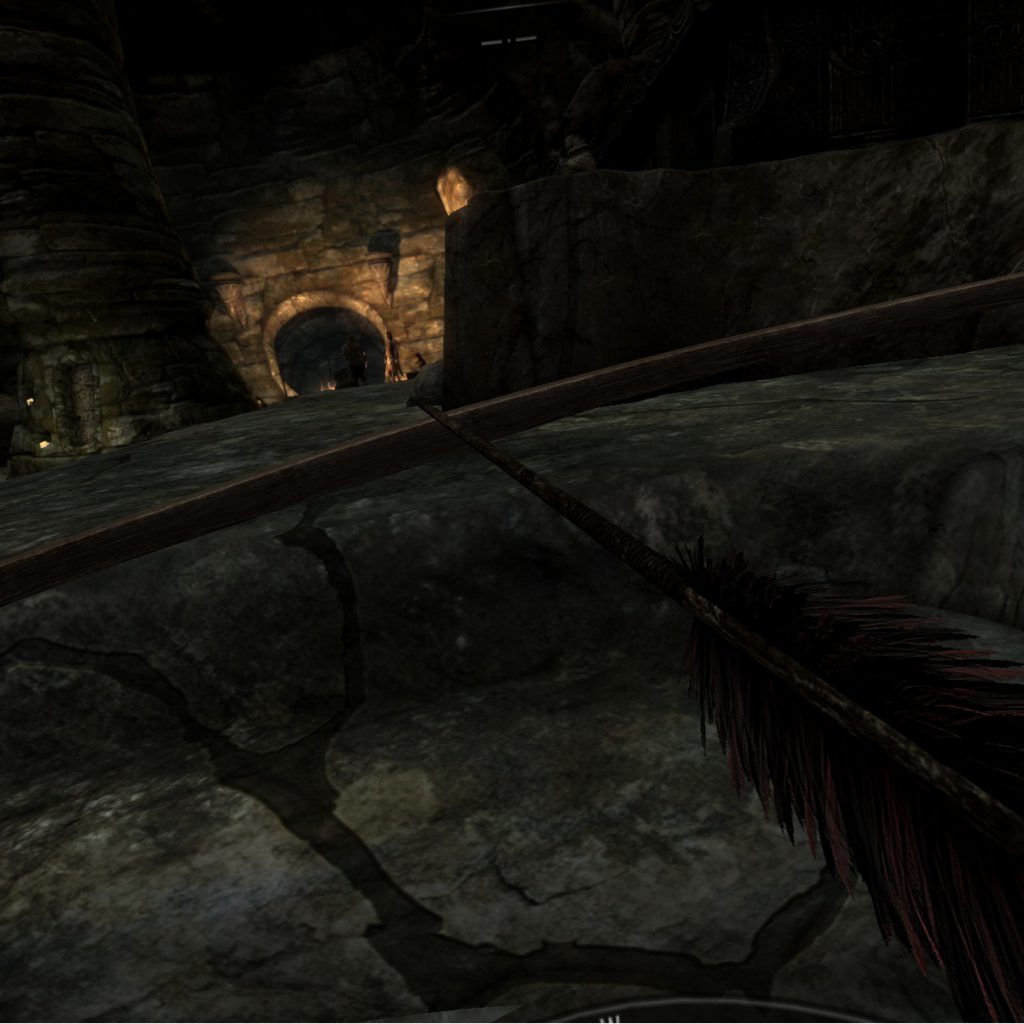 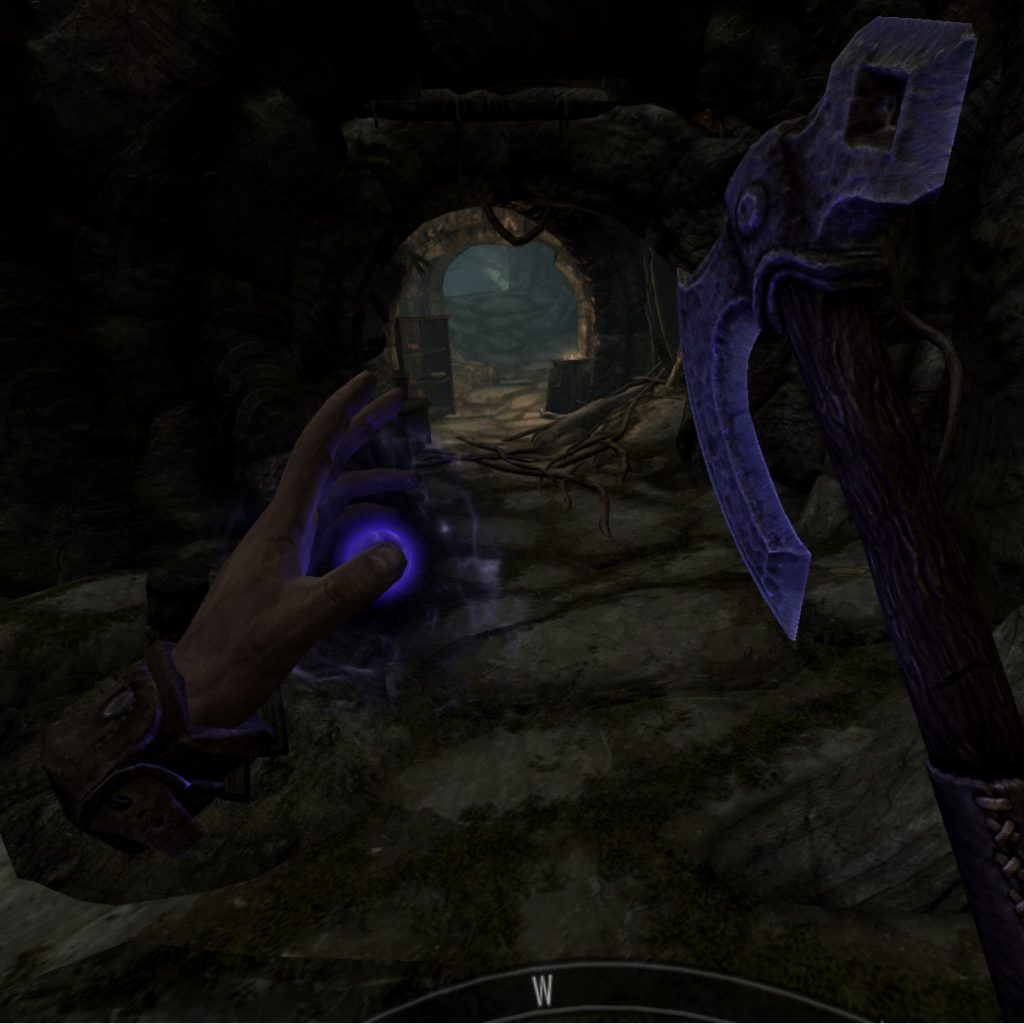 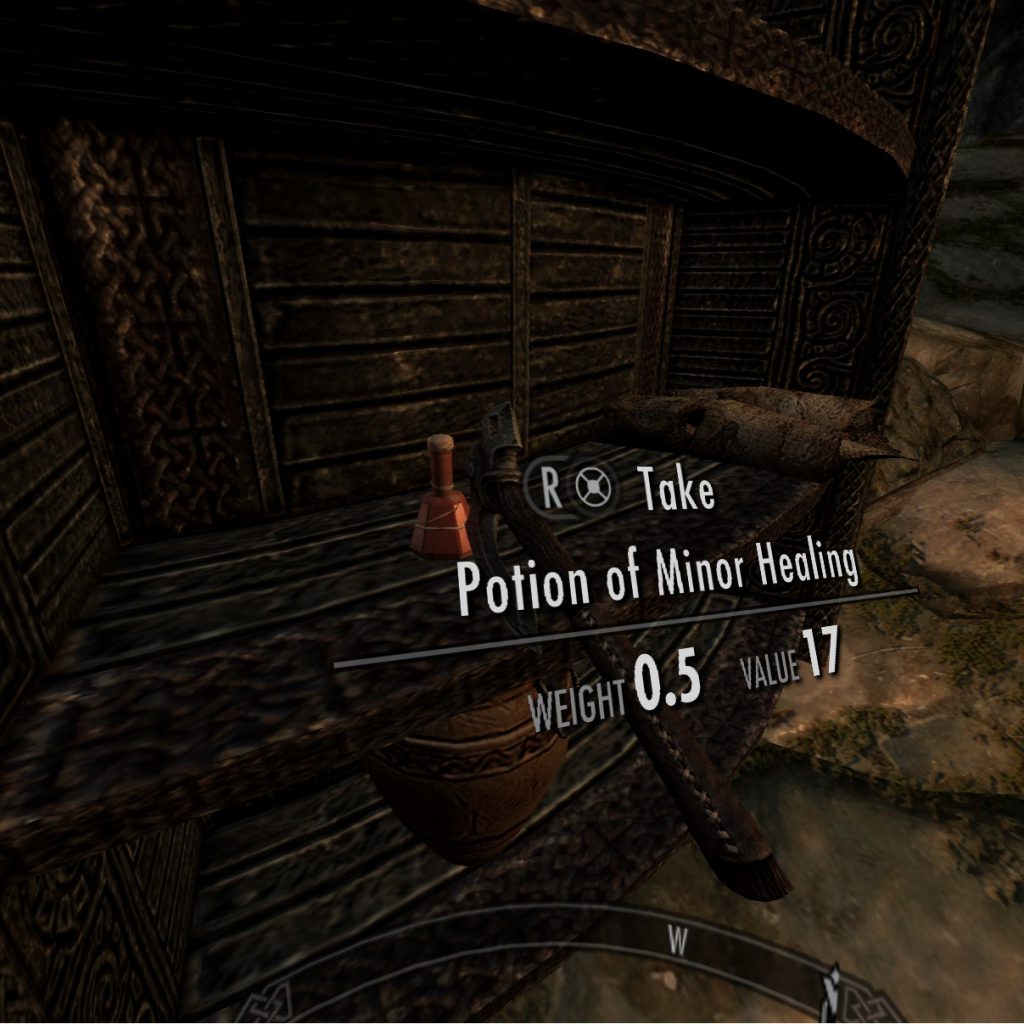 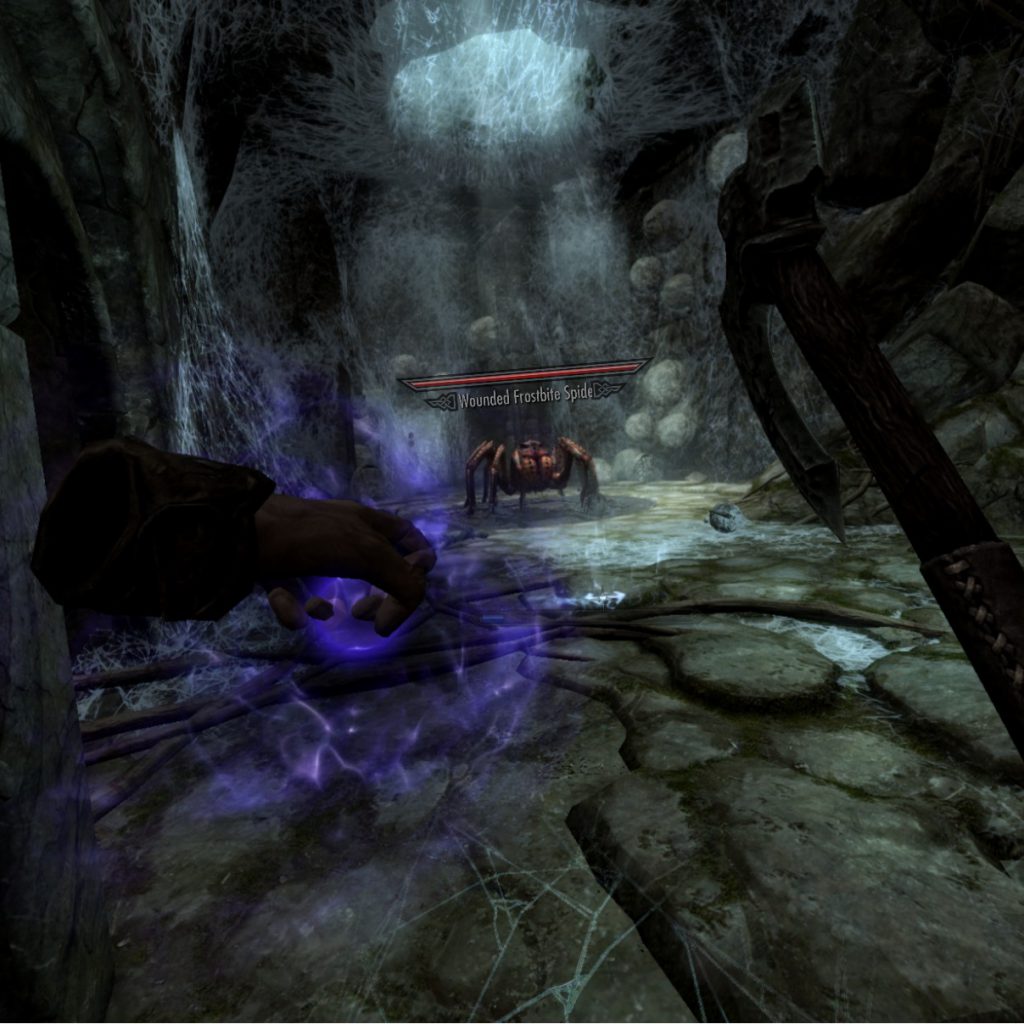 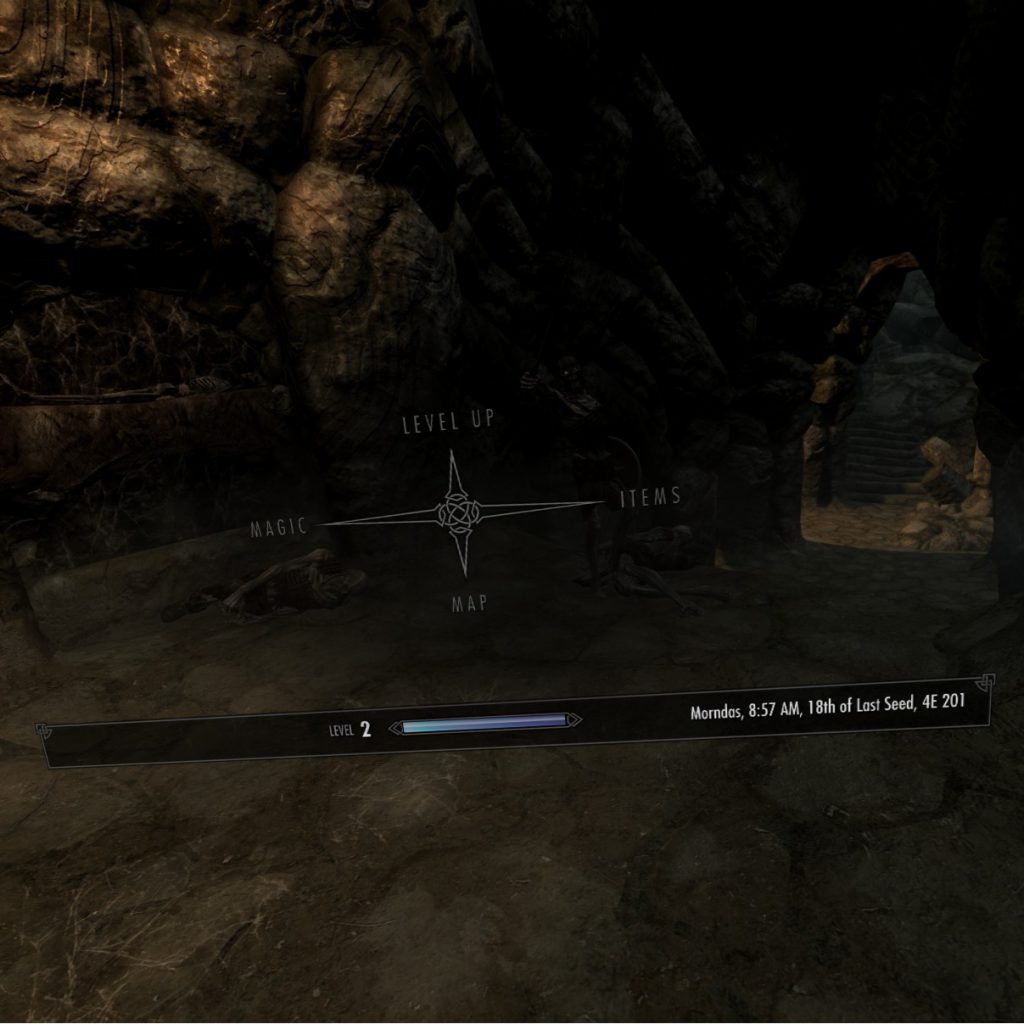 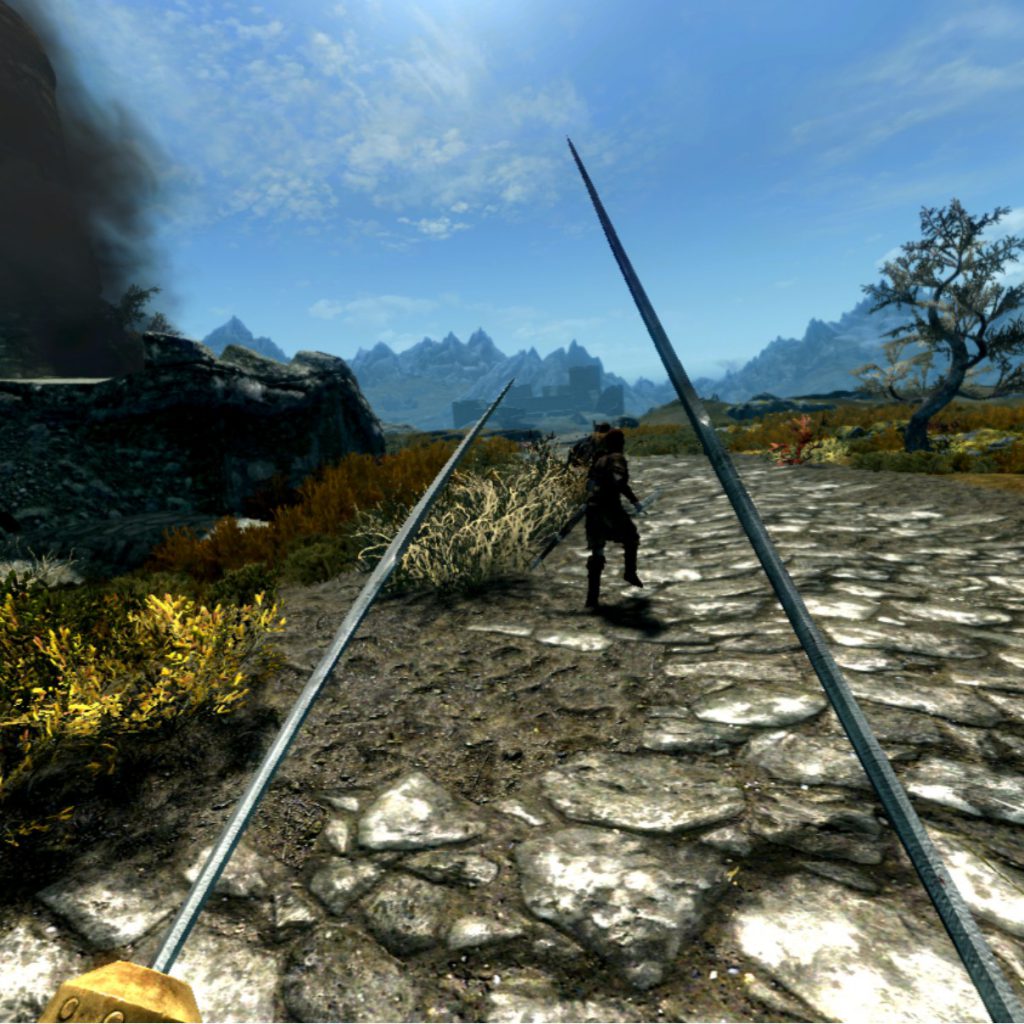 There are a decent amount of texture mods that have been proven to be compatible with Skyrim VR and I’m looking forward to diving into all of the different mods and see what kind of experience I can tailor to.

All of the above screenshots are taken of the vanilla experience, I do not have any mods installed yet!

All in all, Skyrim VR is ported to the point of a smooth experience with combat, menus and what not. It’s what you expect the VR version of Skyrim to be with a little more added in.

As I mentioned above, there are some features that seem like they should be there and they missed the mark here and there and for those that are nit picky, they don’t enjoy the port.

Personally, I think the port is more than what we all expected. It’s a lot better than Fallout 4 VR on both performance and the overall port itself.

Hopefully Bethesda keeps on updating Skyrim VR with bug fixes and features just as they did with the base version and hopefully mod support gets easier. I’m looking forward to seeing what the community comes up with!

So, have you ever played Skyrim VR?

What features would you like to see through mod support?