Although an older game that released back in October 2013 – Path of Exile is easily one of the very best action RPG games that I’ve ever played on PC.  With it being 100% free, it’s definitely worth at least trying it.

When I first saw it released as a free title on Steam I didn’t think that it’d be for me, I figured it’d just be a copy cat of all of the other action RPG games out there like Diablo III.

Little did I know that it’d basically be the exact version of an ideal action RPG game to me. It’s a lot like Diablo III, sure, but it has so many unique features about it that make it its own game entirely.

I still don’t understand why it’s a free game though – I’d pay whatever they asked because it’s just that good.

I’ve recently been taking a look at different titles on Steam because I’ve been itching for a new adventure/story.

I’ve also been really digging into different multiplayer games so Path of Exile really sounded like a good fit for me.

Progression is why this game is so fun, there’s something about completing quests and the real-time action with each click – that’s what I love most about the action RPG genre and this game makes it almost perfect.

From the 7 or so hours that I’ve played so far, it looks like each area will have a good few locations to travel and use waypoints to and each portion of the story is divided into different acts.

So the first area is called Act I and you start in a very dark place as you’ve been exiled there. At the start of the game you’ll pick a class and each class has its own unique character and back story.

Though what’s so great about the class choices and overall progression is that you can really use whatever styles of combat you’d want together. My character right now has traits and skills that best suit a player wanting to use dual weapons and a bow.

There are an absolute plethora of passive skills and moves that really makes it so that there’s no specific build that is better than the rest. An optimal build would be whatever best suits your exact play style. 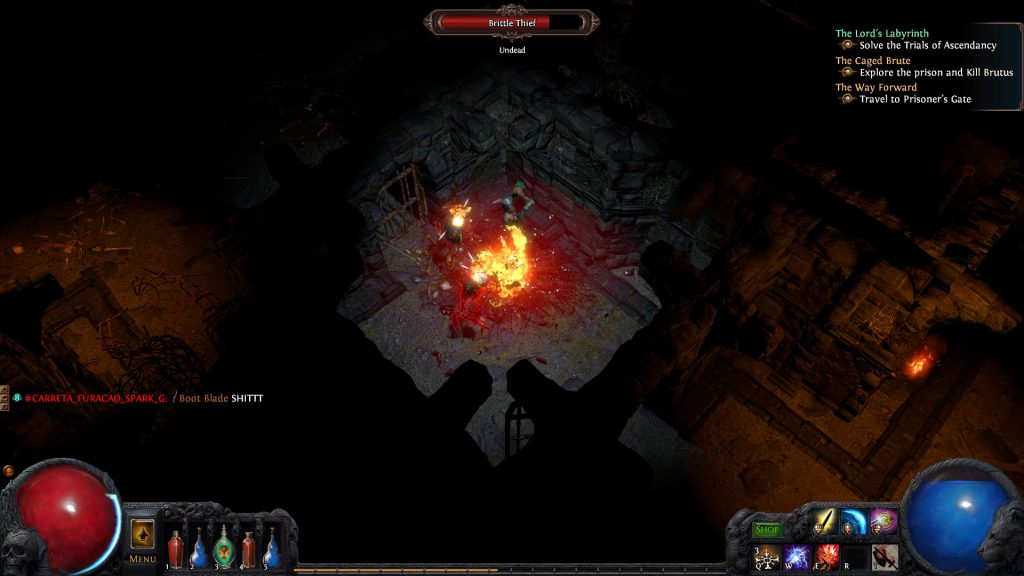 Magic skills/moves are obtained by inserting sockets into different weapons and/or pieces of armor. There are different colors of sockets and each gem that fits into the different sockets will add different magical abilities and buffs to your characters.

For example, on my axe I have a gem inserted that does loads of fire damage to enemies and enemies around them. On my chest piece of armor I have a gem that allows me to set traps to entangle enemies making them an easy target for my bow.

Different weapons that you find in dungeons and shops have different amounts of sockets and colors. There are also different items that allow you to change the magic abilities of different gear as well as which sockets are on the weapon.

There are just so many ways to build a character. Each class starts at a different spot on the skill tree but you can build in each area of the entire tree with any character.

This lets magic players also being able to deal loads of melee damage. Or archers that rely on magic to stun enemies and shoot from afar.

I’m a huge fan of this type of character progression system and it makes the top-down action RPG genre really fun! I’d pay over $40 for this game but it’s free-to-play on Steam.

It doesn’t even have any “pay-to-win” mechanics either. You can spend real money on micro transactions to add more slots to your storage or to make your character look cool with different cosmetics. That’s it.

These guys are doing the free-to-play and action RPG mix extremely well. I know that I’ll be playing this game for a long while!

As I said above, each area is separated by different Acts and each Act has its own quest line and areas to explore.

There’s a main quest line with a few bonus quests along the way and so far the overall story is pretty awesome. You’re exiled to a land full of monsters and you’ve got to pave your way as an exile of the land. Each class has their own reason as to why they’ve been exiled but to not spoil the experience, I’ll leave it to you to get into them when you play. 🙂

As you explore and complete quests you’ll level up, meet other players and unlock many different areas that reap more rewards. I’m just about done with Act I and the diversity of the atmosphere of the different areas were pretty awesome, I never really felt that I was on the same old grind killing the same old enemies all the time.

My favorite part about exploration is all of the loot that you can find as you open chests and defeat enemies. There are so many different weapon types all that can potentially have its own magic buffs… it’s fun finding the best loot to equip and also to sell for different types of currency.

There’s also a pretty cool PVP (player versus player) system as well. You can duel anyone at any time, you simply right-click a player in town and challenge them to a duel. They can either accept or decline and if they accept, you’ll be loaded into a random PVP arena based on how many people are in the duel. 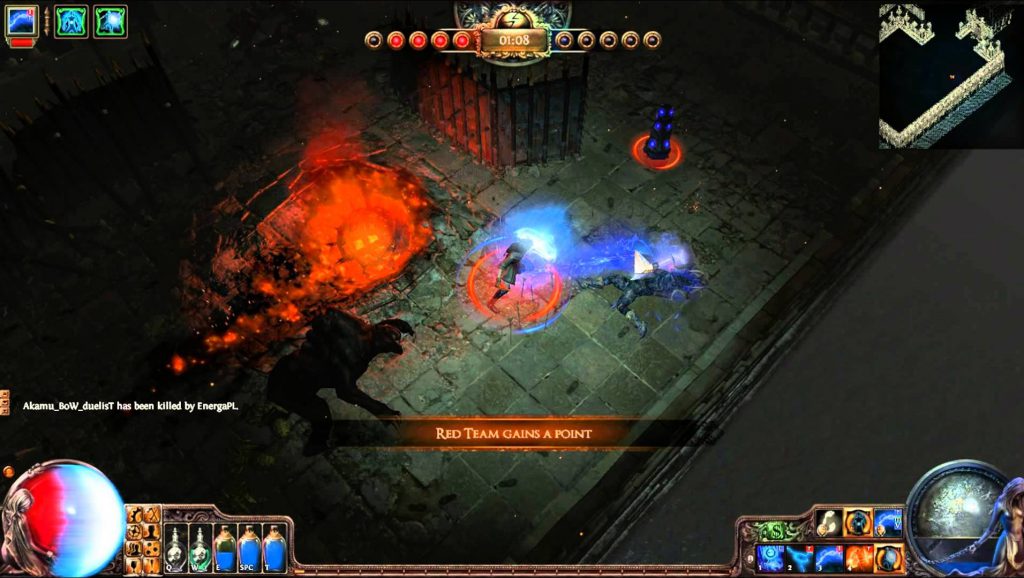 For example, if you’re playing with a friend or met someone that you wanted to play with you could invite them to a party or join theirs. Then any area where there are monsters and quests to complete you’ll be in the same area fighting the same enemies.

This is also true for PVP, if a party members accepts a duel challenge then everyone else in the party comes with.

The game will put the players in different arenas based on how many players are in the match, so far I’ve seen 1v1 and 2v2 arenas. There are also ways for global PVP, but I haven’t really dived into it quite yet as my character isn’t high enough level to handle it yet.

I believe there’s a menu for PVP and you can enter a queue for different modes such as capture the flag or deathmatch. I’m excited to get into it once my character is a proper level to be able to handle it!

I took some screenshots of random gameplay as I ventured into different areas and gathered loot  to equip.

Again, progression is why this game has me addicted! 😀 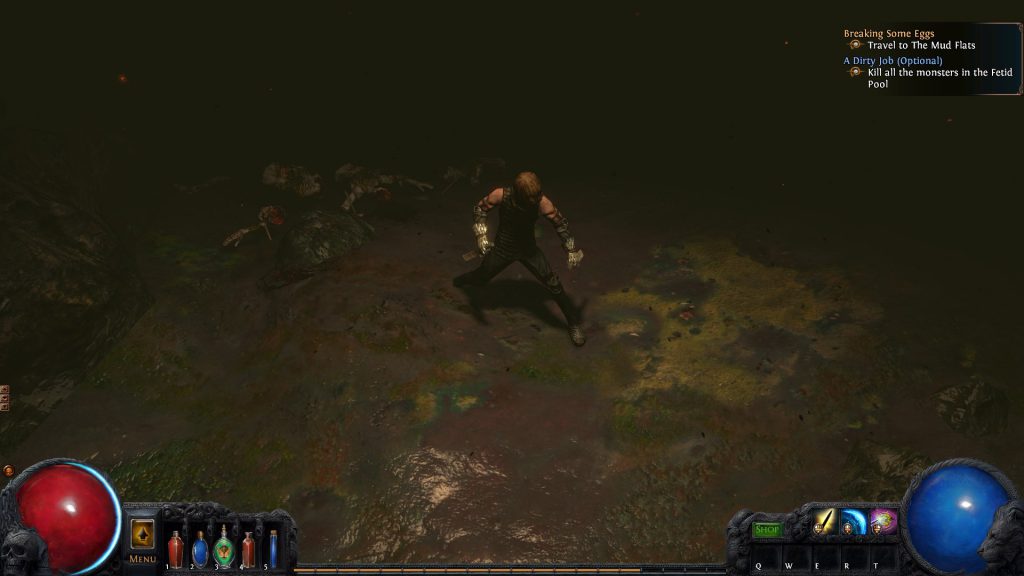 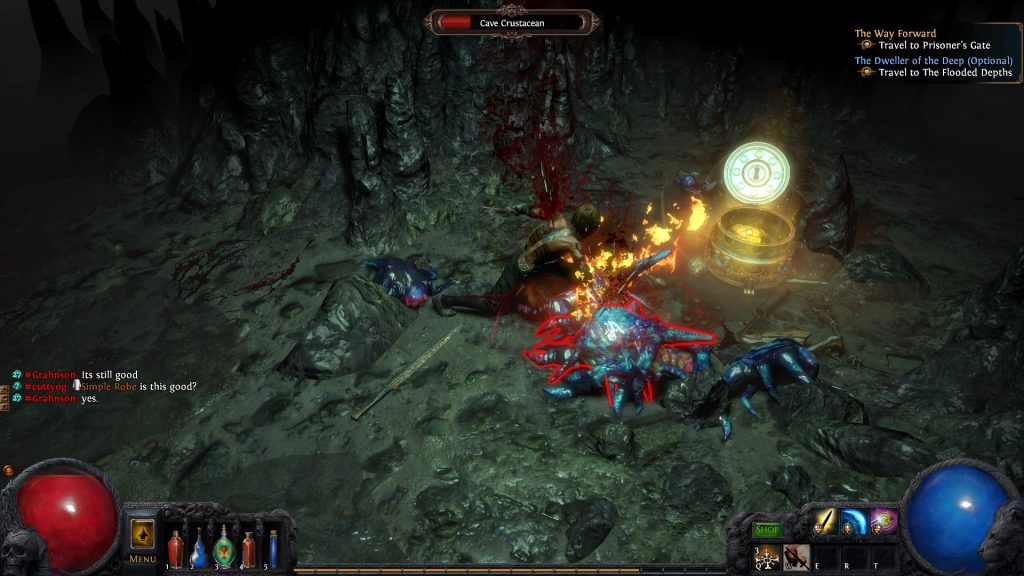 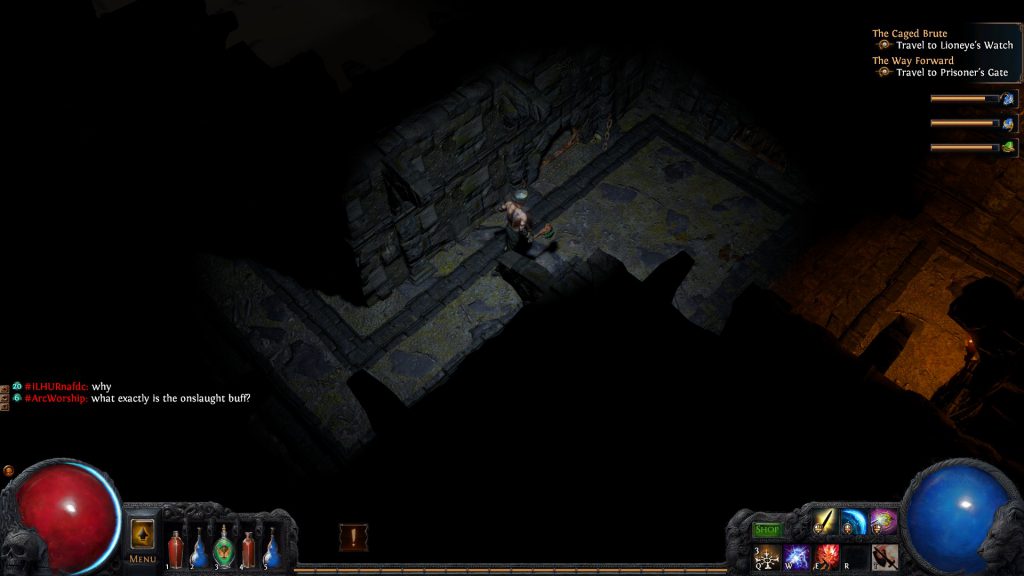 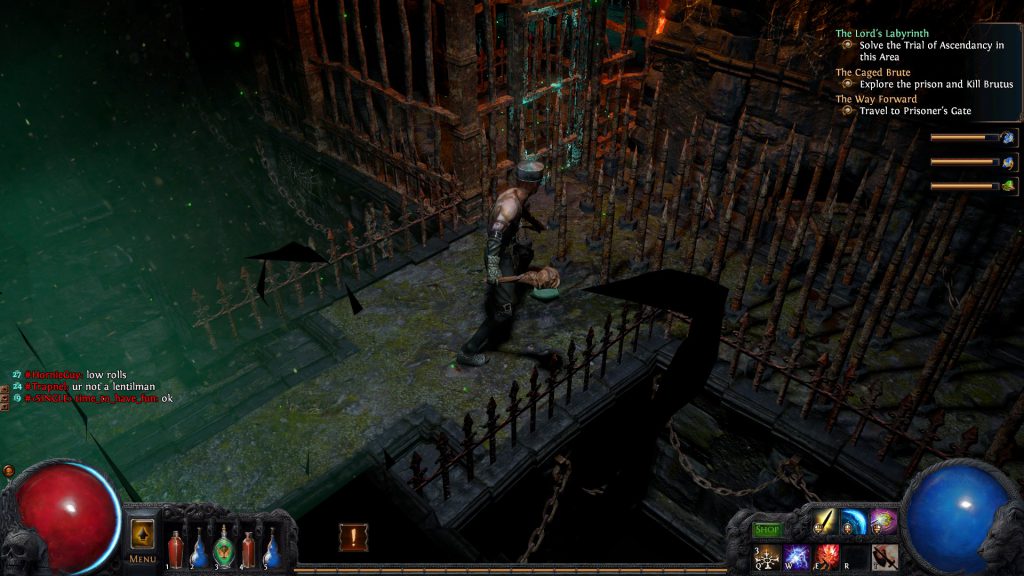 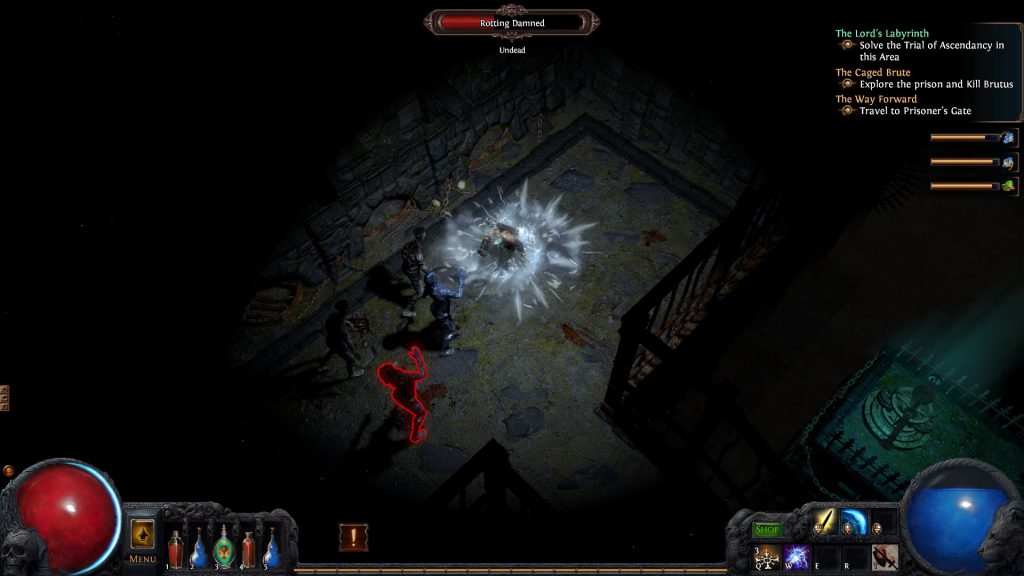 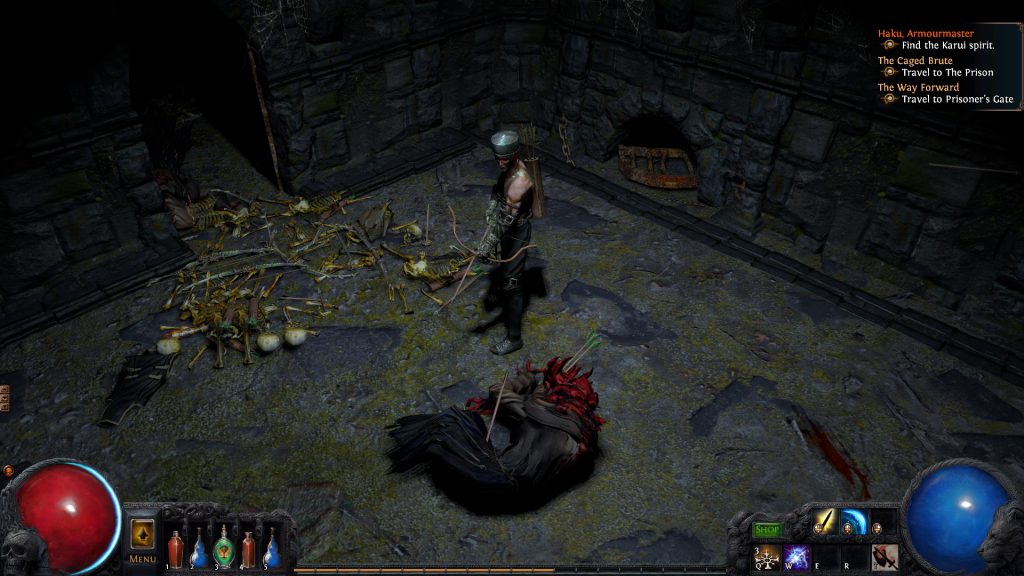 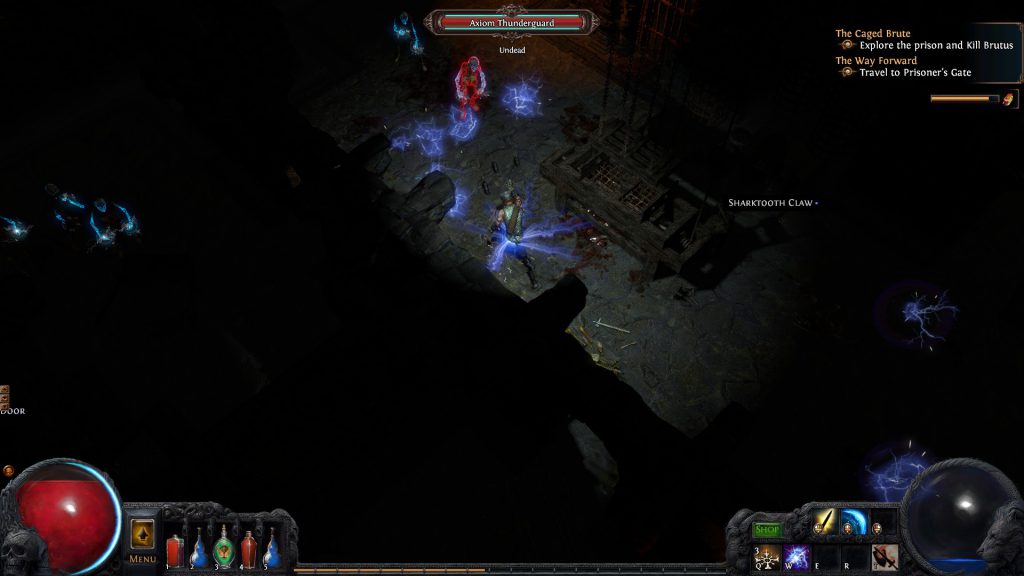 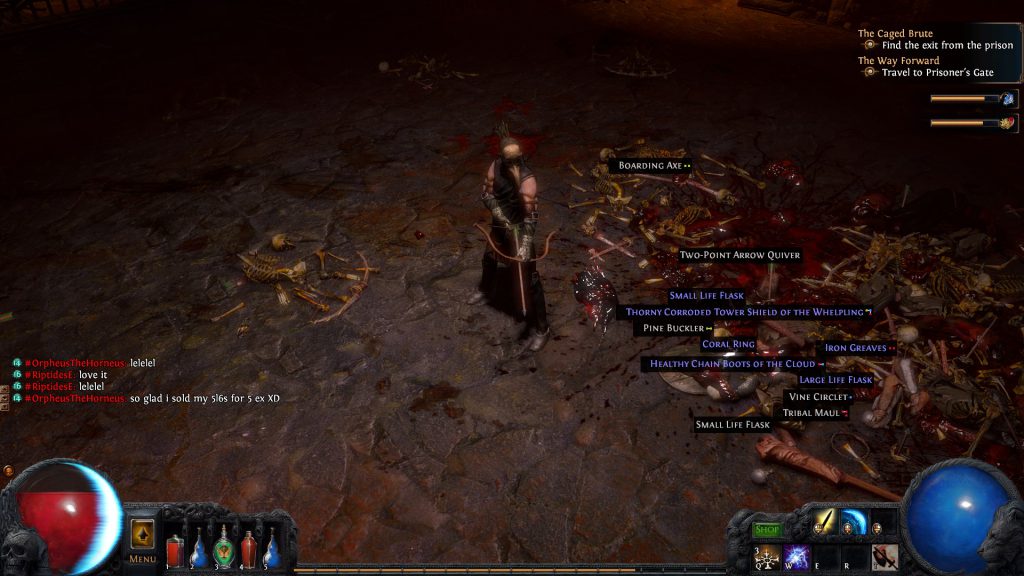 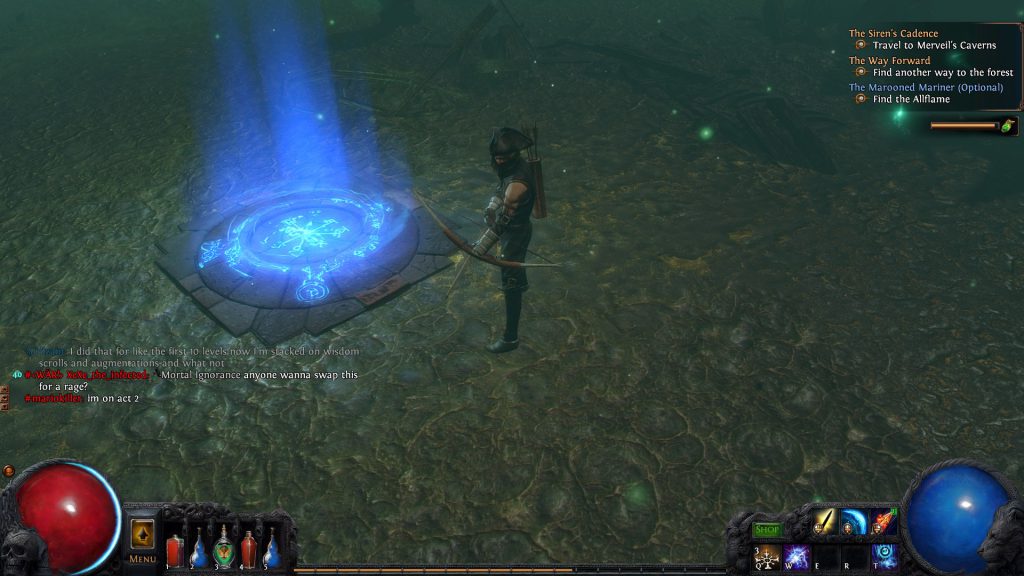 The graphics are actually pretty phenomenal, considering that it’s a free game. The animations took me a little bit to get used to as they aren’t the best in the world, but the game is just so fun that it doesn’t matter.

If you’re looking for a new multiplayer, action RPG game to play then just give Path of Exile a shot.

There’s literally nothing to lose if you end up not liking it but if you’re an ARPG fan at all, I know that you’ll get really into it right from the get go.

So, are you going to be trying out Path of Exile?

Or do you already play it?