If you haven’t heard of or played The Culling yet then you’re missing out, you should seriously buy this game. Its future is in good hands.

The Culling has just recently been released a few days ago (3/4/16) and I’ve already sunk about 13 hours into it. The gameplay is extremely fun and simple to understand yet it is also very challenging and the replay value is very high, even for it being an early access title right now.

I’m Mostly Excited For The Future

I hadn’t heard of this game at all until I saw that it was a recent release on Steam’s platform. Apparently there was a closed alpha for quite a while before its release on Steam, the dev team has been listening to its community to try and make the game as optimal as possible before releasing it as an early access title.

For me, it literally came out of nowhere but I’m so happy that there is finally a game like this. It’s basically like The Hunger Games, “The Culling” is a game show. You and 15 other contestants have to survive and murder each other, there’s only one winner.

It’s definitely the best Battle Royale game out right now, even being an early access title. It still has plenty to do! The game is randomized every time with different item spawns and what not and there are different events that can go down.

Honestly there aren’t nearly as many events and items as the game could have but there really is still plenty there to be entertained for hours and hours.\

The future of the game is what I’m most excited for though. There is only the one map yet I’m able to sink so many hours into this game and I’m going to continue to do so simply because of how fun it is! The dev team already has a development roadmap and they have said on Reddit that most of the community requests listed on it are going to be in development.

This means more maps, more items, more customization and features down the road! 😀

So far I’ve seen the dev team responding to most of the community over on the official subreddit and they’ve said more than once there that there will be no pay to win aspects to the game and that they are heavy in development and plan on adding a lot more in the coming months.

The Gameplay Is Nuts

This is one of those games that are going to get your hands sweaty, your heart is going to beat very fast and you’re going to feel the pressure in almost every single scenario.

You customize your character with different perks, a specific air drop to call in during the match and an outfit. Then you can get into a free for all match or a team based match if you wanted to and then you’re shipped over to the island that The Culling takes place on.

Yes, you start in a box. Your character breathes heavy in anticipation of what all is going to go down in the next 20 minutes.

After the box breaks open you have to get going real quick with whatever you plan on doing. I usually go straight into either farming for rocks by punching the nearest stone to me or finding 2 rocks on the ground, combining them and crafting a stone dagger.

Then I combine the dagger with a nearby branch to create a spear. I love the crafted spear in the game because it’s not only a great weapon to start out with but one of my character’s perks lets him move 10% faster while holding a spear. It makes chasing people down very easy. 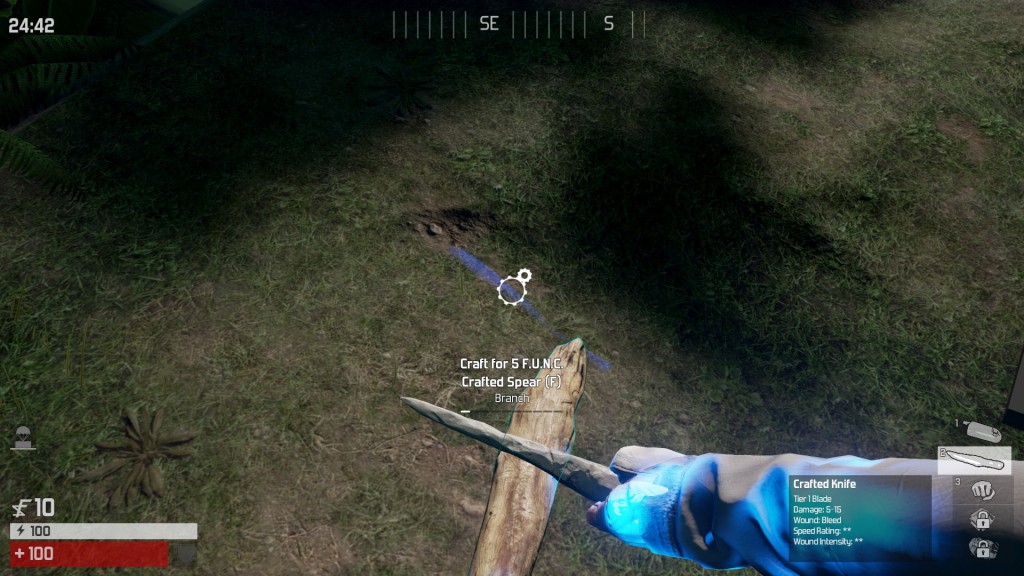 Usually I use a character that has a perk which allows him to spawn with something called a Man Tracker, it tracks the nearest enemy to me. So right after I craft my spear I’ll craft a bandage quick and then start tracking down my first target.

With the characters that use the perk to have the Man Tracker right I away I also use another perk called Stealthy which makes my footsteps almost 100% silent. I didn’t think that this perk would be all that useful but it really is because in this game, footsteps are extremely loud and most players are listening hardcore for those footsteps and other noises. Stealthy makes it so that I’m extremely silent.

This makes it simple to flank enemies and to stab them in the back with my spear before engaging in combat.

The Combat System Is Unique

I really dig what the dev team did with the combat system because it really gives a fighting chance to pretty much anyone.

You’re either attacking, blocking or shoving other people when it comes to melee combat.

If you attack while someone is blocking, you’ll be stunned for a good bit allowing the other player to land a couple of hits on you.

If you shove someone while they are blocking, they’ll be stunned for a quick second allowing you to hit the player once before they’re ready to counter whatever is next.

Sometimes I’ll hop on TeamSpeak with a friend of mine and play the team mode where there are still 16 contestants but it’s in teams of 2 so there are 8 teams in total.

I’ll be the one to track all of the nearby enemies and my friend focuses on getting a bow early on. We’ll find a building with some stairs in it and set up snares on the stairs… snares make an enemy stuck for a few seconds.

So whenever I can tell that an enemy is near on my tracker I’ll run outside and pretend like I’m scared and run into the building, leading the enemy into the snare trap on the stairs.

Right as he gets stuck I move out of the way and my buddy lands a couple of arrows into them and I jump back down to the bottom of the stairs because 9 times out of 10 the players start trying to run away after they see that it was a trap and that they’re getting owned.

Most of the time I’m able to land a good few melee attacks on them to kill them and then we get whatever loot they had on them afterwards as well as some points called F.U.N.C. 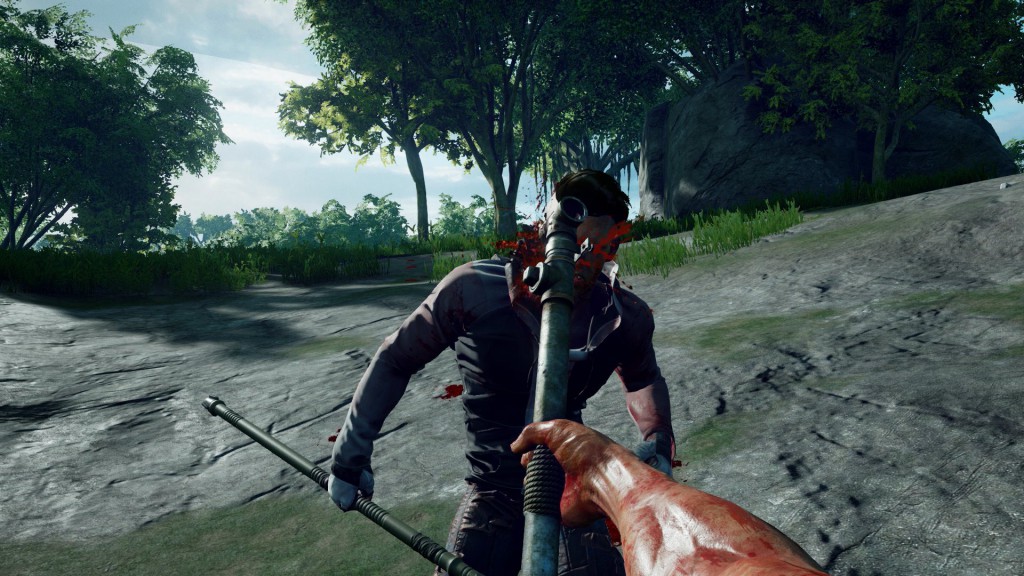 F.U.N.C. stands for “Flexible Universal Nano Compound” and it’s a compound that breaks down resources you find to their basic element allowing a player to form the rocks into daggers, daggers into spears etc.

It is the currency you spend in order to craft certain items and for other things such as opening up certain crates, using healing stations and calling in air drops.

When I go into a building and loot it out I’ll usually recycle most of the loot I find in something called a recycler which produces F.U.N.C. based on which item you are putting into it.

I like to save up my points to craft extra bandages, make crafted armor and to hopefully be able to call in an air drop since that’s how you can get most of the best gear in the game.

After getting everything I need I usually make it to the end game. After a while the map starts filling up with poisonous gas forcing all of the players to the center of the map to battle it out so that the winner can reign over everyone else.

The end game is very bloody and it’s usually within the last 5-10 minutes or so. All players meet up in the middle and whoever has the best gear usually wins. Some people actually have firearms which will dominate over any other weapon so I like to try and hide in some nearby bushes and wait to see if I hear gunshots and if I do, I like to wait until they run out of bullets.

Remember when I said that this game will make your hands sweat, your heart beat fast and you’ll feel the pressure hardcore? Yeah, this is the part that does that. It doesn’t matter which match it is, I always start really feeling the tension when it’s me and one other guy battling it out for victory.

If you win you get a chance to be rewarded with a rare tier of customization gear. I’ve won a S.W.A.T. mask and a cool cowboy hat for winning, though you get gear for every match you play. It’s just that if you don’t win you get a lower tier, common customization item.

As always for all of my other game posts, here are some screen shots that I took while playing.

This game has pretty decent visuals for being so cheap! 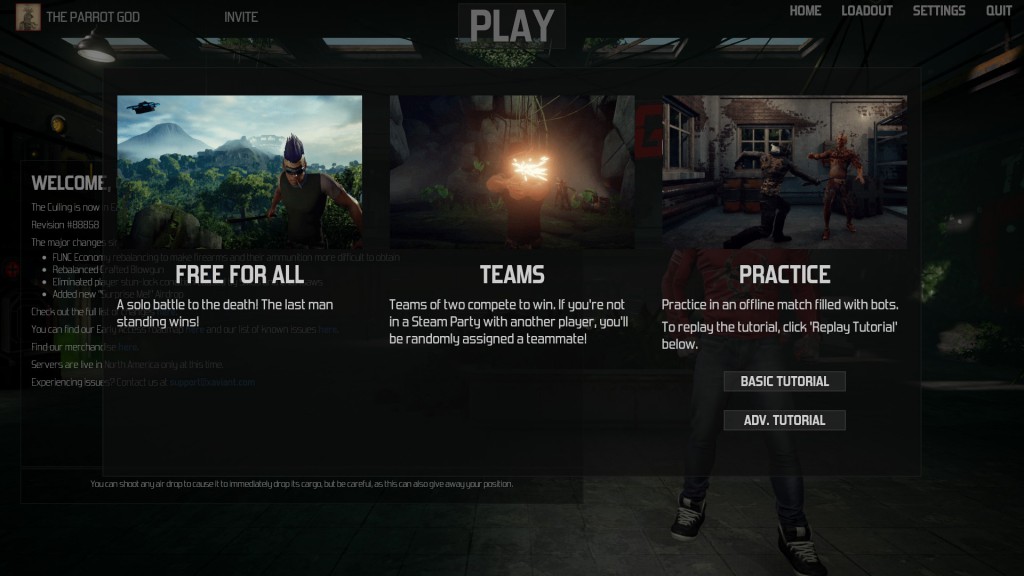 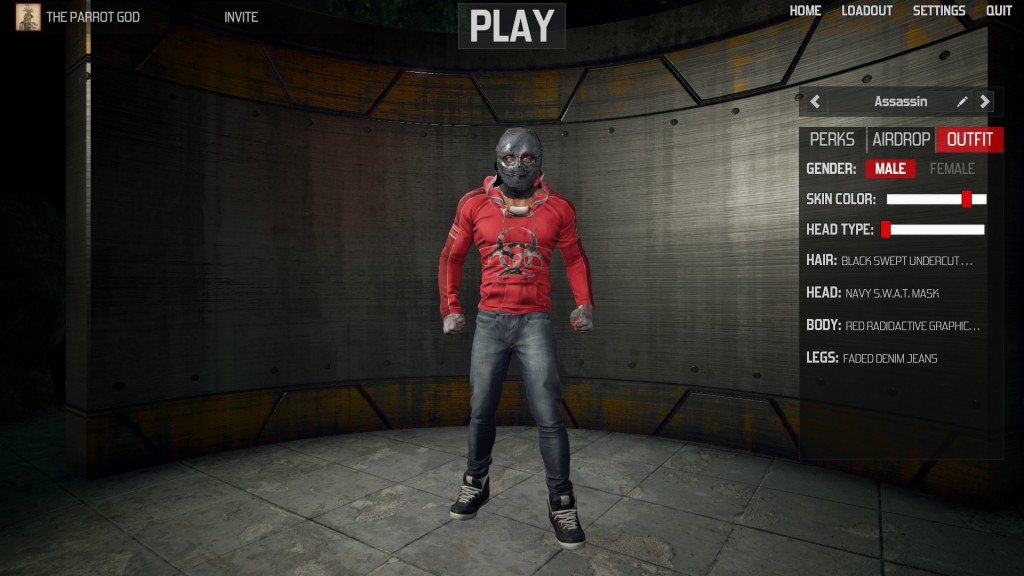 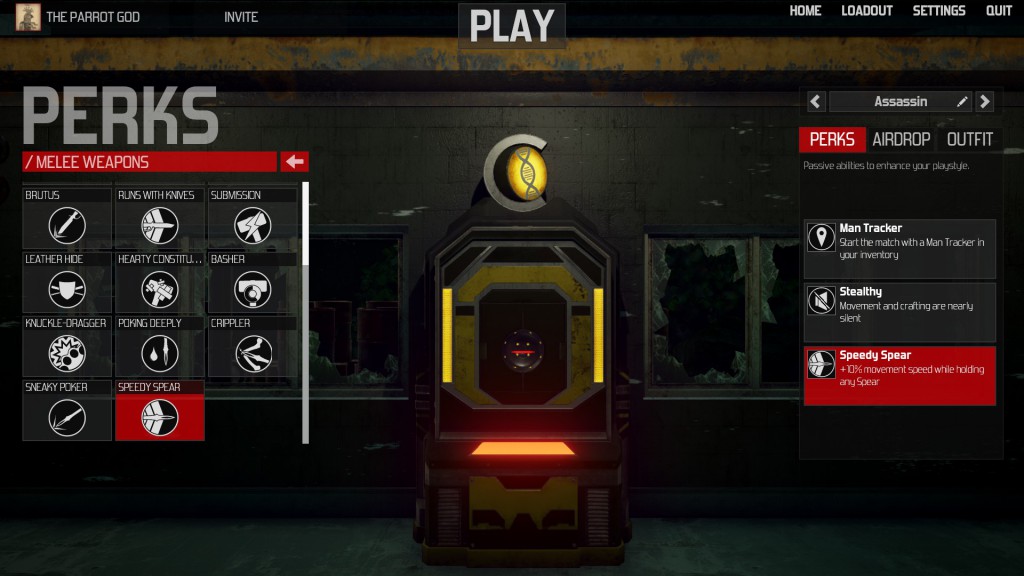 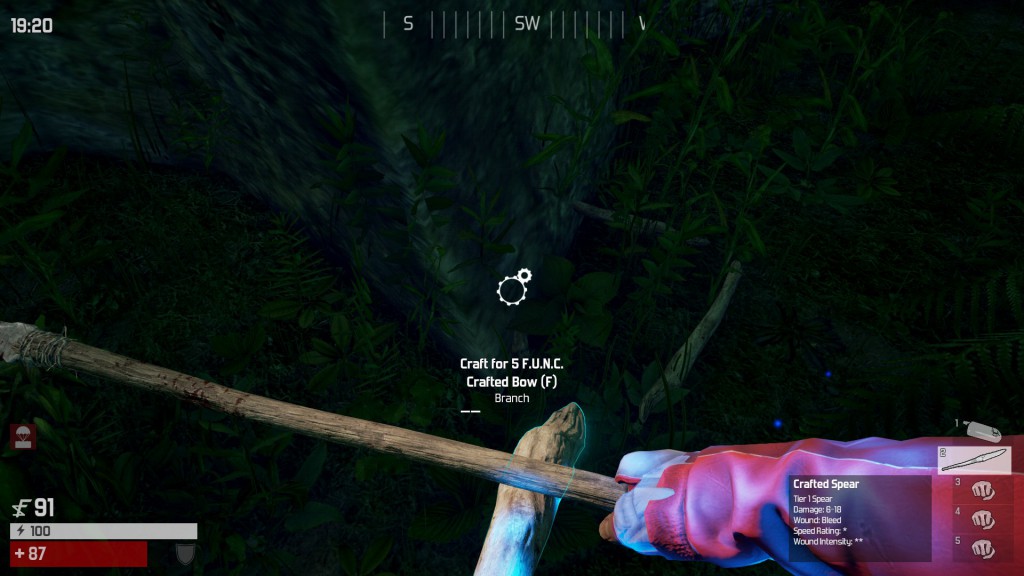 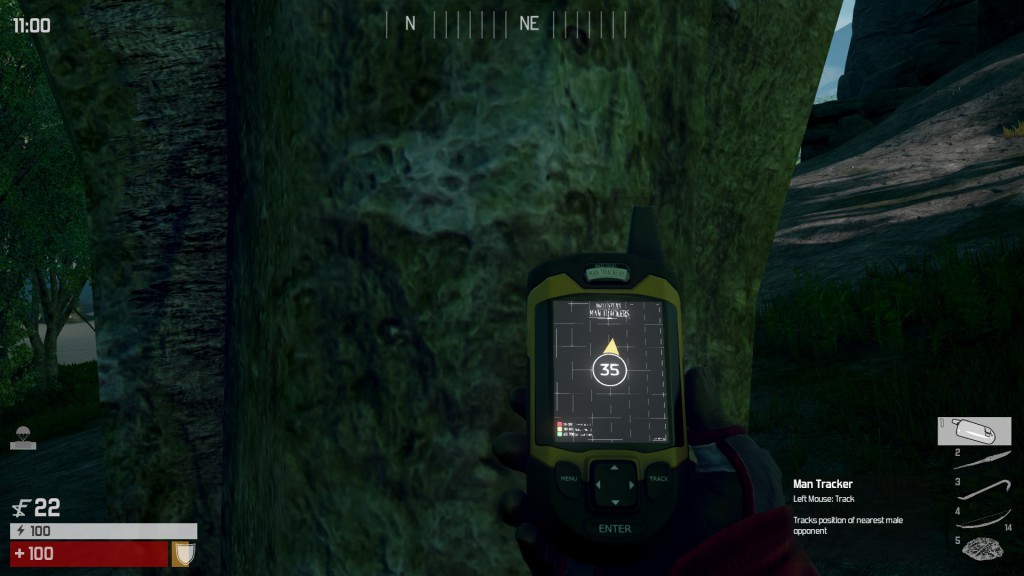 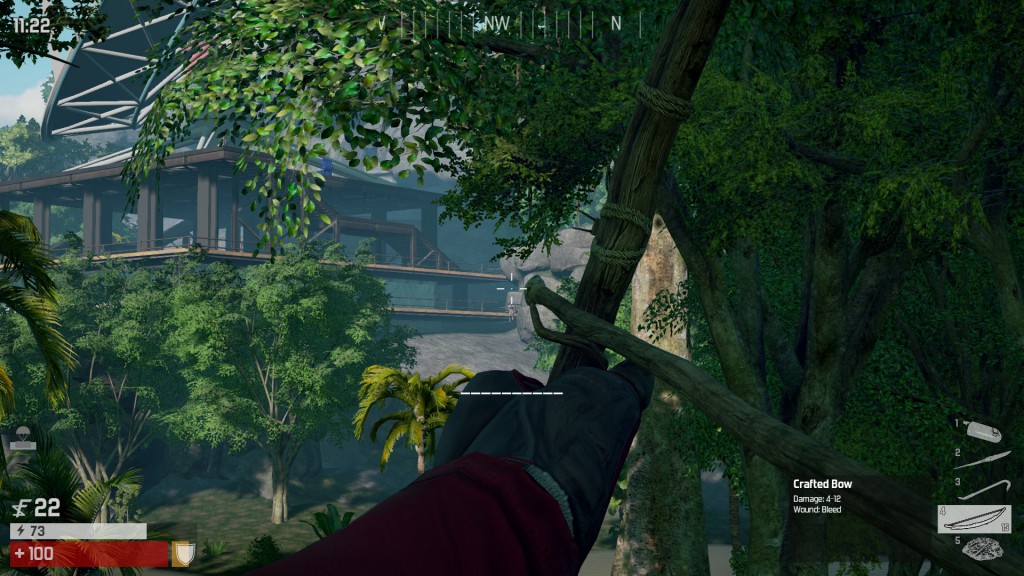 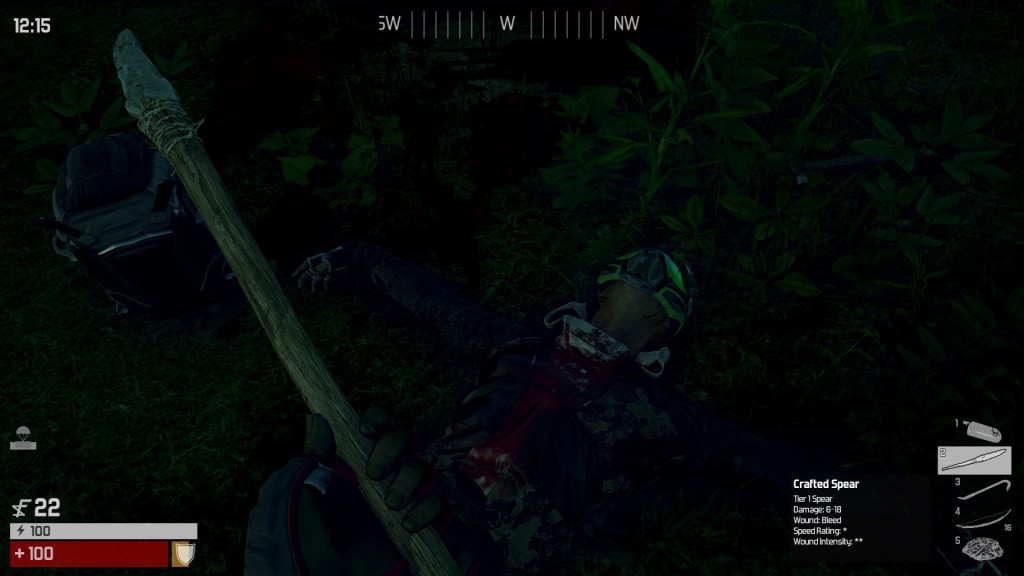 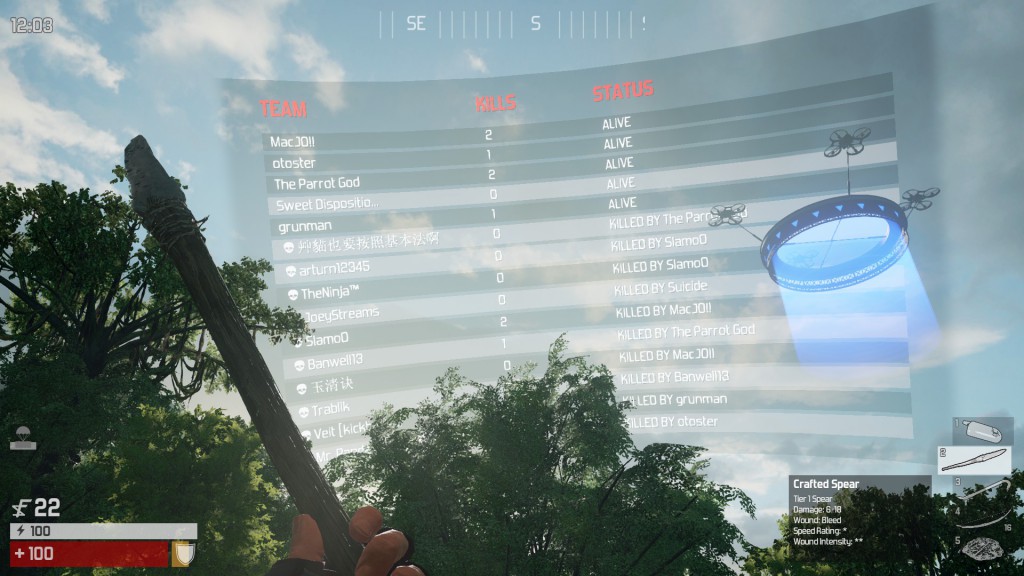 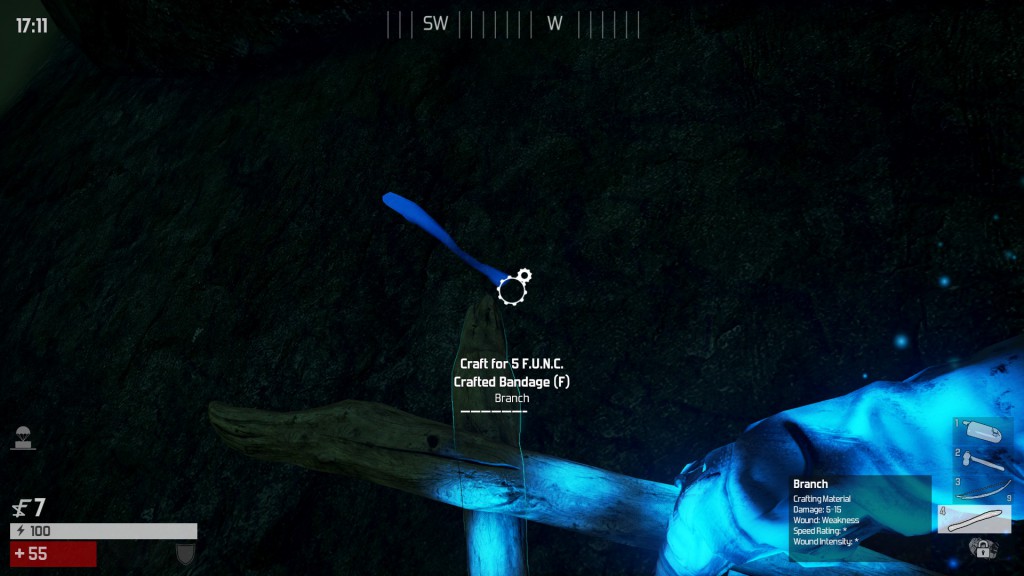 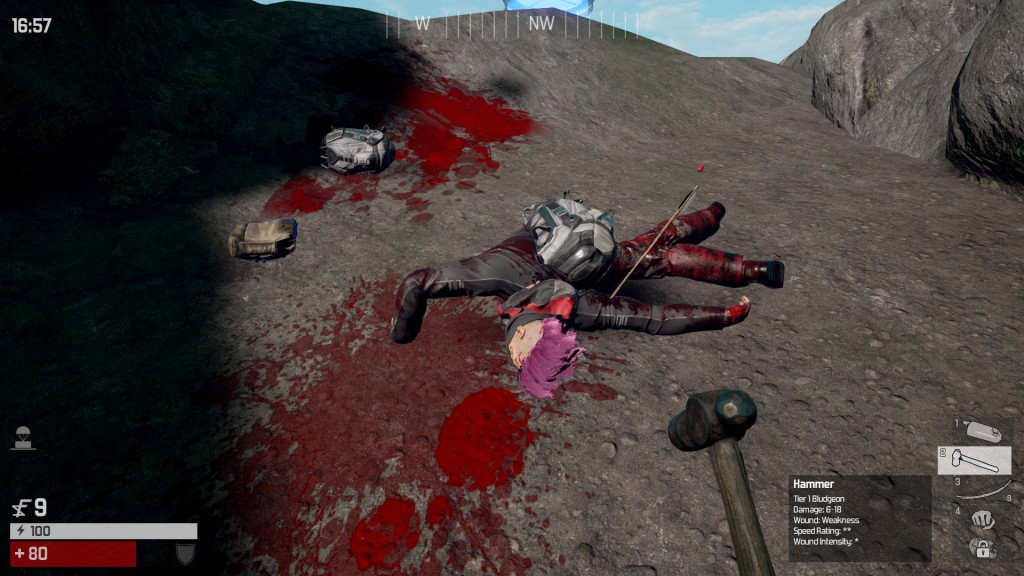 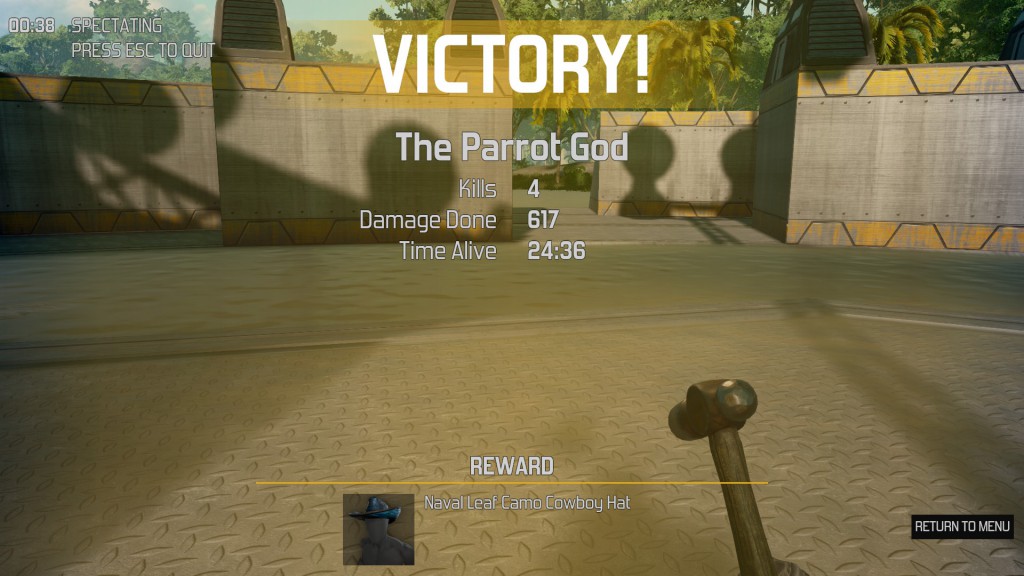 So What Are You Waiting For?

I mean, I know that my articles are pretty awesome (lol) but you really should stop reading this and go buy The Culling.

It’s on sale for less than $14 right now and I personally think that this game is easily worth more than $30, especially with the future developments that are already taking place. I’m super pumped for more maps, more customization and weapons!

So, are you going to be picking up The Culling?

Or have you already been played it and you’re just as excited about the future for it as I am?