Hello everyone, so you might be wondering… what are some good PC games to buy? I have played plenty and I would like to share which ones gave me the best PC gaming experience! I have been a PC gamer since 2011 and to me a great PC game should be a well optimized game with a unique twist to game play. By being well optimized, I mean that the developers took their time to make sure their game was a good game to run on a PC.

This list is in no certain order, these 5 PC games will give you an equally awesome gaming experience! At least in my opinion. 🙂 This list will most likely be updated to next gen once some more cool games get released! 🙂

So let’s get started with the list of AWESOME PC games!

Chivalry: Medieval Warfare is a multiplayer battlefield that takes place back in the times of swords, shields, bows and arrows. Many players call this game the Call of Duty of the medieval times! You go head to head with other players online and your life depends on which way you swing your sword and how well your timing is for countering your opponents moves. 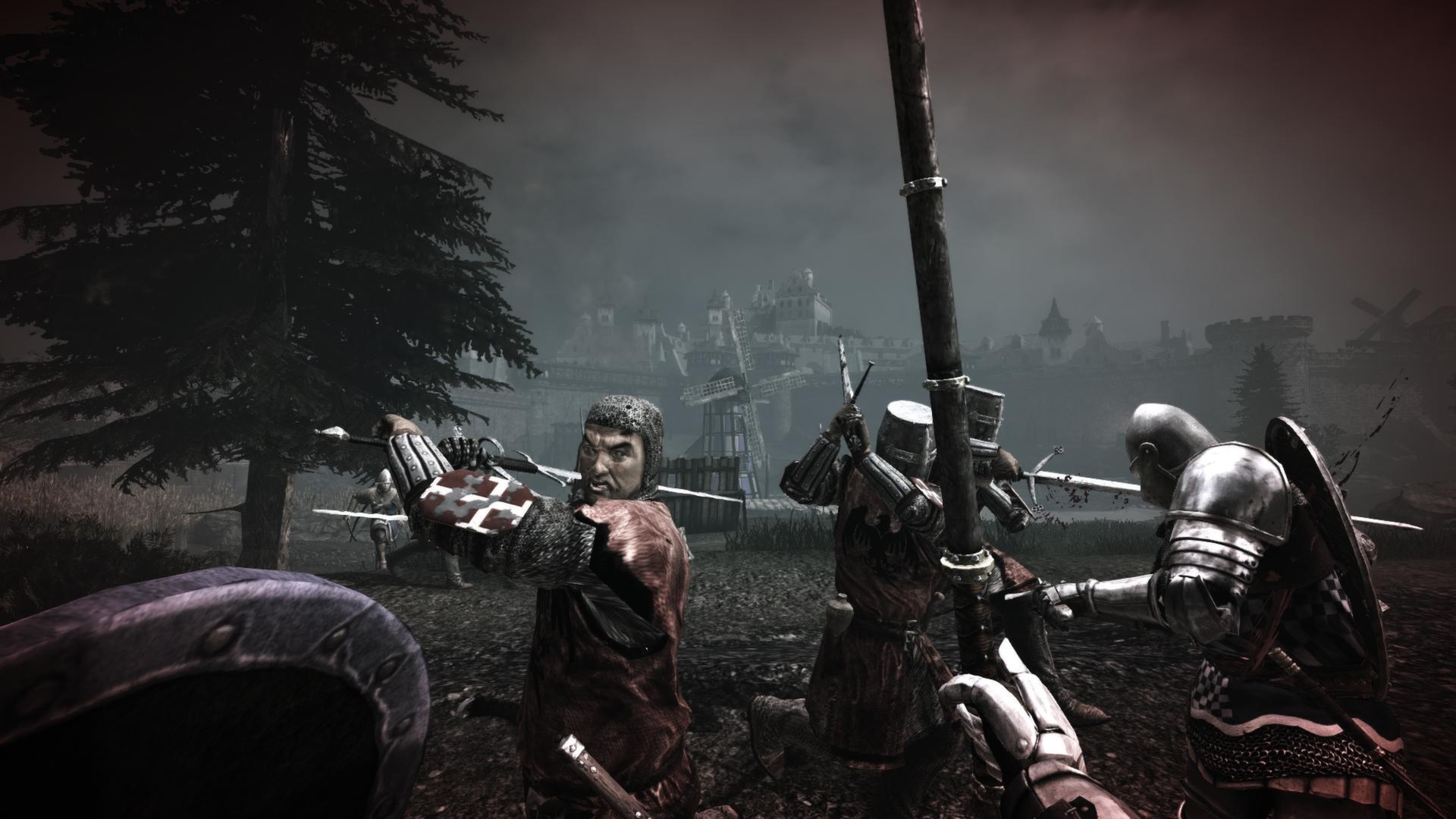 In Chivalry: Medieval Warfare, the player with the most skill wins.

Chivalry: Medieval Warfare has 4 classes to choose from. You’ve got the Archer, the Man-At-Arms, the Vanguard, and the Knight. The Archer can be equipped with different types of ranged weapons including bows, crossbows and javelins. The Man-At-Arms is a lightweight melee class that can also throw fire bombs. The Vanguard focuses on being a medium all-around class specializing mainly in two-handed weapons such as spears and halberds. The Knight is a heavy-weight melee class that has a lot of health, but the Knights move slower than the other classes.

There is a variety of different ways to battle your enemies. There’s also an arsenal of weapons for you to use against them! Choose wisely…

If you’re looking for any sort of a progressive multiplayer PC game to get hooked on, then you should try Chivalry: Medieval Warfare. They also have a DLC called Deadliest Warrior where you get to play as samurais, vikings, ninjas, pirates and more! It’s based of off the once popular TV show, and it’s a LOT of fun! 😀

Middle-Earth: Shadow of Mordor is a very unique game. It is very well optimized for PC gming and includes features never before seen in the video game world.

Shadow of Mordor is a great open-world action game. You play as Talion, a black water gate guard. His story for the game starts with his wife and son being murdered by someone that goes by the name of Sauron, and right before Talion is killed an ancient curse spells upon him. The curse makes him immortal and Talion forever has a soul inside of him known as the Ranger. The curse that induces the Ranger makes Talion immortal as well. (The “Ranger” has a name, but giving that name would spoil a huge moment in the game! 🙂 )

Using the Ranger’s help you go on a quest to find your family’s killer to avenge your family and get rid of your curse. As you work your way up through your nemesis’s war chiefs you level Talion up and gain more skills and abilities.

To be honest, this game doesn’t really flow well with the story line and the story is bland in my opinion. I love good stories in PC games but this game looks amazing and the game-play itself is why it made my top 5 list. The fact that they have an awesome fighting system to be used in a vast open world is pretty awesome.

The coolest feature to Shadow of Mordor is the nemesis system (pictured below). The nemesis system shows the relationships between all of your enemies. For example, you can see that a certain war chief has a captain guard that you received intel about. You could take him out or have him join your forces to help you take care of the war chief.

There are plenty of kill moves while fighting Sauron’s army of Uruks.

The unique nemesis system makes this game one of the best!

The nemesis system also shows all of the strengths and weaknesses of each enemy, given if you obtained the intel from a different Uruk.

Personally, I have probably defeated over a thousand Uruks but I still see different variations of finishing moves. Plus there are still skills and runes that I have to find to make Talion even more powerful! 🙂

Middle-Earth: Shadow of Mordor will keep you busy for hours. The main story line alone takes about 30+ hours to beat then there are many more hours of side quests and leveling up to do as well! 😀 I highly recommend this game!

The Elder Scrolls V: Skyrim is one of my all time favorite games for PC. If you’ve never played Skyrim then this should be the first game you grab for your PC! 🙂 The main story quests take about 20-30 hours to complete, then there is 150+ hours of miscellaneous quests to complete. Also, you’re going to be spending many more hours just exploring the open lands of Skyrim to loot dungeons and kill dragons.

You play as the Dovahkiin, which means The Last Dragonborn in dragon language. A “Dragonborn” is a rare individual who has been born with the blood and soul of a dragon, but the individual keeps the body of a mortal. One who is born as a Dragonborn learns and speaks the ancient dragon powers known as Thu’um.

Skyrim’s game world has been calculated to be 14.8 sq miles. That’s more than enough game world space to explore for literally days. There’s a total of 343 locations on the map of Skyrim, but there’s 363 if you add in the downloadable content for the game. Now for us PC gamers, we can add 100’s more the the help of the modding community. 😉

Through Steam’s Workshop for Skyrim alone, there are over 27,000 modifications that were made by users to enhance your Skyrim experience. There are also more mods on a website called Skyrim Nexus, give it a Google search if you’d like to check those out!

I highly recommend grabbing this game through Steam’s services simply because of the Workshop. One click and you’re done, your mod is installed. 🙂 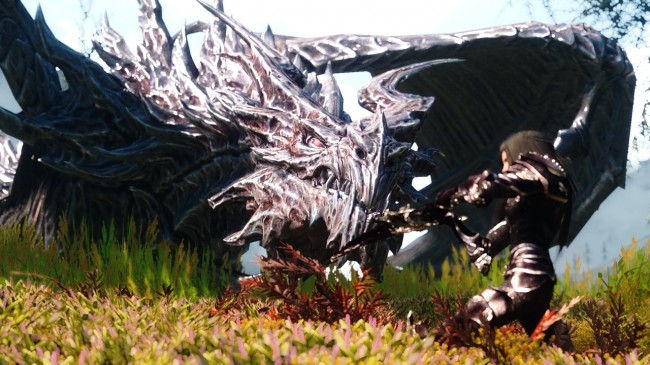 There are TONS of EPIC adventures in Skyrim that aren’t scripted. Hours and hours of non-stop gameplay! 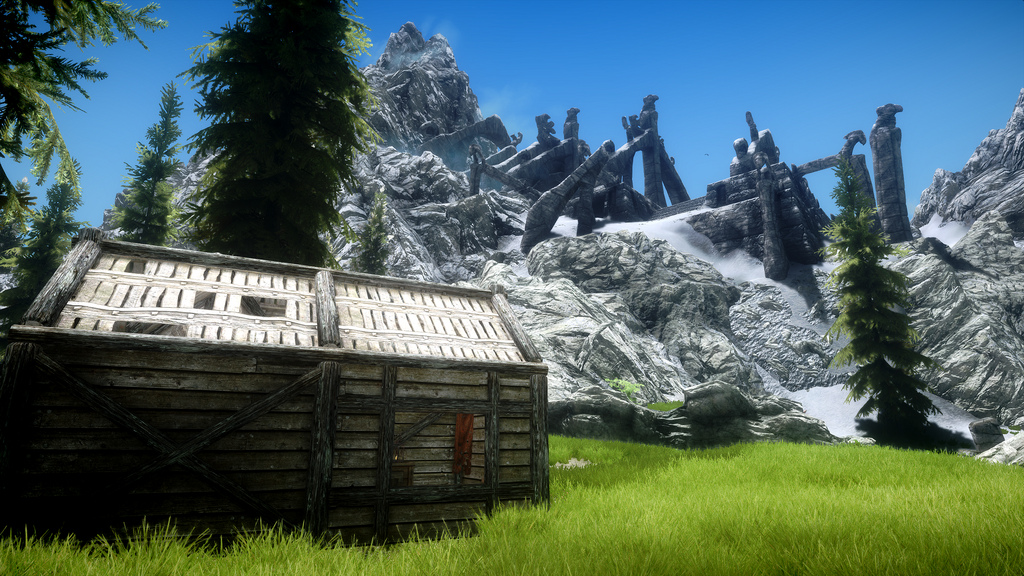 If you’re a present day PC gamer or if you’re about to join the PC gaming community, then Skyrim needs to be in your library of games. This game will always be remembered as one of the most epic games in the history of PC gaming.

This is one PC game you just cannot dismiss. The graphics are amazing, the game-play is fun and you can play with your friends cooperatively. Oh, and it’s also FREE-TO-PLAY. 😀

In Warframe you fight enemy forces with your team-mates. Your team can consist of your friends or random online players that you can connect with. You play the game in 3rd person view and there is an abundant amount of free running involved! The speed of everything in this game makes it a top action packed shooter.

You play as something called a Tenno. The Tenno are descendants of an ancient and mystical civilization of lost fighters from the Orokin era on Earth. Preserved in cryopods for hundreds of years, the Tenno are now awoken to a new war, quarreling and resisting conflicting factions as the sole bearers of the Orokin-created Warframes. Warframes are super powered battle suits that the Tenno wear during battle and you can customize your Warframe and upgrade it how you see fit. 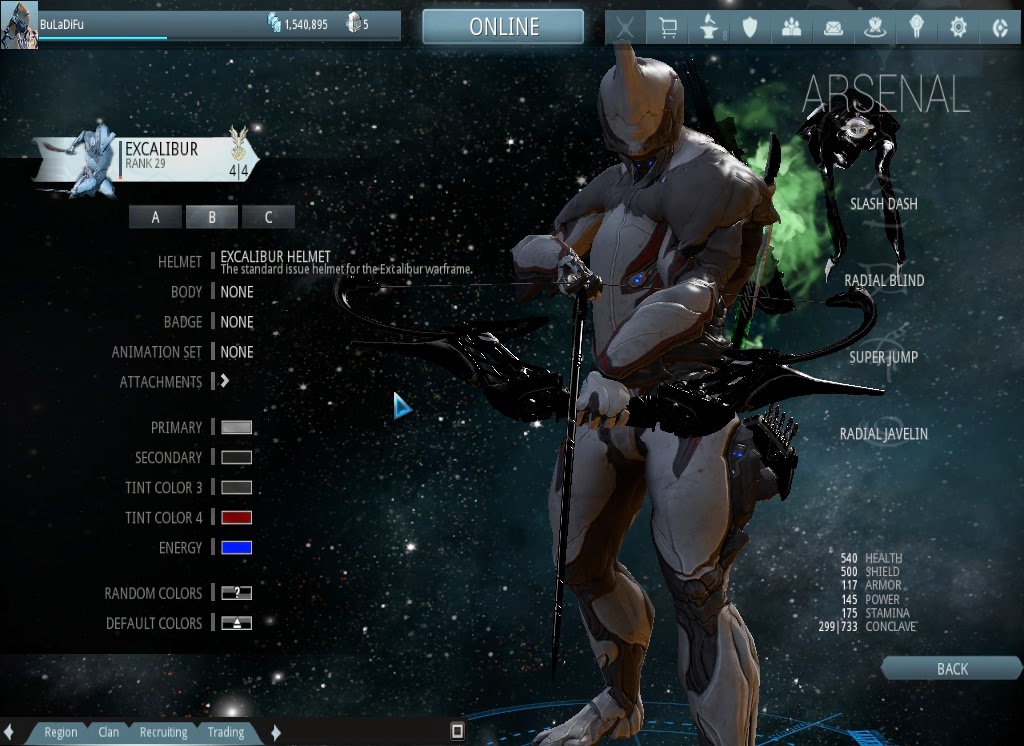 Fully customize your Warframe for optimal settings when you get into conflict with enemies.

As one of the Tenno you need to travel to different planets and defeat the leaders that are creating chaos to the universe. Gather your fellow companions and enter epic battles of abundant proportions. There are different scenarios that happen at each planet and as you travel to different planets and level up your Tenno you will be able to scale up to the big dog baddies of the universe. It’s up to you and your team-mates to dominate the threats and save all of universal mankind. 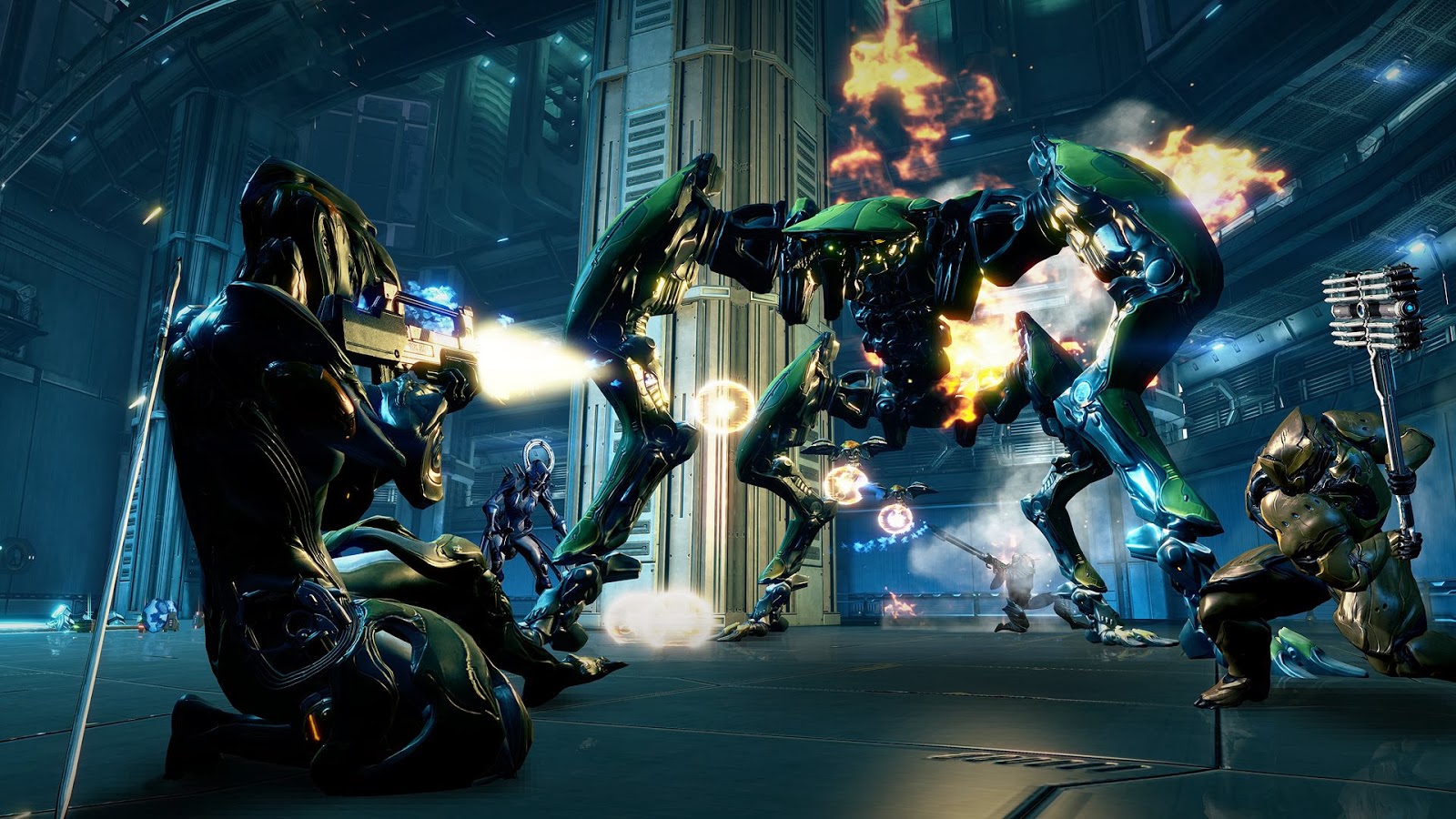 You better gear up before taking on the boss battles.

Warframe is a great game and should most definitely have a spot on your hard-drive! It is very well optimized and the co-op experience is what makes this game a must play!

Far Cry 3 is one of the best open world 1st person shooter gaming experiences that a gamer could have. The story is very well written and the characters involved are extremely developed throughout the Far Cry story.

You play as a young lad named Jason Brody. You and your friends decided to take a vacation to the tropical Rook Islands to get away from the city life. Little do you know that there is slavery and wars going on right in the area that they landed in while sky diving!

After escaping being captured by Vaas, a mad killer that calls these islands home, you start to venture off and find your friends. While doing so you start to realize that you are a powerful warrior and you can stop all of the madness that is taking place on the Rook Islands.

It’s up to you to bring the peace back to the Rook Islands.

There are plenty of weapons and plenty of funny scenarios while you explore these beautiful islands. Want to glide through the air? Then grab the wing suit and take off whenever you feel like. Want to race cars and win cash? There are an abundant amount of racing missions available on the island as well. There is nothing stopping you from doing whatever it is that you want to do on the island!

Explore the island on foot, in a vehicle, on a boat or in the air. It’s your choice.

Oh, did I forget to mention that there is a PC modding community for this game as well? That’s right! 😀 You can enhance the Far Cry adventure even further with a few PC modifications.

If you love open world games and first person shooters, then you can’t dismiss Far Cry 3. It is one of my personal favorites!

The sequel – Far Cry 4 – just came out a few days ago…I’m actually currently playing it and I can tell you that it will definitely be on this list in the future. 😉

You asked what are some good PC games to buy and I went ahead and showed you my opinion on the best of the best!

What do you think of these games? Have you played them? Are you going to give them a try?