After pouring in over 24 hours into this adventure I feel like I’ve got a good grasp on how the game plays and overall what kind of experience it is. It isn’t a game for everyone but it’s also one of the most unique gaming experiences I’ve had! 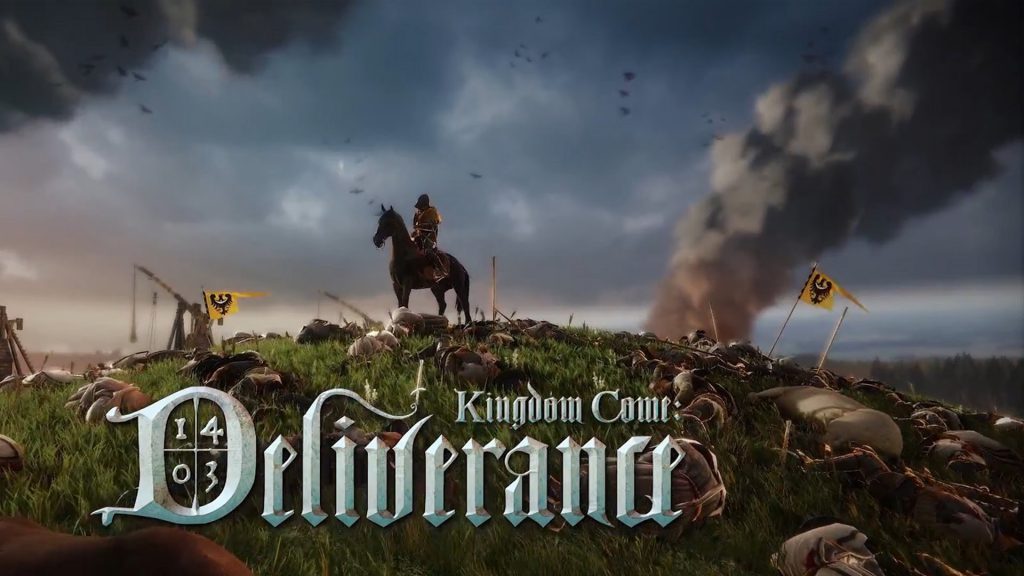 What Is Kingdom Come: Deliverance?

Kingdom Come: Deliverance takes place in the year 1403. You play as Henry, a peasant son of a very skilled blacksmith who happens to forge weaponry for nobleman in the Kingdom of Bohemia.

I want to do my best to avoid giving spoilers away but it helps to talk about how the game starts off. You start off doing random errands for your mother and father which will give you a run down of the basics including trading, combat, speech and more. During this tutorial you will get back story on Henry, his parents and other key characters. 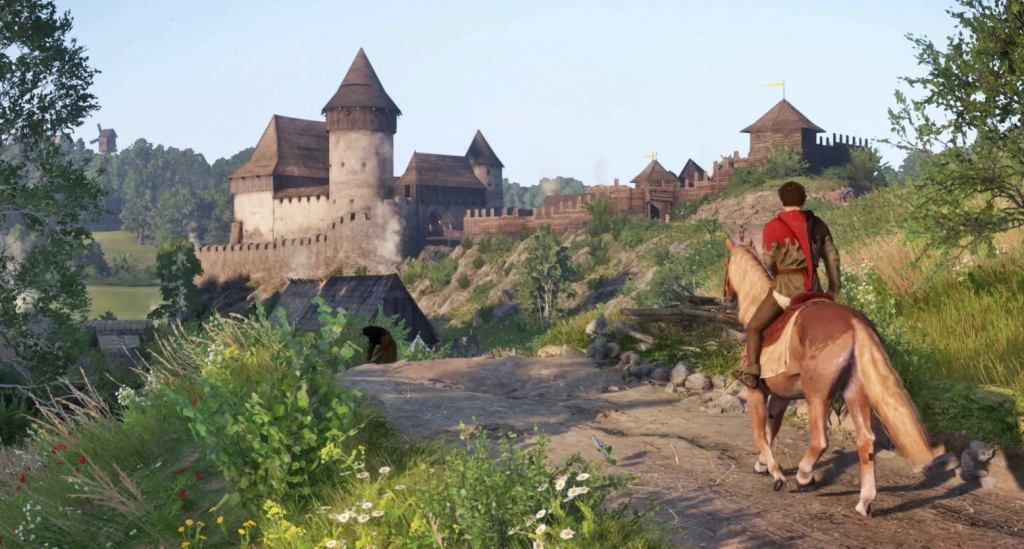 It doesn’t hold your hand here and there are a ton of ways to proceed to the next parts of the game.

Some people decide to only use speech to persuade which completes the errands for Henry’s parents. Others, like myself, decide to beat someone to a pulp that doesn’t give what they need.

I appreciate how the game doesn’t just hold your hand and give you complete, step-by-step instructions.

This is true for the rest of the quests as well, it’s up to you to decide how to proceed with most encounters.

After completing the errands for your parents, certain events unfold which forces you to leave in a hurry to another small town which gives you opportunities to explore more and learn more about the game.

When you come across something new to do such as training a skill or new portions of combat then it will pause and give you details on how it all works. This is needed, especially with a skill such as alchemy since it’s pretty confusing at first.

As you explore, complete quests and continue on your adventure you’ll level up your skills. There are combat skills as well as random every-day skills. For example, you can level up your drinking skill to get better at holding your alcohol down. Or you can get better at reading which will allow you to make sense of what’s inside of a book.

One thing that most people make an assumption about with Kingdom Come: Deliverance is that it is a total action-packed type of game.

This is the wrong assumption. If you’re looking for an action game then you might be a bit disappointed. Don’t get me wrong though, there are plenty of times where it is packed with action. You’ll be fighting bandits, barbarians and other enemy types as you move along with the game.

Kingdom Come: Deliverance was made as a story-driven game. There is a deep story with Henry which only gets deeper as you venture more through Bohemia. This is the main focus.

But, so far anyway, it doesn’t change the core of who Henry is which makes sense in the story. You’ll be doing a lot of investigating through the main quest line. Again, I don’t want to spoil anything but how the story unfolds… It makes total sense why he’d be an investigator for the most part.

You’ll be questioning people to figure out how and why certain events took place. You’ll be reporting to others with what you found out which will dictate what happens next.

However, this doesn’t mean that it’s a linear story. Every decision you make will drastically change how things unfold. Think butterfly effect here… there are an insane amount of ways to go about completing each quest and it’ll change the overall outcome.

Maybe you persuade that bandit to tell you who he works for. Maybe you tell him that you’ll beat his ass if he doesn’t tell you anything. Maybe you kill him right away and loot his body for clues.

It’s up to you how you go about it which is what I love most about this game. It doesn’t hold your hand and there is no right or wrong way to finish a quest.

You’re never stuck doing the main quest line either. You can explore all of the towns and forests all you want. You’ll find treasure, random enemies to loot and random encounters as you explore.

There is fast travel, but it’s not like how most RPG games do it. When you fast travel, time will pass by and you’ll be getting random encounters as you travel.

You also need to remember to eat and sleep while doing all of this. You can die of starvation or you can pass out after not having enough sleep… or if you drink so much that you drink yourself into oblivion.

As you do everything you’ll be leveling up your skills. This includes combat, day-to-day skills and stats. You can get better at being a swordsman, or maybe you’ll want to master using an axe in combat.

There are plenty of perks to get as you level up these skills. How you build your character is up to you which will help or hinder you as you continue on.

The skills are very diverse in this. From drinking skills to how well you swing your sword, you can build Henry however you want to.

If you get better at drinking then you can drink more without getting plastered drunk right away. Drinking will help you with conversation, but the hangover will hinder you in the morning.

If you get better at sneaking then you’ll be able to be a better thief, unlocking locked chests or even pickpocketing people for their gold.

Each skill has perks which you spend a perk point to get. You gain perk points simply by leveling up, there is an overall main level as well. 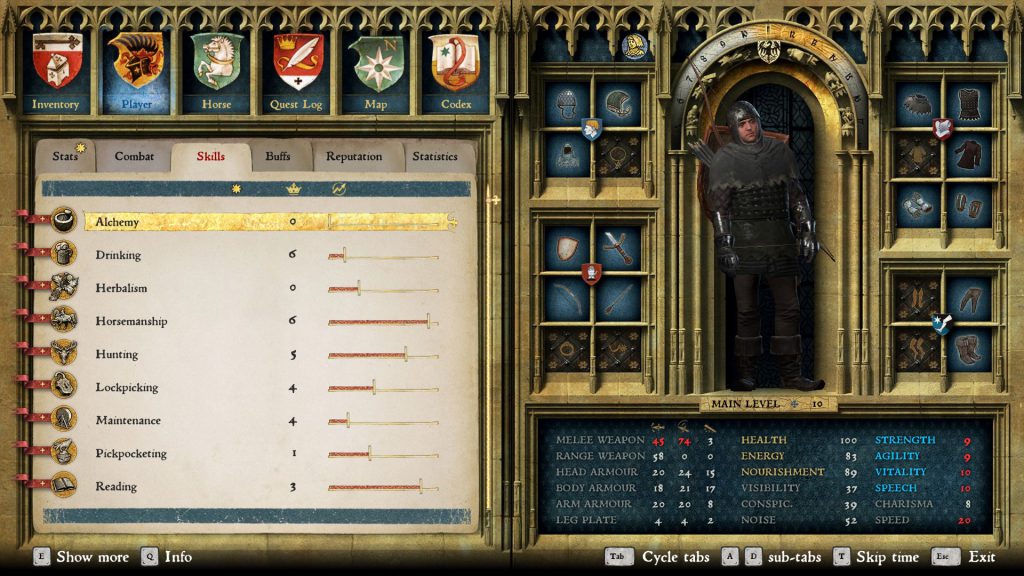 For example, there is a perk for horsemanship where you can ride 20% faster but you’ll also use the horse’s stamina 20% faster.

Or you can get a drinking perk that allows you to reap the benefits of drinking beer without getting too drunk, but wine will get you drunk a lot faster.

There are also perks for combat which unlock certain combos. Executing these combos is essential in fights

Combat in Kingdom Come: Deliverance is no joke, the developers wanted the combat to resemble actual fighting techniques. I see it as a combination of how combat is in Chivalry: Medieval Warfare and For Honor. You need to aim for the right parts of your enemy while also watching your stamina. Block when necessary and strike when the opportunity is there.

Combat is definitely not easy here.

You can’t just swing your sword as much as you can to kill someone, you need to think about your next strike and if it puts you in position for a good combo or not.

I’ve died quite a few times in combat, it’s hard to get down! But with enough practice and patience, it can be mastered.

There are ways to force your opponent into a position, or you can focus on your agility and dodge attacks until the moment to strike is there. Or you can do a combination of both.

As you level up, you’ll be changing what Henry does in combat and how he looks. This is where customization comes in. With all of the customization options, every play through can be very unique.

Leveling up these skills will allow you to gain perks, granted that you have the right level and a perk point to get it. You can build Henry however you like and there are plenty of clothing/armor options to customize how he looks.

This is another important part of the game, your looks will affect how people see you. If you have a lot of plate armor and it’s shiny, you’ll be seen as a noble knight and you’ll be treated as such.

Do you have blood all over your clothes? You will look extra intimidating and people will react differently because of that.

How you look will help you with certain situations. If you need to be intimidating then having blood on your clothes helps. If you need to persuade someone of nobility then it’ll help to look the part.

There are a bunch of different clothing/armor options and just like how it was back in 1403, there are several layers of armor to put on as well.

All armor has stats for protection, charisma, how visible you are and how much noise you make. If you’re wearing heavy plate armor then you will have a lot of protection, but you’ll move at a slower pace.

If you are dressed in noble clothing, people will look up to you more. If your clothing is bright, you’ll be more visible. If you are wearing dark clothing, you’ll be able to sneak around better. What your wearing will also affect how loud you are while sneaking around.

You can change how you look and your stats affect how effective you are in different situations. These options are so diverse that every play through would be entirely different.

The answer to that depends on who you ask.

For me, I love games that cater more to the story rather than the action which is exactly what the focus is with Kingdom Come: Deliverance. I’m getting that same feeling I got when I was first discovering the worlds of Elder Scrolls titles such as Oblivion.

Right now there are quite a few bugs going on but it’s nothing that is entirely game-breaking. Most of them are actually pretty funny!

At times I’ve gotten stuck in a bush and had to load an older save file, that can be annoying. Or how at times you can break a quest by fast traveling when you’re not supposed to…

I’m sure these bugs will get ironed out in the next few months and honestly, they aren’t so bad to the point where the game isn’t playable. I’d recommend getting it if you’re wanting to dive into a medieval story where your decisions really do matter.

So, what do you like most about Kingdom Come: Deliverance?

Are you going to be getting it?