It’s time to review Xotic PC to see if their custom PCs are actually worth getting. Let’s look at the hardware piece by piece and see if the value is there.

For the first part of reviewing Xotic PC (xoticpc.com) I’d like to see if it’s worth spending $1,000 to get a PC configuration done.

I decided to look at the G4 Triton since it’s priced right at the $1,000 mark. Most people looking to have a high-end system will be looking to spend this much or a bit more to get the highest quality gaming experience possible.

After clicking the desktop it takes a while to get into the actual hardware behind it. Xotic focuses on hyping up the desktop a lot before check out which I suppose that’s what a sales page is meant to do. Oh well, might as well read up on what Xotic has to say about it.

The page explains how this PC is VR ready, is easily upgradeable and has awesome liquid cooling. Sounds like a good deal, right?

We can only know after taking a look at all of the hardware that’s really inside of it so let’s get down to it. 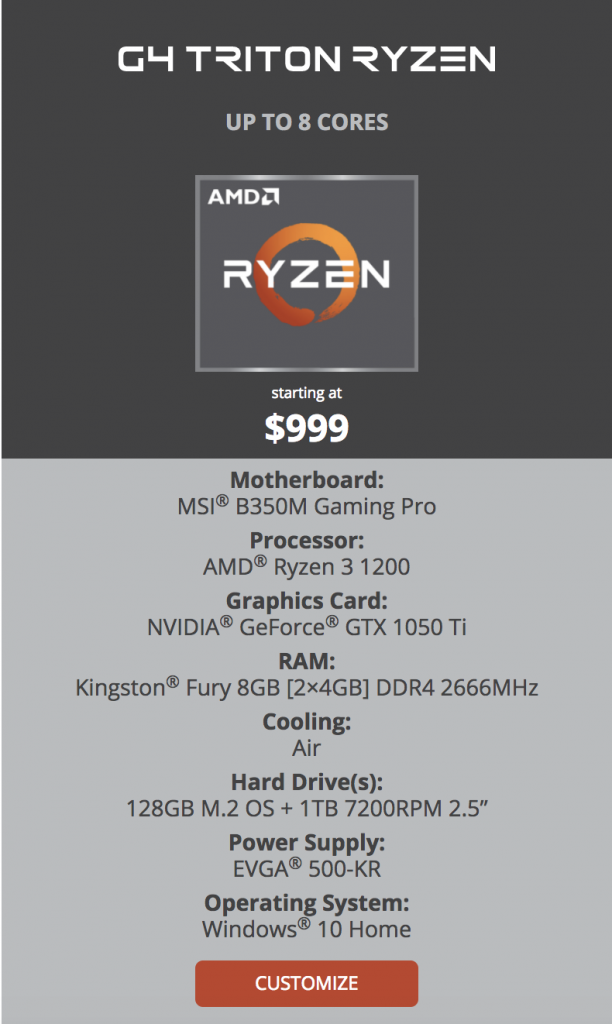 Reason is because you can literally do a build with similar specs for just a little over $500, completely built.

Where Is The Transparency?

Going through the process of buying the PC… I don’t feel any sense of transparency going on.

I figured maybe I could customize it a bit and see what else I can change around with it, see if making some changes would help with the pricing a bit or maybe the liquid cooling they talked about is top notch.

What’s also stated on the sales page is that the video card is “VR ready” and the PC is easily upgradeable. I can definitely see how the PC would be easily upgradeable, but that’s with any PC build really. Anyone can upgrade their PC with different parts.

Sure, I bet it could handle the lowest end games… But if you’re looking to play with 90+ FPS on bigger titles then you’re going to have a bad time.

I know this from trying to play with the Vive with the 970 as well as reading up on other people’s experiences. The 970 is stated as the minimum requirement for VR.

I just feel like Xotic is purposely knowing that their systems are overpriced or maybe they really don’t know what the power is actually like.

Do the math, Xotic is making roughly ~$400 profit off of this PC. That’s a ridiculous amount of profit, even with their warranty policy and employee payments being factored in.

Most pre-built PCs you find on other storefronts will make about $150-$250 profit from the build which, depending on the build, I can see where that is fair.

But for a build where the performance is exactly the same as what you’d get with a $500 build? You’ve got to be kidding…

That and at the end of customizing they have a spot where you can buy some games to go with the PC when it is delivered. The games they will sell with the PC is Battlefield 1 and Titanfall 2…

If you go on EA’s Origin store right now and look up both titles you’ll see that Battlefield 1 costs $40 and Titanfall 2 costs $20.

Xotic PC sells both of those games for $60 each…

I’m not a fan of how they are presenting this build… They show the liquid cooling inside where it says the desktop “starts at $999” but you have to upgrade to it and they are also trying to sell games for way more than what the official store sells them for.

I’ve never seen a custom PC website that costs so much while also selling accessories and games for so much more than what they’re worth… You can tell that this company is more so about the money rather than providing real value.

I don’t want to conclude my review saying they’re a complete rip-off without looking at the higher end as well. Maybe for some reason they have troubles with profits at the lower end so they have to be overpriced there.

There’s only one way to find out so let’s take a look at the GX13 Intruder – more specifically the one using an AMD Threadripper CPU.

The differences there would be the bigger case, some more USB slots and it actually has liquid cooling included. Though it’s not the same liquid cooler shown on the page…

But let’s take a look at the Threadripper configuration to see what it’s like. Let’s see if it’s worth $2,229.

Here’s what you get inside the GX13 Intruder Threadripper:

This is where I’m actually upset with what I see.

At this price point you should be able to game at 4K right out of the gate. Virtual reality gaming should run at a smooth 90+ frames per second at all times… This is one of the highest end price points for a PC yet a high end video card isn’t included.

Getting this build as is would result in you still not being able to game at 4K, I wouldn’t even want to try VR gaming with a GTX 1050 Ti since the experience wouldn’t be what it was made for anyway.

I’d also like to mention that this PC is marketed as a “gaming” PC yet they want to use the Threadripper as the CPU. Yes, the Threadripper is a great processor and it’d do fine in gaming but it’s not marketed from AMD as a gaming processor.

If you wanted a workstation PC then I could see why you’d use a GTX 1050 Ti along with the Threadripper since most rendering wouldn’t utilize the graphics card as much so you could save money there. If that’s your plan, please do a build of your own and save yourself a ton of money.

Seriously, I’ve looked over plenty of companies that provide pre-built PCs and I don’t think any of them are as much of a rip-off as Xotic PC is. I’ve always preached that, for the most part, you should never buy a pre-built gaming PC and these types of configurations proves my point.

Even looking at these configurations in a way where the video card is meant to be changed during the customization phase you’re still getting ripped off big time.

All in all, I’m not a fan of Xotic PC. Even with their 2 year warranty and the policy where you can send you PC in to get an upgrade whenever… The support the provide in general still doesn’t justify the crazy prices they are charging.

I like a company that is transparent, especially when it comes to a company that wants to sell gaming PCs. Going through these sales pages I simply felt like I wasn’t being told/shown exactly what I was getting into.

Another thing, I looked into the shipping costs and even with the $1,000 PC there was still a $70+ charge on shipping. I understand how heavier products take more money to be shipped but it’s just another expensive cost added onto everything else…

I highly suggest looking into doing a build of your own, take a look at a $500 build guide to start off and go from there. You’ll save yourself a lot more money and you’ll get the actual performance that you deserve for how much your spending.

This marks the end of the Xotic PC review, what do you think?

Do you think the builds are overpriced?

Or do you see the value in the support you get from the company?

20 thoughts on “Xotic PC Review, Are These PCs Overpriced & Under Built?”