Are you looking at a pre built gaming PC that is relatively cheap, one that is looking nice? You need to understand what’s really under the hood with these PCs.

There are so many computer companies out there that try to boast how awesome their hardware is and how great it looks when the reality is that almost the exact opposite is true.

I’ve reviewed a few pre built gaming PCs lately and there is a trend of there being crappy hardware inside that doesn’t match the actual power and value that is to be expected when the PC arrives at your doorstep. Even most of the sites that give you a guide to build your own PC that they build for you don’t give you the most power per dollar spent. 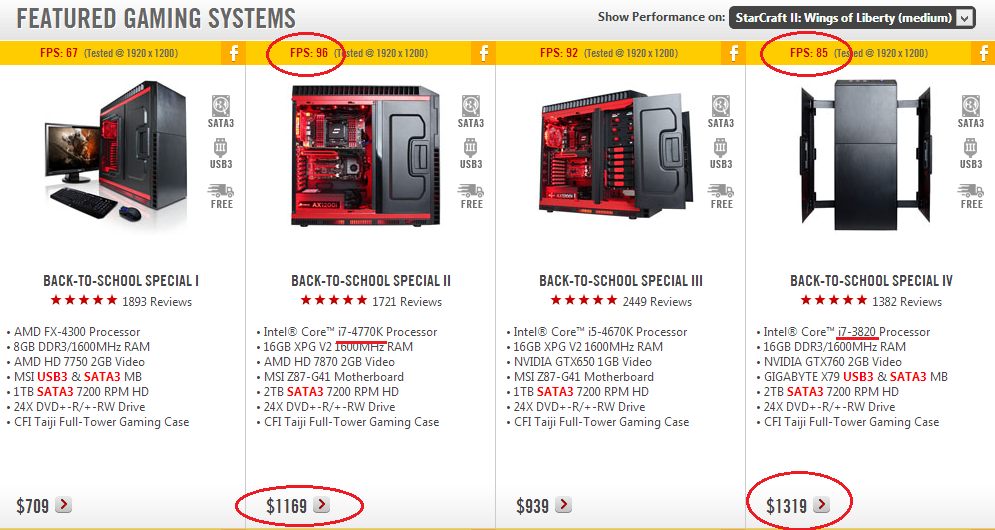 Big Companies Are Masking The Truth

Take a long look over of the prices and the specs of the PCs in the image above.

What do you see?

It literally costs MORE THAN the PC with the better CPU! The video cards aren’t too far off and there’s literally nothing else included that helps with gaming performance. It’s ridiculous.

Now take a look at the FPS setting example that they have above these builds. By paying more you get less FPS, by paying less you get more FPS?

Are these guys crazy?

In the real world, the more you pay the higher FPS you’re going to get because of the parts that you’re able to get inside of the PC. It doesn’t work the other way around, that’s absolutely insane!

This is why I will preach all day every day to anyone even remotely interested in getting into the realm of PC gaming to take the time to learn how to actually put one together themselves.

By building your own, you could use a FX-8350 and still be under the $700 range by also using a BETTER video card. Much better.

Compare that PC to this $500 PC build that I have within the site here.

It uses a FX-6300 and a R9 270 2GB video card. The CPU is much better off than the 4300 and performance wise, the 270 definitely beats the 7750. You can’t just look at the video memory of a card, the overall architecture and technology inside is what you also need to take note of.

Go ahead and look up benchmarks of these cards, you’ll see how good a 270 really is, especially when compared to the 7750. 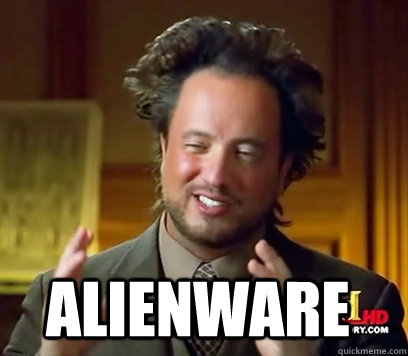 Are you guys seeing the point that I’m trying to make here?

These companies only see dollar signs above your head and they don’t really care about much else.

Sure, there are some companies that don’t screw the people too much. Some companies only have about a $200-$300 charge for them to build it but in 9.9/10 cases the parts are still not to the full value of what you pay for.

Alienware is very well known for this and although their new Alienware Steam Machines aren’t too bad, they just aren’t up to par with building your own.

I can totally see where some people could see it. By getting a pre-built or a Steam machine you’ll have Windows all installed, it usually comes with a keyboard and a mouse and it works right out of the box. Sometimes you’ll also get customer support.

That’s great but why buy a system that is going to be outdated in the next few years due to the low quality parts? It really isn’t that hard to build a computer, society has just made computer stuff look like it takes a genius but it just doesn’t.

Take a look at this page and see for yourself. Building a PC is basically plugging stuff into the right places. When I built my first PC, I had no clue on how I was going to do it. I only understood that PC gaming online is free and that mods were a thing. So after some simple research I was able to do it easily. Just followed step by step with that same video.

So guys, please don’t buy any kind of pre-built. You’re only going to waste money and have regret down the road because you aren’t going to be able to run some of the newest games with your “cool” looking PC.

All in all, pre-built PCs are a no go zone and building your own is how you’re going to get the most power per dollar that you spend.

That’s the truth. These companies only want your money, they really don’t care about much else.

Click Here For A Guide On Building Your Own $500 PC!

So, have you ever thought about getting a pre-built?

Do you now understand why you shouldn’t? Or are you still going to get one?