Today I’d like to write a review of the CyberPowerPC Gamer Ultra GUA4500A gaming desktop because it’s fairly new to the market and is promoted as VR ready.

I’ll be going into the details behind the hardware in this PC to see if it can really handle VR gaming. At this price point it had better have some pretty awesome hardware inside! 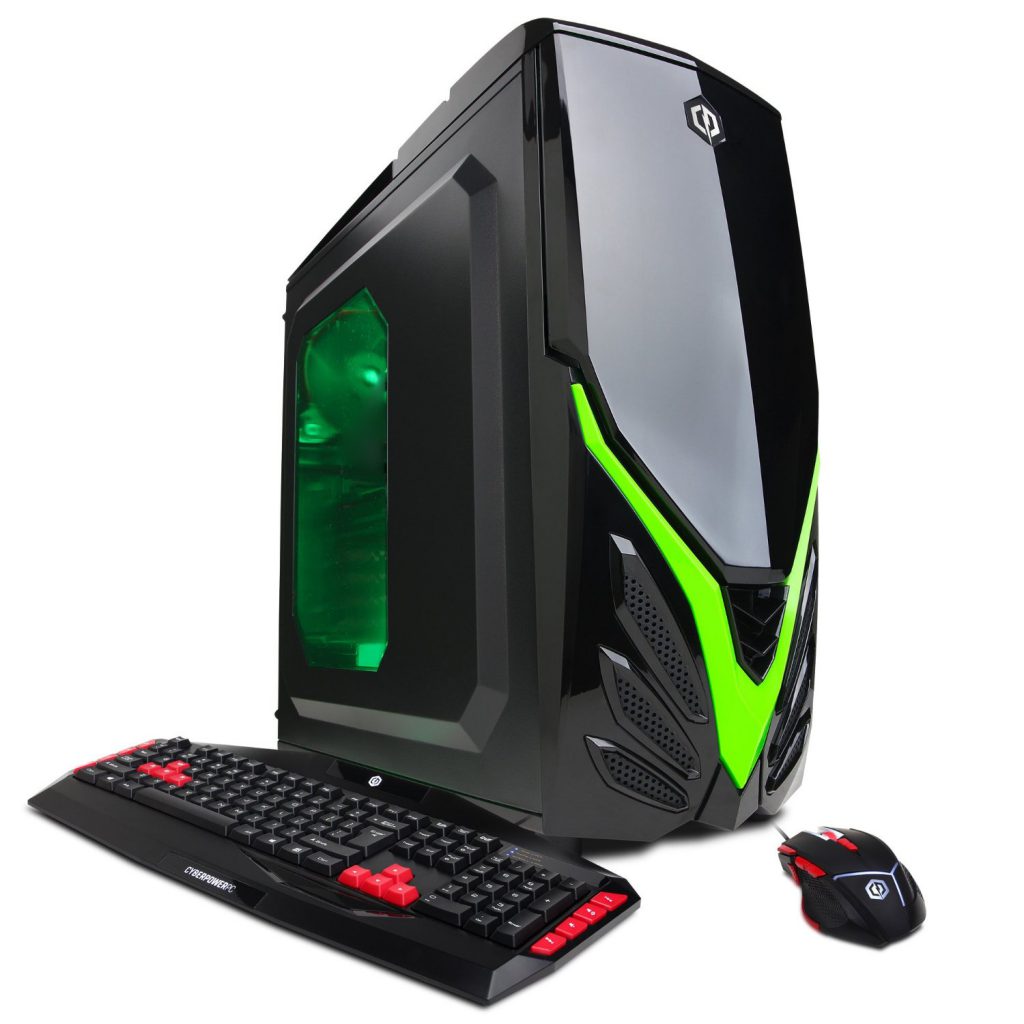 Is It Really “VR Ready”?

I wanted to point this out right away in this review – this pre-built computer is advertised/promoted as being ready to handle virtual reality gaming.

Before we determine if it actually is, you have to take a look at the recommend system requirements of VR – only then will you be able to tell if it can handle VR.

When it comes to VR, you need to have a consistent and high frame rate while you’re in-game. The above recommended specs is basically what you’d need to be able to achieve that.

Trust me, having high FPS in a VR game really is required. I have the HTC Vive and when I boost the graphics settings on some of  the more demanding titles the FPS goes down a bit and it really messes with my head. A high frame rate is needed in order to fully enjoy a VR experience.

Now that you understand that, let’s get into what is inside of this PC and if it’s enough to handle the VR gaming industry.

At least for CPU intensive games. As you saw above, the recommended processor for VR – on the AMD side – is the FX-8350.

This means that there is roughly a 40% loss of performance, having a FX-8350 would be the much better choice but that does not mean that VR gaming isn’t possible with the FX-6300.

I’ve read on the Vive subreddit that some people have been able to run most of the main titles such as Hover Junkers or Vanishing Realms with a FX-6300 as the CPU.

Problems only start to incur with CPU intensive games so if you try to start using VorpX or Revive for running AAA titles in VR you’ll have to turn down most of the graphics settings to get it to be playable.

All in all, yes, the FX-6300 will be enough for VR gaming. But in my opinion, it’s only going to be good for the entry-level VR gaming that we are seeing.

When it comes to the future of the VR scene there is going to need to be some good CPU power. The FX-6300 is a pretty good processor, don’t get me wrong, but I don’t think it’s going to be able to handle all of the future of VR gaming.

One thing that is extremely awesome about the FX-6300 is that it is unlocked meaning that if you were to install an aftermarket CPU cooler to the processor you’d be able to overclock it for further performance! This wouldn’t completely fix the issue with CPU intensive games but it would definitely increase the overall performance.

The exact card is the Zotac GeForce GTX 1060 Mini 6GB card. Being a mini card, some might think that it doesn’t carry the power in comparison to the other 1060s out there but trust me, Zotac’s versions packs a powerful punch. It does just fine.

All of the GTX 1060s have amazing raw performance. nVidia came out with the GTX 1060/1070/1080 fairly recently and when looking at the many tests that have been done on these cards it’s safe to say that they’re fully capable of the future of gaming as a whole.

When looking at VR, the GTX 1060 is going to do great. It basically has the power of a GTX 980 with 6GB of VRAM. That means that it’s going to be able to max out whatever at 1080p and it’ll be able to run VR smooth as butter.

I was actually slightly surprised to see this card matched with the FX-6300. I researched a bit on whether or not the GTX 1060 was going to bottleneck the FX-6300.

Turns out that it does… but only by a little bit. If you were to install an aftermarket CPU cooler that is compatible with the FX-6300 and that does a good job at really keeping the CPU cool then you’d be able to overclock it.

After a decent enough overclock you wouldn’t have to worry at all about bottlenecking issues. The FX-6300 can actually be overclocked quite a bit – it depends on which cooler you decided to go with and if you learn how to correctly overclock.

When it comes to learning how to overclock correctly, YouTube is going to be the best place to learn. There are massive amounts of different video tutorials there all about overclocking.

The Rest of The Specs

All of the other requirements that make a computer a computer – let’s go over the other parts that complete this PC.

For hard drive space it comes with a 120GB SSD and a 1TB HDD. This is actually pretty awesome – Windows 10 will come pre-installed on the SSD and if you know about what SSDs bring to the table you know that boot times and your most used programs installed on the SSD will run a lot faster. 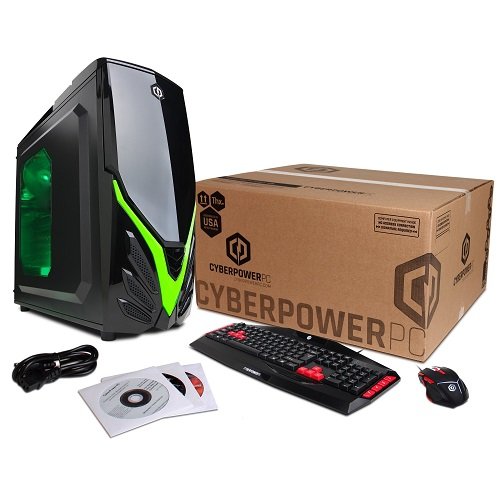 Having that extra 1TB of HDD space is perfect for storing a bunch of games. I have a post all about the differences between SSDs and HDDs – I suggest that you check it out if you want to learn more about the actual differences!

For memory it has 16GB of DDR3 RAM. In my opinion this is a bit overkill because 8GB is really the standard for today, I have 8GBs of RAM in my current build and it runs all of my games, VR or not, perfectly fine.

It’s inevitable that the industry will someday move forward where more RAM will be needed but I would have liked to see this PC have 8GB of RAM and the FX-8350 instead for further gaming performance. For some though, 16GB of RAM will be what they need if they do a lot of multi-tasking and rendering/graphics.

There are six USB 2.0 slots in total and it comes with a CyberPowerPC keyboard/mouse combo. It sucks to not see any USB 3.0 slots but to some that might not be an issue. If you’re using the Oculus Rift then you’re going to have problems – it requires two USB 3.0 slots.

That alone doesn’t make much sense to me… if you’re going to make a PC that is promoted as being ready for VR then don’t you think that it should meet the requirements of the major headsets that are out? Having no USB 3.0 slots means that it doesn’t meet some requirements for the Rift… however, the HTC Vive would be able to hook up just fine.

The keyboard/mouse combo is the standard CyberPowerPC combo that comes with almost all of their pre-built desktops. I would have liked to see a combo that matches the green on the computer but some of you might not care about that. Besides, you could always go for a different keyboard and mouse if it bothered you.

To sum up the rest of the specs, it also comes with a basic CD drive. There probably won’t be much use for it since Windows 10 comes pre-installed but I did see that it comes with some CDs, you may or may not have to install drivers from the CDs that it comes with.

So Is It Worth Getting?

Yes for those that are looking for an entry level pre-built PC that will be able to handle this first wave of VR gaming.

No because at this same price point you could build yourself a gaming PC that has a much better processor giving more potential for the far future of VR gaming.

It’s really up to you but this pre-built doesn’t stand a chance against a custom built PC with power per dollar spent in mind. I’ve seen pre-built PCs that are a lot worse, 9/10 times pre-built computers rip you off but this one at least delivers a decent bit of gaming performance for the money spent.

The reviews on Amazon don’t lie, this will be able to handle many games on higher settings, I just think of the future of the industry and the FX-6300 probably wasn’t the best pick here. 8GB of RAM and the FX-8350 would have been better to go with.

Again, if you were to build your own PC you’d have a lot more bang for your buck. Sure, you might have to spend just a bit more to include Windows 10 and a keyboard/mouse combo but in the end it’d definitely be worth the extra investment because you’d have an even better PC on your hands.

So, do you still plan on getting this pre-built?

Or would you rather build your own and get the most bang for your buck possible?

6 thoughts on “CyberPowerPC Gamer Ultra GUA4500A Gaming Desktop Review, Is It Worth Getting?”