When you’re gaming with friends you’re going to need a way to chat while in-game. Discord is easily the best VoIP service to use when you’re looking for something free!

Yup, you heard me right. Discord is free to use. You can make your own servers, invite your friends and voice chat with them at no extra cost.

The only thing someone would pay for in Discord is for cosmetics and they don’t even have anything released in that fashion – yet.

I’ve read on the Discord subreddit that the developers actually got all of the funding they needed from Silicon Valley so they aren’t worried about monetization quite yet since it’s not a big deal right now. They want to make an awesome product before they try to make money from it.

I respect that decision ten fold because in the gaming community/industry we are seeing way too many “money grabs” in comparison to the actual good experiences/services that could be had in the industry.

I think that it’s amazing that Discord allows people to have their own servers without paying a dime for them. I read that the way it works so that it doesn’t cost them so much to host these servers is that your server gets shut down when nobody is on it and online.

That has to cut server hosting costs down quite a bit and it’s a smart way to do so. It’s a text and voice chat service so plenty of background server work needs to be done.

They have a web-based app, an app to download on Windows 10/Mac and they also have mobile versions as well so you will basically always be able to connect to your server.

While playing different games and meeting other players I’ve found that many use Discord and all it takes is a simple link invite to get anyway in the server. A simple copy/paste and then you’re in.

Here are some differences between Discord and other similar apps: 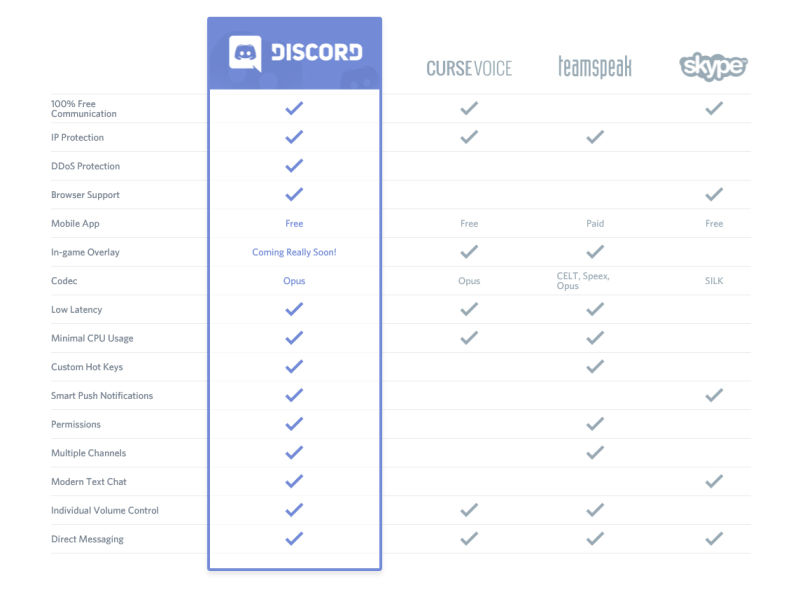 It’s amazing to me that the developers behind Discord were able to manage giving all of those services 100% for free.

When you look at the other guys, it’s a no-brainer to use Discord. Look, I’m not saying that it’s the most perfect app in the world – I can say that there is a bit of a noticeable difference in audio quality in comparison to TeamSpeak. I feel like TeamSpeak is a bit clearer.

But it’s nothing that makes a crazy, significant difference in my opinion. I’d much rather not pay anything for a server and besides, when you’re in-game you can hardly tell that there is a slight audio issue.

Also you should know that you can add in bots to the servers as well. I have no personal experience doing it but admins of other servers that I’m apart of were able to add music bots that play music for the whole server for example. There are different bots and features you can use within the app!

What Do You Prefer?

Honestly I find myself Discord, TeamSpeak and Skype – it all depends on who I’m playing with and what they’re used to using but I definitely dig Discord more than the other ones I use.

Discord uses hardly any bandwidth or data when being used and since it’s free, why not give it a shot?

Have you ever heard of or tried Discord before?

What do you use to chat with your friends while gaming?