It’s time to review the CybertronPC Borg-Q GM4213A desktop PC because it’s a sort of “trendy” PC for people looking to get into PC gaming but there isn’t much value given per dollar spent.

What do I mean by this?

The guts, or the hardware, inside of this specific PC really isn’t the best bang for your buck, and that’s what I’m all about. The only reason someone would really want to purchase this PC is so that they wouldn’t have to build their own, which is where the beauty of PC gaming lies. It’s really easy to build your own PC!

Many think that you have to be some super computer guru in order to build your own computer, but it’s seriously A LOT easier than what most would think, trust me. I would know first hand.

I knew absolutely nothing about building computers when I built my first gaming PC but I definitely don’t regret making the decision to.

You’re able to get the most value per dollar spent when you build your own gaming rig and that’s really the route that you should go, the route that I highly suggest is checking out the $500 gaming PC build that I have on this site. It is a MUCH more powerful PC than this pre-built one is, basically doubling the power in the hardware. Reason being because the guys over at CybertronPC are trying to make a bunch of profit so they over charge significantly on the parts within the PC itself.

Everything you’ll need on a $500 budget is included on the $500 PC build here and I can answer ANY and EVERY question that you may have as you go forward with it in the comments area!

But, for those of you that still want to get this PC, I get it.

You want to buy a gaming PC and have it work and turn on right away the moment you get it. The benefits behind building a pre-built is being able to upgrade your parts down the road, you won’t have to take a bit of time to build one yourself and the fact that you won’t have to buy any operating system as it will come with one when it gets shipped to you.

The only thing that you need to keep in mind, if you plan on upgrading down the road, is that you’ll be spending WAY more bucks than you would have by building your own in the first place. 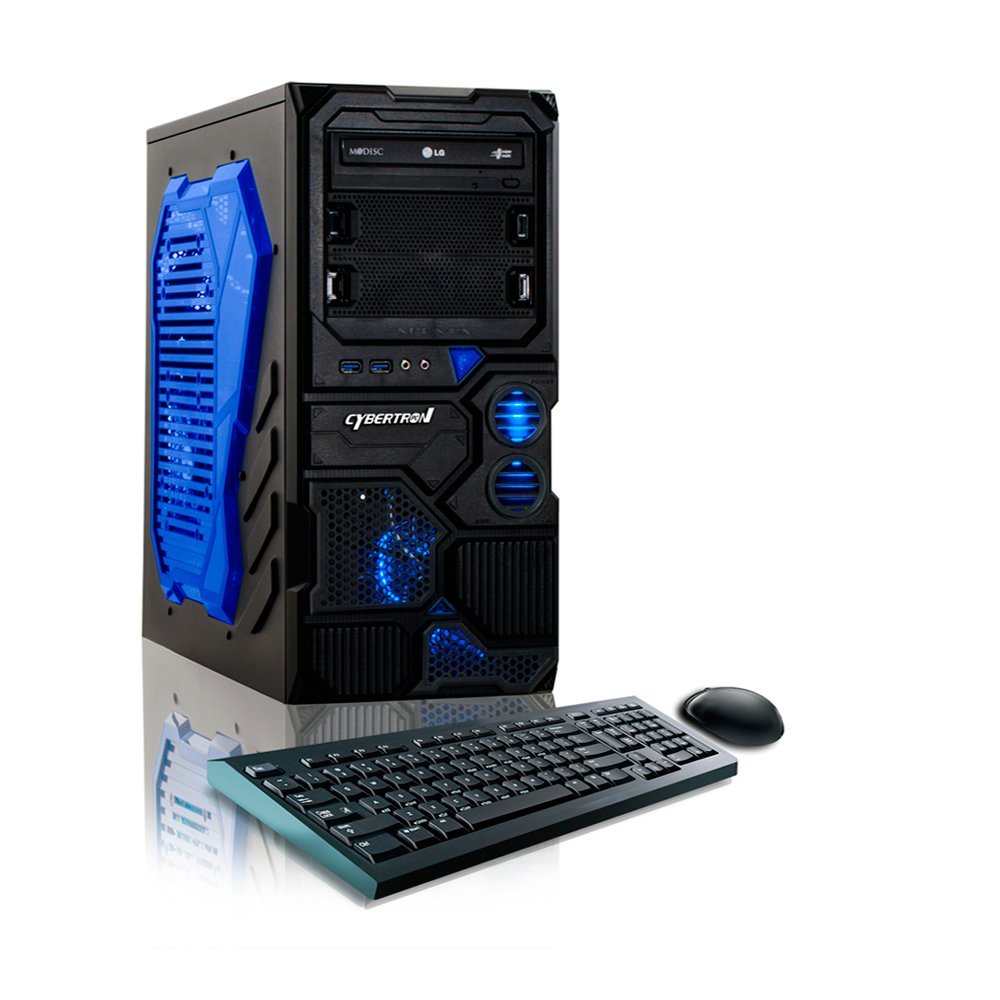 The Video Card Is The Worst Part

This PC has a NVIDIA GeForce GT610 1GB video card. It’s honestly a pretty horrible card, not nearly capable of running anything coming out in 2015 and beyond even on the lowest settings.

This is what upsets me most about these pre-built “gaming” PCs. These companies go out and advertise these types of PCs as top notch gaming rigs but in reality, the best game that it’ll run is World of Warcraft which is a game that was released more than 10 years ago.

What does that tell you about this PC?

Trust me on this, this video card is totally not anything near what you’re going to need as far as hardcore PC gaming goes.

As I said, it’ll be good for games that are 10 years old or if you are a super casual PC gamer but something tells me that if you are looking for a PC gaming rig, you’re not a casual gamer. The only cool part about this PC, as far as video cards go, is that you can upgrade to a more powerful GPU down the road, if you so choose.

Which again is why I recommend building your own because you’ll have an amazing gaming rig for each dollar that you spend towards it.

Click Here To Read Reviews On The Graphics Power

The Processor Could Be Way Better For This Budget

The $500 build on this site has almost double the power of the CPU that comes with this specific PC which is the FX-4130.

The FX-4130 can be an O.K. processor with some overclocking but this PC doesn’t come with the right kind of fan for overclocking potential.

As I said before, building your own PC with the same budget will not only end up being cheaper, it’ll also give you A LOT more power. Power is important for PC gaming especially given the fact that virtual reality and other super demanding PC games are right around the corner.

This PC isn’t going to survive 2015 at all with the parts that it currently has. The companies behind these PCs are essentially screwing you over, so please, do yourself a favor and build your own PC.

You’ll thank yourself later because the CPU is just as important as the other components when it comes to a gaming PC.

Everything Else Is Basically Good To Go

This PC comes with 1TB, or 1,000GB of HDD storage space and 8GB of RAM along with a keyboard and a mouse.

The keyboard is very basic, but you don’t really need any kind of special “gaming” keyboard in order to have the edge in PC gaming. A keyboard is mainly personal preference.

As far as the mouse, there isn’t much detail about it on the Amazon product page. Something tells me that it isn’t up to par and you’d be better off actually getting a real gaming mouse because that really does matter. The DPI settings goes with your accuracy in any game really. The mouse matter.

These specs are good to go and they are the standard demands, especially for this specific budget range. It also comes with a CD drive and a Windows OS, Windows 8.1, is pre-installed into the PC which is also a nice thing about this computer.

That’s one thing that many people look at as a burden when they go to build their own PC. They have to buy Windows.

Well, honestly, there are some free operating systems out there.

Take a look at Ubuntu for example, it’s a Linux based, free, open source operating system which you could use temporarily with a custom built PC until you could afford to throw Windows into it.

The only bad part about Ubuntu is that it is Linux based, and not every single PC game out there is made and compatible with what Ubuntu has to offer.

Games such as Skyrim aren’t compatible by traditional means, but there are ways to actually emulate certain games via Linux, but that’d be for your own research/a future post! 😛

All in all, this PC really isn’t giving you the most value per dollar spent.

The guys behind the building and selling of this PC are only looking for profit, a VERY similar PC could be built for around $300 to $400 at the most and this PC really isn’t worthy of giving any sort of good performance when it comes to PC gaming as a whole.

So, what do you guys think of this PC?

Are you going to be building your own instead?