Dungeonmans is the classic turn-based RPG game that makes fun of itself while still acknowledging that it’s a game, a good one at that!

It’s like some of the old school games such as Exile or Ultima but with modern graphics and a humorous twist to it. The stats, progression and overall challenge is actually pretty well-balanced and although it released a couple of years ago the developers are still adding updates to this day!

The main focus of this game is the fact that it mixes rogue-like elements into how a classic RPG plays. Any time you make a movement, the world also makes a movement with you.

You are free to move around as much as you’d like but you need to be strategic in some situations with monsters and what not otherwise you’ll get flanked and you’ll die. Get used to that, death is extremely inevitable in Dungeonmans.

When you die you have to create a new hero within your academy. What’s cool about that is that with each hero you can upgrade the starting gear at your academy as well as level it up for more goodies when you collect relics and books to bring back to your academy.

Every world that you generate is different meaning that there is no dungeon that is going to be exactly the same so you’ll have to traverse through the world to discover where the best loot, shops and end game monsters are at each time.

The more south-east you go the harder and harder the monsters get. You’ll need to defeat the bosses at different dungeons and what not to level up your hero to gain more ability points, skills and loot to increase your damage and armor.

You can choose to start out as a certain class giving you different starting gear for each one, you also get to pick a couple of perks that can help you long-term. There’s a perk that allows you to eat books for health, there’s also another one that gives you more loot while breaking objects in dungeons. 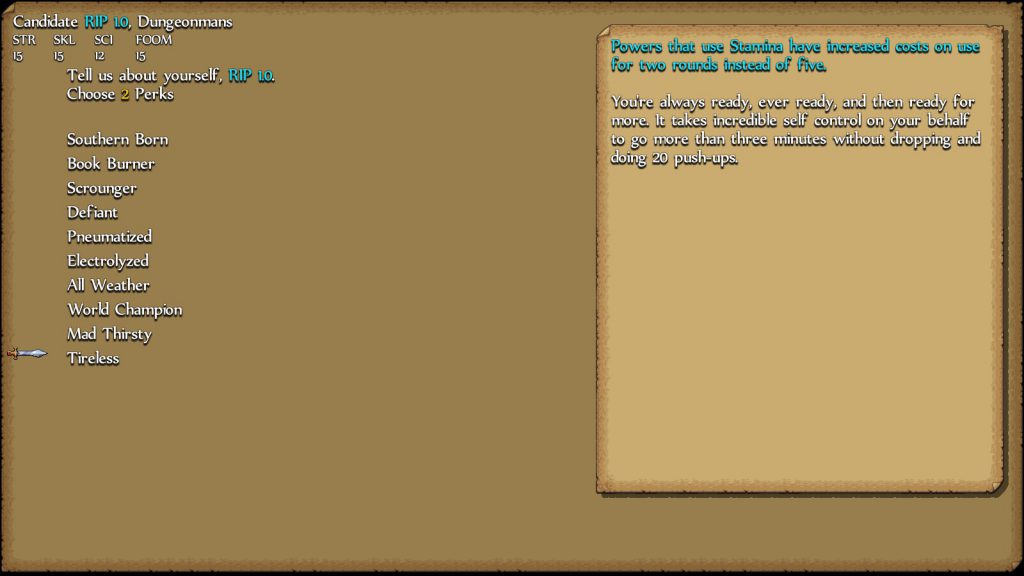 After reading the description of the Tireless perk you can get a pretty good idea of the humor behind the game. There are all sorts of puns and weird random remarks… it’s great!

I haven’t made it very far as of yet but that’s mainly due to me needing to upgrade my academy more to get better starting loot and to be able to upgrade starting points as well.

Mastery skills, setting up your build just right and having patience is really how the game is played. It’s challenging, but beating the game is definitely doable.

Loot, loot, loot. It’s all about the loot.

If you enjoy dungeon crawling and the type of turn-based gameplay that Dungeonmans takes inspiration from then odds are that you’ll appreciate it.

There’s something about entering into a new dungeon, getting to know how to beat new enemies and finding better loot… it’s extremely satisfying!

What I love most is that this game is a complete joke yet it’s still a good game as far as the overall mechanics and how it feels. Some DLC just came out today called “Pay2Lose” – it costs $5 and it literally only gives you the option to make enemies more often, make them harder and to negatively affect your hero as much as possible. 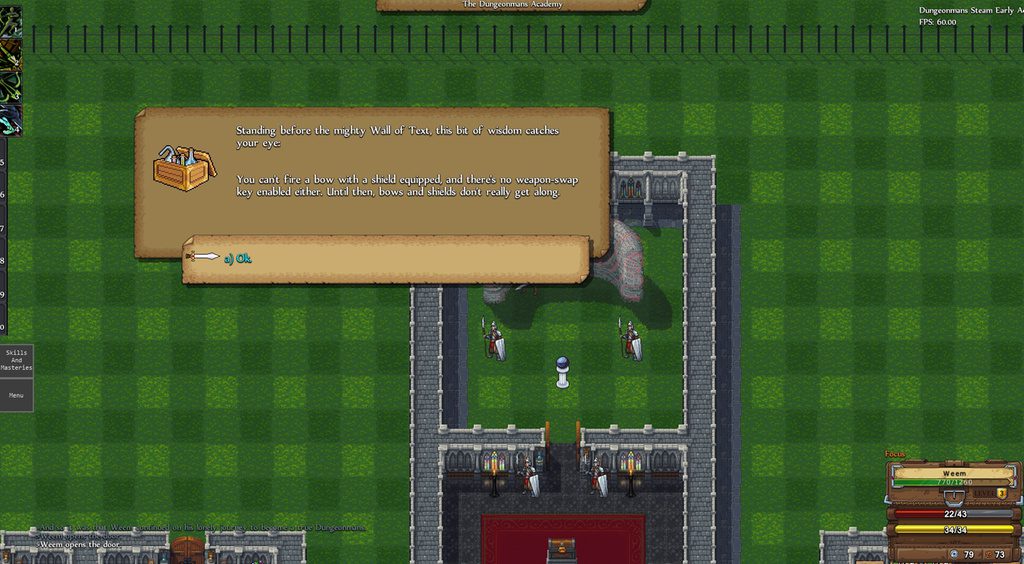 That alone should give you a clue that the game isn’t taken seriously, but it is. Honestly the mechanics are spot on and the RPG elements are exactly how a RPG fan would want them as far as leveling, combat and skill trees.

You can play it completely differently every single time. Want to be a 2-handed warrior that also specializes in summoning the undead? Go ahead. Want to be an archer that can also deal up-close damage while dual wielding?

Whatever type of Dungeonmans you want to create, you’ll be able to create it. Just don’t get too attached to a specific one because losing your hero and starting over is something that happens all the time.

Here are some screenshots of the game that I took on different adventures I had, I love the art style of this game! 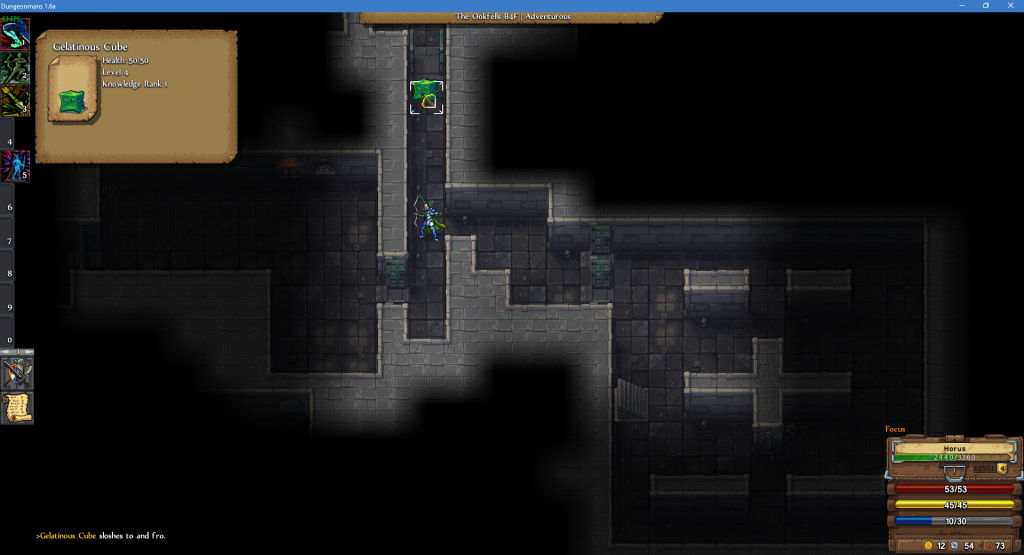 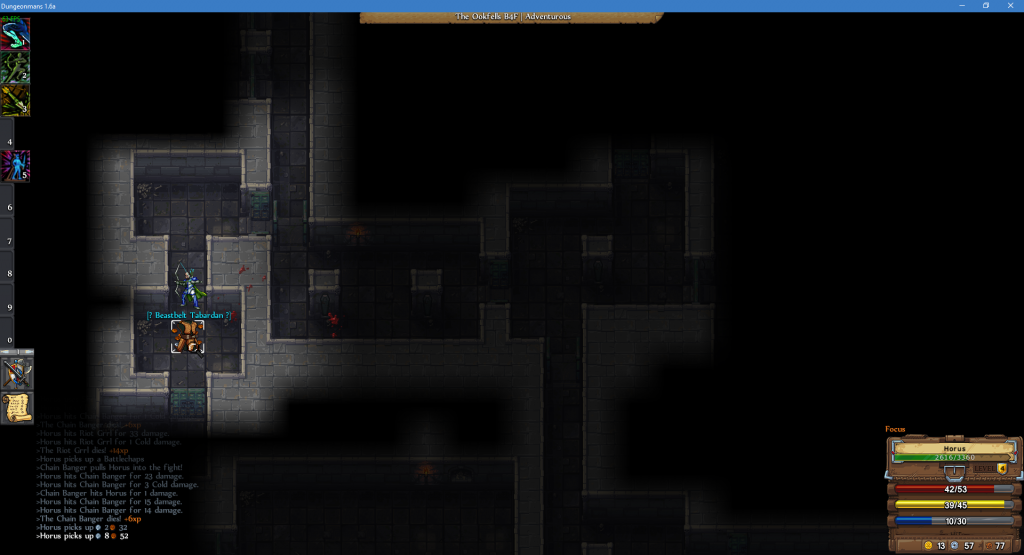 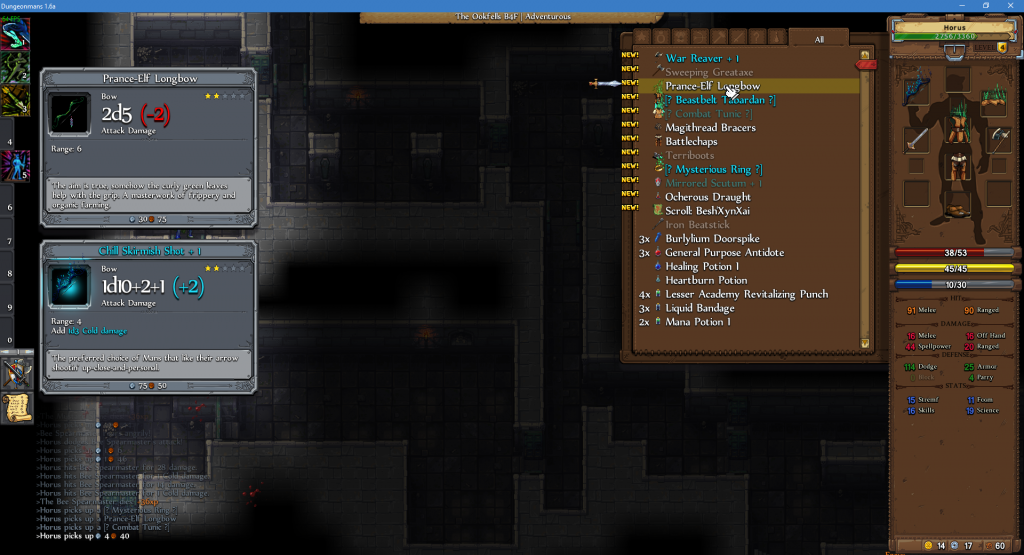 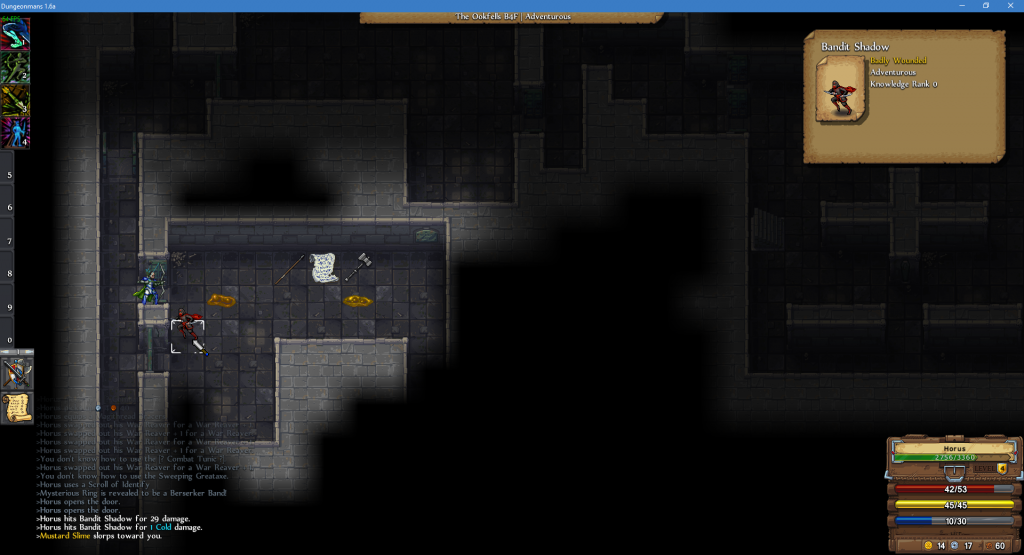 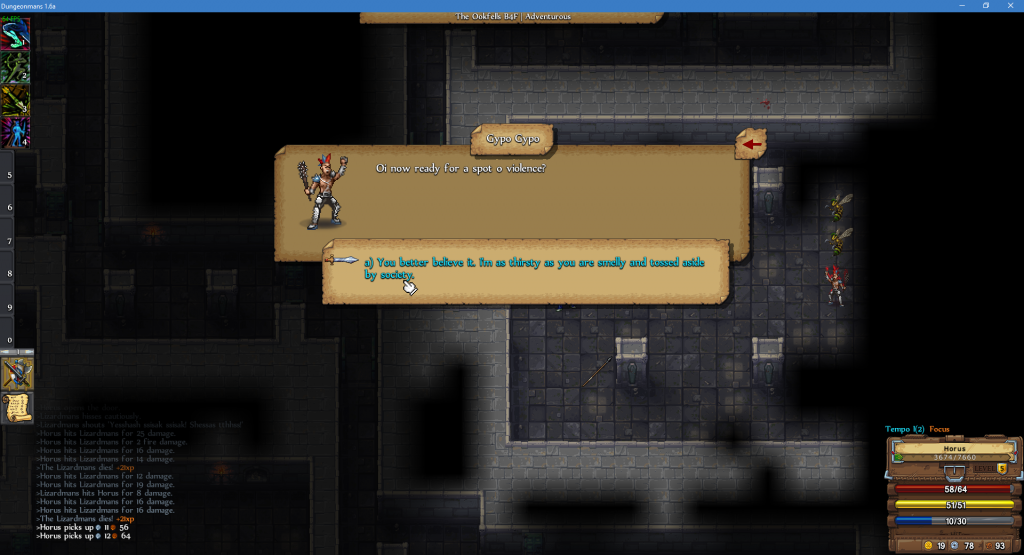 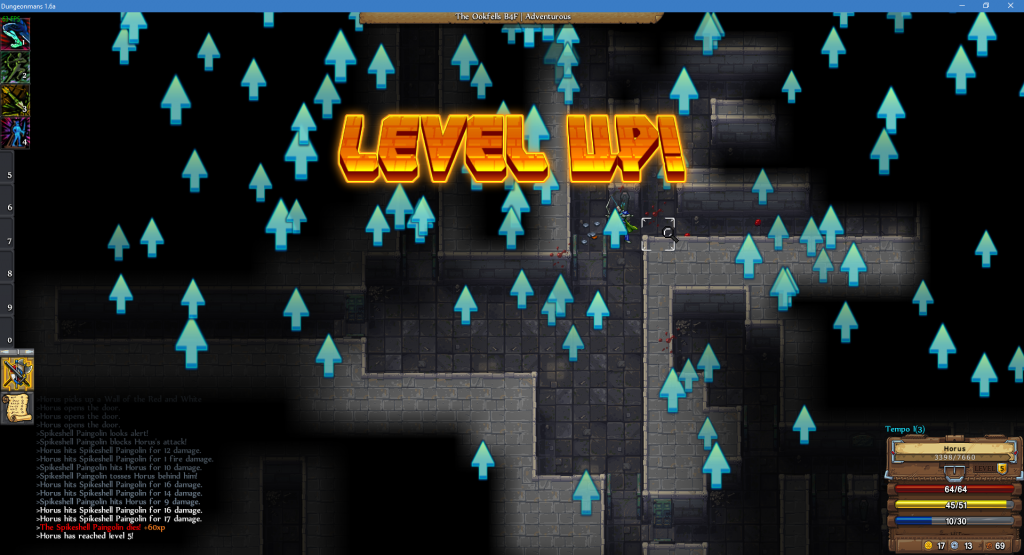 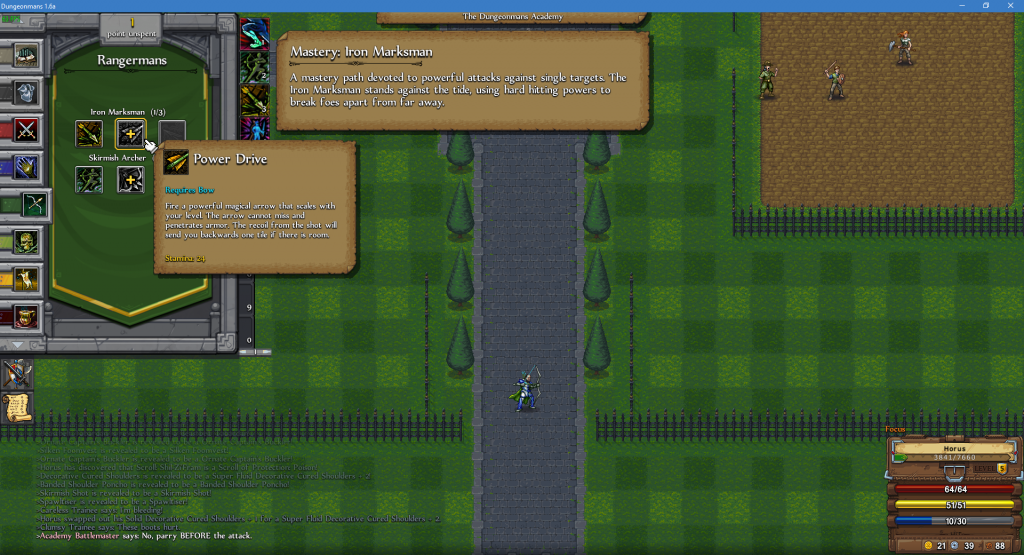 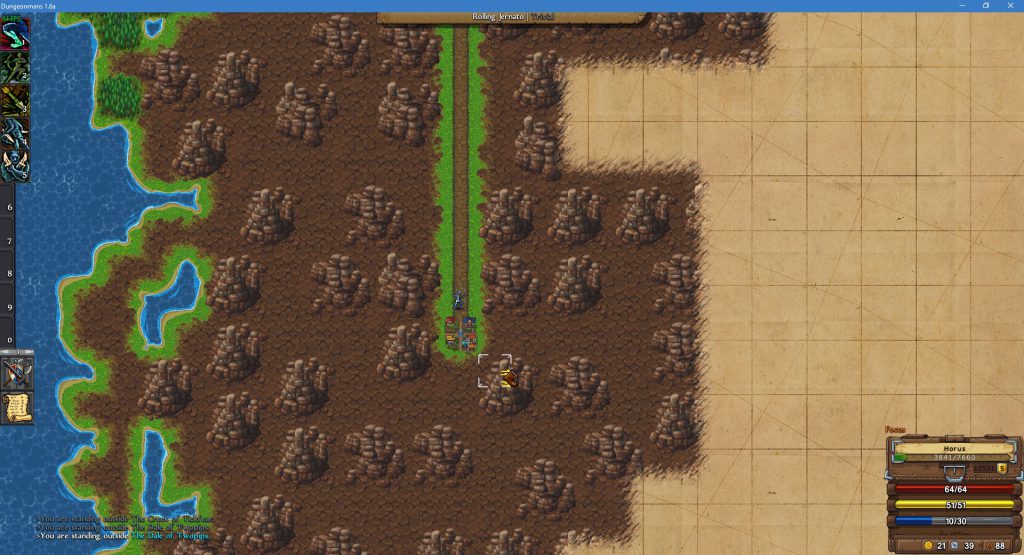 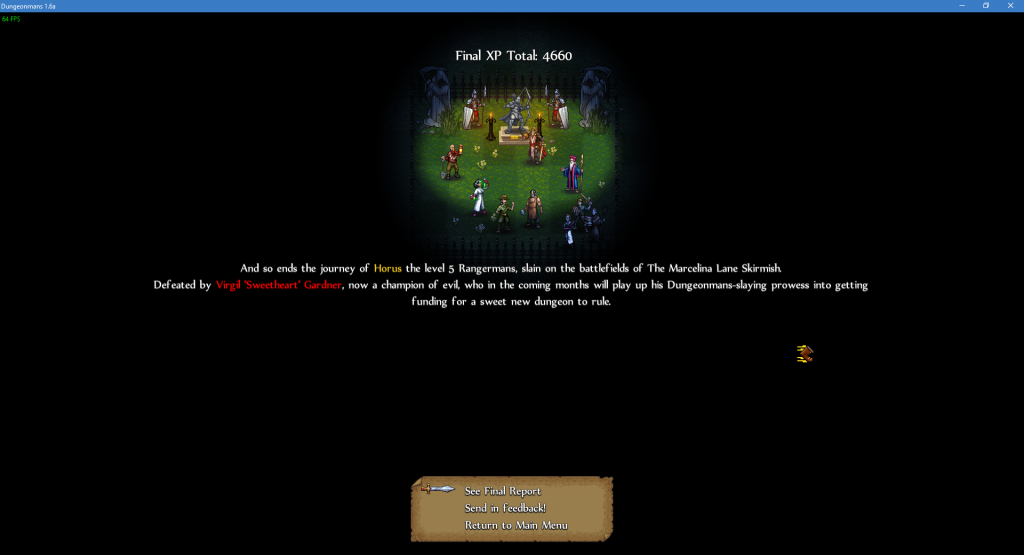 I’ve had a lot of fun with Dungeonmans so far and I plan on playing it more and more going forward. It’s an easy game to jump in and out of in a moment’s notice and I love how it plays!

I definitely recommend picking up Dungeonmans if you’re into the class style RPG gameplay and if you can appreciate the humor of the game roasting the genre over and over again throughout the entire adventure.

It might not be for everyone but it’s a refreshing twist on a genre that was in need of a more modern kick to it. I hope that they continue to add in more skills and content as they have for the past few years!

Do you think it’d be your type of game?