Origins takes place in Ancient Egypt and for a long while I’ve been interested in reading up on Ancient Egyptian times so it’s pretty cool playing through and exploring Egypt as Bayek.

If you’re looking for an interesting story with this one then you’re in for a treat. Maybe I’m a bit bias since I have studied up on Ancient Egypt in the past but the story of Bayek, who you play as, has been good so far.

Origins is all about how the assassin’s creed actually started. I haven’t yet gotten to the part where the creed forms but something tells me that I’m getting close.

Bayek is the last Medjay which were were members in an ancient Egyptian military that were sort of a “police force” if you will. They protected certain areas and scouted around the desert.

I don’t wish to spoil anything but if you’re curious about some more details of the story then this next bit is for you, skip the following screen shot if you don’t want to spoil little details on how the story begins.

As you venture around Egypt as Bayek and serving his purpose as Medjay you discover many truths and eventually it gets into how the brotherhood began.

The Apple of Eden is definitely involved here… If you’ve played other Assassin’s Creed games then you can get a general idea of what that means for Bayek.

The Origins map of Egypt is huge. It’s going to take you a while to explore everything if that’s what you plan to do. Ubisoft Montreal is behind the development of Origins, they worked with historians and experts on Egypt to get the art and atmosphere down.

Personally, I think they did an excellent job. This is as close as you’re going to get when it comes to being able to explore Ancient Egypt in a virtual world.

As far as what exploration means in Origins, I like the changes that they’ve made. In other titles, you had an open world experience with some side quests and some random locations to explore and you’d maybe find some treasure and trinkets to use.

There’s a similar concept here except it has been scaled to a big level. There are a ton of locations to discover and each location has its own set of location objectives such as finding treasure or killing specific enemies.

Each area has a bunch of locations, side quests and hidden goodies. Below is a peek at the map, each outlined area has all of its own locations to discover. 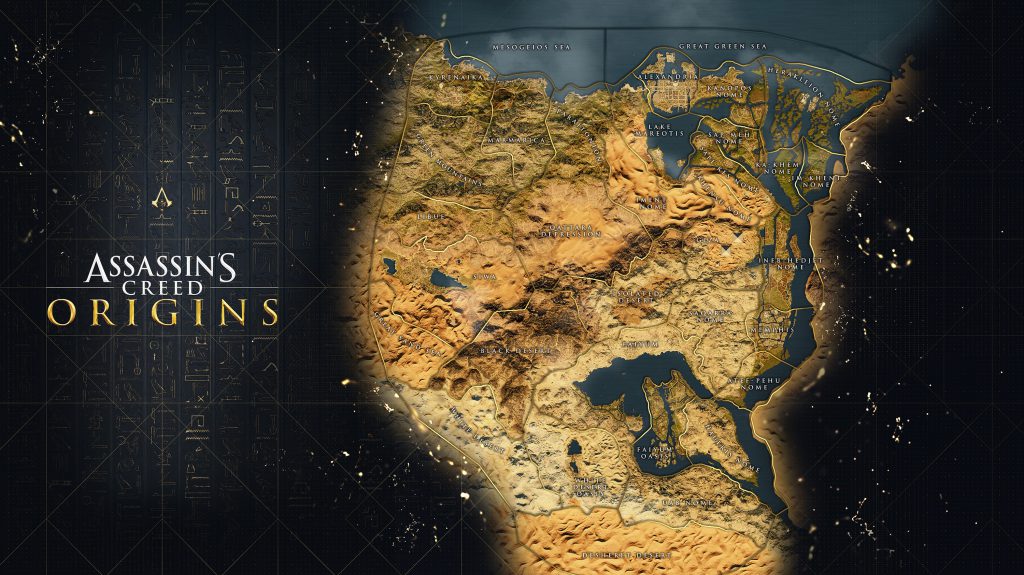 My favorite areas so far have been Giza and getting to the top of a pyramid and Alexandria since it is a big city with a ton to do.

You’re able to explore most areas without having to complete parts of the game but it isn’t recommended to do so… Enemies are a lot tougher in other areas.

There are also a ton of side quests to complete as well which all have their own stories attached. I’ve seen some people compare these side quests to The Witcher III and honestly, I have to disagree a bit there. 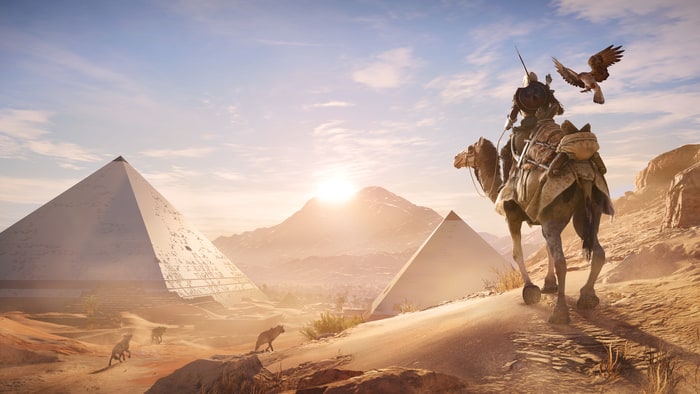 The side quests are still fun, they’re rewarding enough to make them worthwhile but most of them are some of the same actions rehashed.

Listening to why you’re helping someone out helps with the immersion but I think they could have went the extra mile here.

The Witcher III did this extremely well, almost every side quest in that game has you immersed with unique dialogue and actions. It didn’t feel like I was repeating the same actions.

When it comes to the main quest line, there is a lot going on and it’s very immersive. There have only been a few side quests that are memorable so far, then again I’ve only explored about 3-4 cities.

I guess what I mean here is that the dialogue for most of these side quests just didn’t have much meaning behind them. I feel like Ubisoft could have done more, but it’s enough for me to want to still do them.

Maybe I’m wrong here and haven’t played enough of the side quests to state that they’re sort of mediocre… I’ll be giving them a chance as I play more through the story.

When it comes to exploration, I have the most fun discovering areas/locations myself and seeing what I can find.

Combat is the most unique part of Origins when it comes to the franchise. Ubisoft has done a lot of things differently here to make combat more challenging and rewarding.

In past games, you’d basically throw smoke screen down and stab everyone. For me, this got pretty old since it was very easy to do and it was repeated with most of the games in the series.

In Origins, you have to think about your next move. You dodge quicker, you can parry enemies, certain weapon types do different moves and enemies are a lot smarter/tougher.

If you’re surrounded by a bunch of enemies then you have to utilize your tools and dodge/parry at the right times if you plan on killing everyone around you. The enemies aren’t messing around in Origins.

Another big aspect to this is that your character, as well as all other enemies, have a level to them. If you’re level 7 and you try going against a level 19 enemy then you’re screwed. You stand no chance.

You won’t deal much damage at all and they’ll be able to almost kill you with one hit. You either have to perfectly execute each dodge and hit or you’re going to be defeated in no time.

I really enjoy this about Origins, as you level up you’re able to put point into an ability skill tree which will allow you to assassinate from above or be able to execute a parry in melee combat.

There are 3 branches to the skill tree which all focus on something different. There is the melee combat area, ranged combat area and a technical side which deals with things such as sleeping darts. 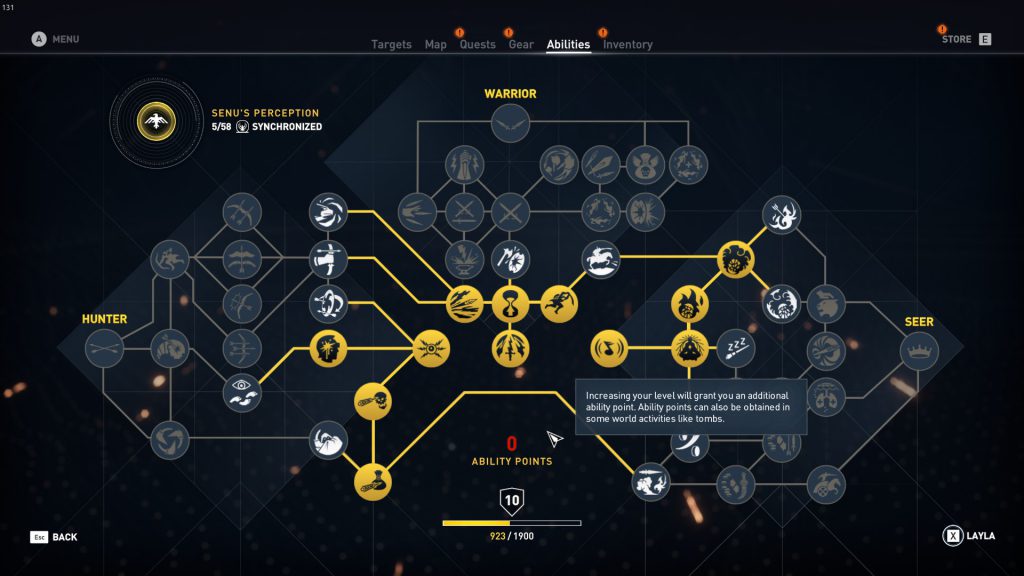 You get to decide where to spend your points. As you move further into a skill tree some abilities will cost more points which forces you to have to save up some of your points if you want some of the cooler abilities.

There are a lot of different abilities and remembering to actually utilize them in combat is important. Because as you have to dodge around and time your attacks right, so do your enemies. The AI isn’t dumbed down this time around, they also know when to dodge.

Overall, the combat isn’t anything like previous Assassin’s Creed games. You’ll have to have strategy behind what you do. You can still be sneaky if you want, using a bow from afar and assassinating from above but even sneaking around is a bit harder in this one.

Melee combat is the most fun for me so far, there are a ton of different weapon types to play around with. I enjoy using regular swords but sometimes switch it up to the spear, especially when there is a group of enemies.

Most of these screen shots are of random scenery, spots in the game that I thought could use some love and to share.

Another cool feature is that there is a photo mode – you’re able to pan a camera around and freeze the game at any time to capture the perfect moment or to get a photo of a certain area that you like.

This has resulted in some sweet shots and they’re all shared with other people that are looking at the map! I love this feature, it allows you to see what others have managed to capture. 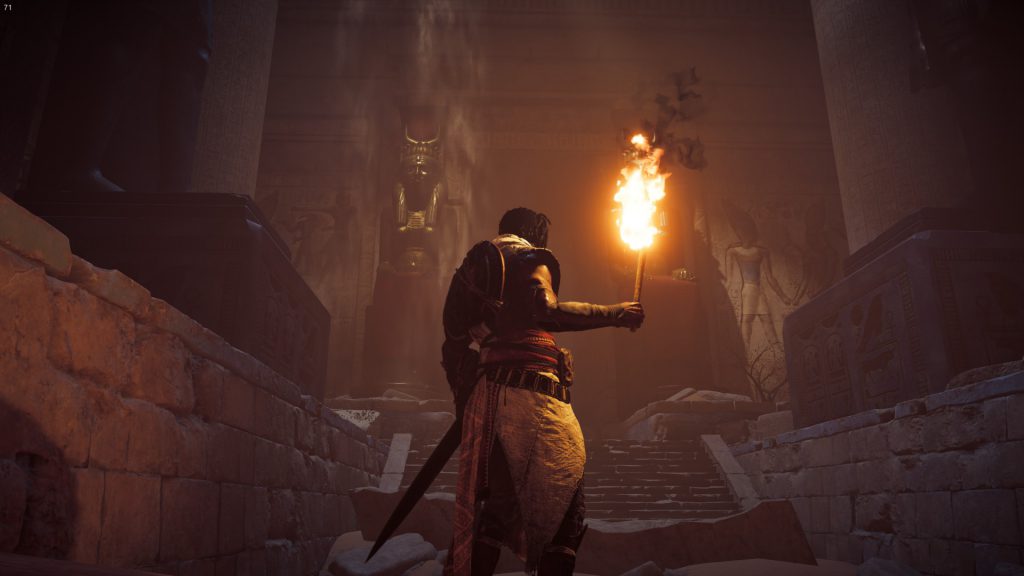 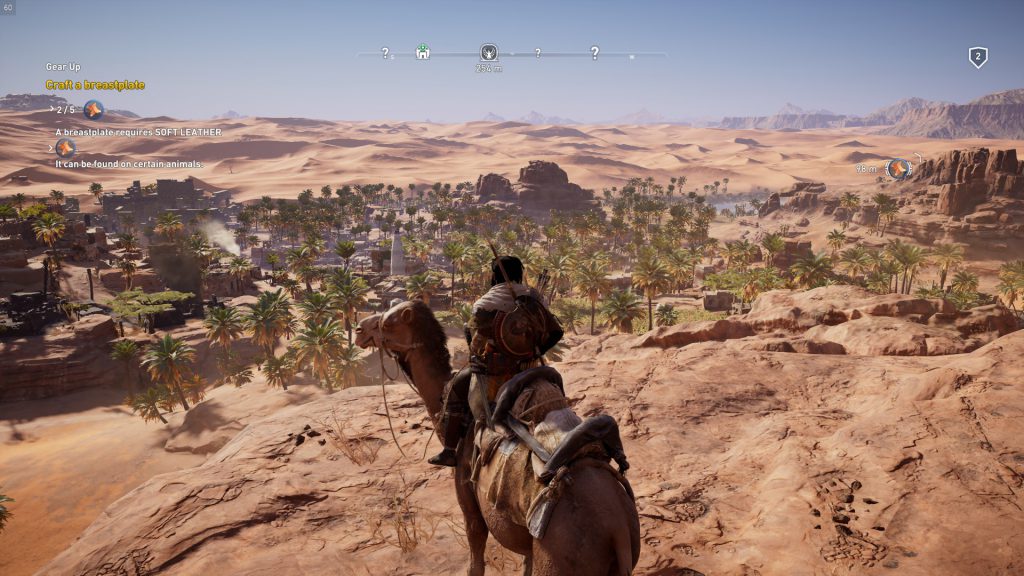 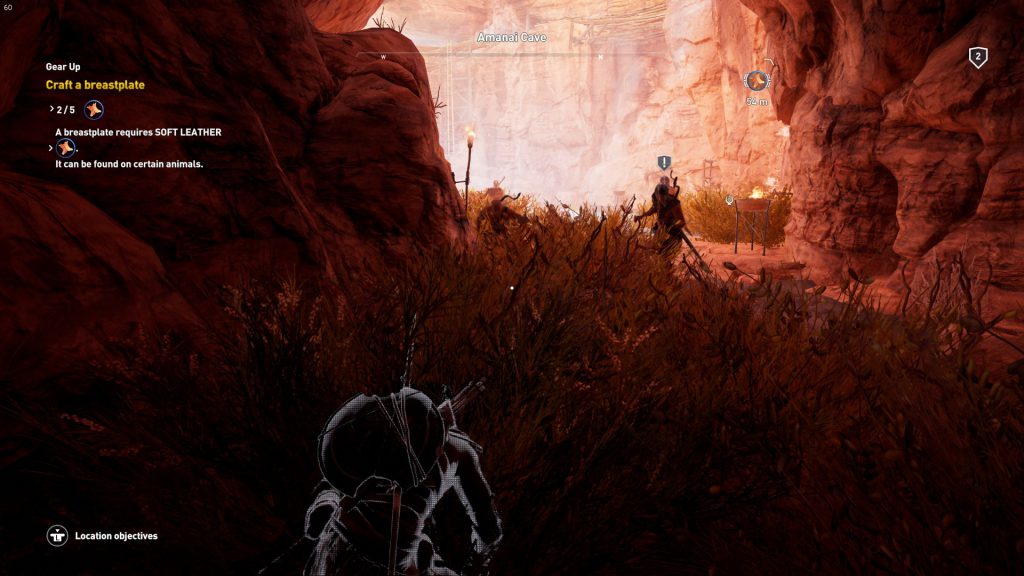 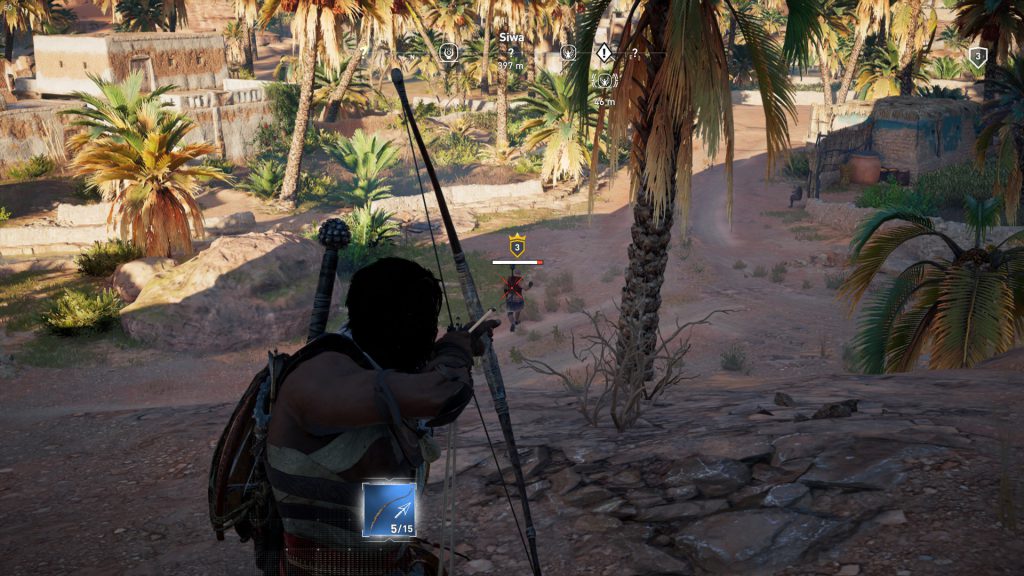 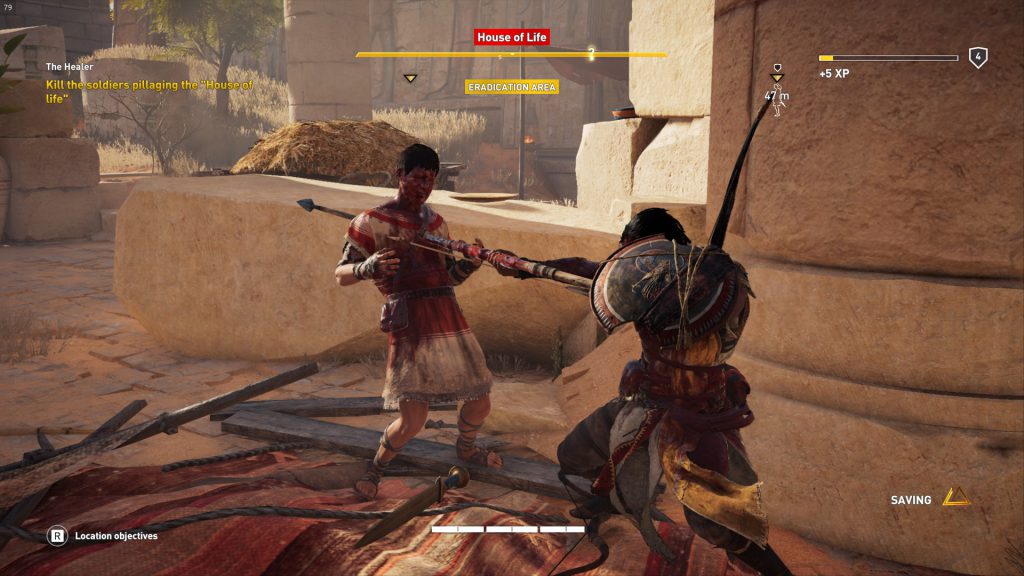 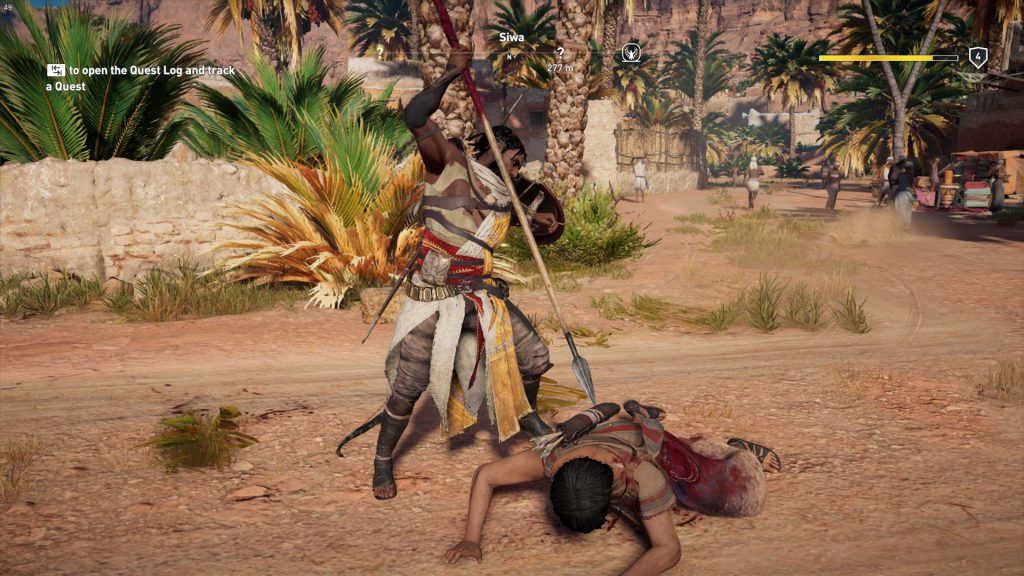 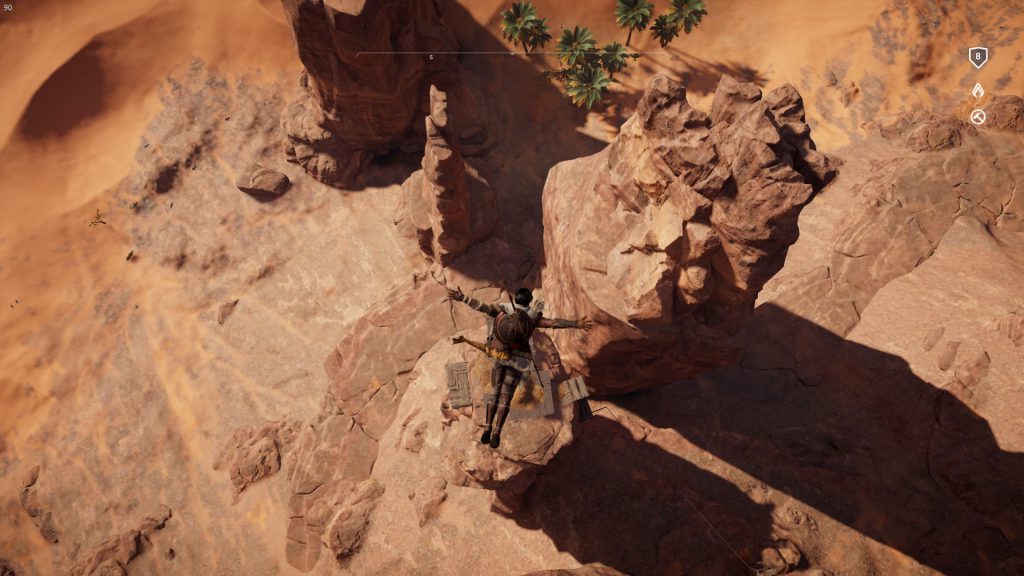 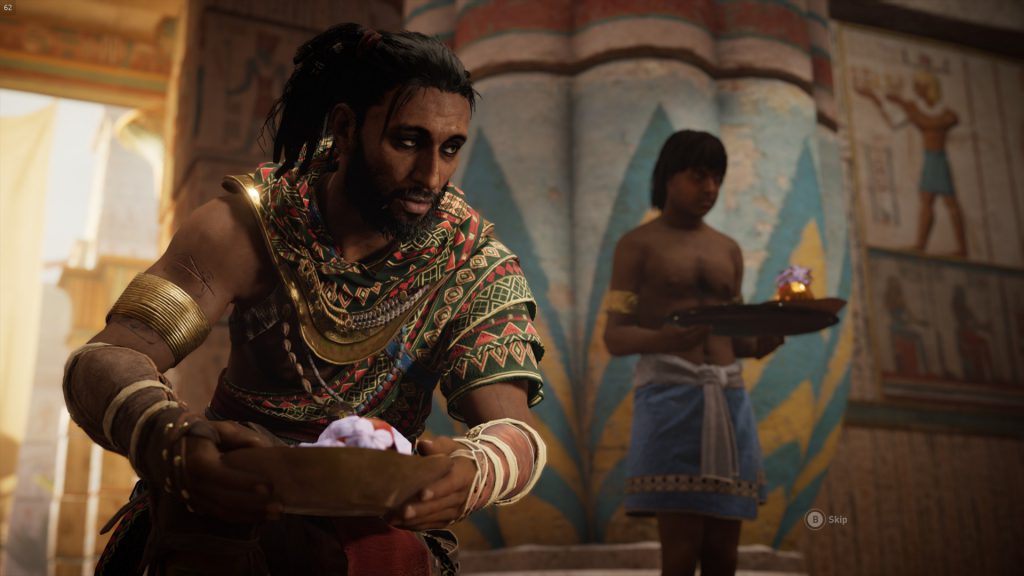 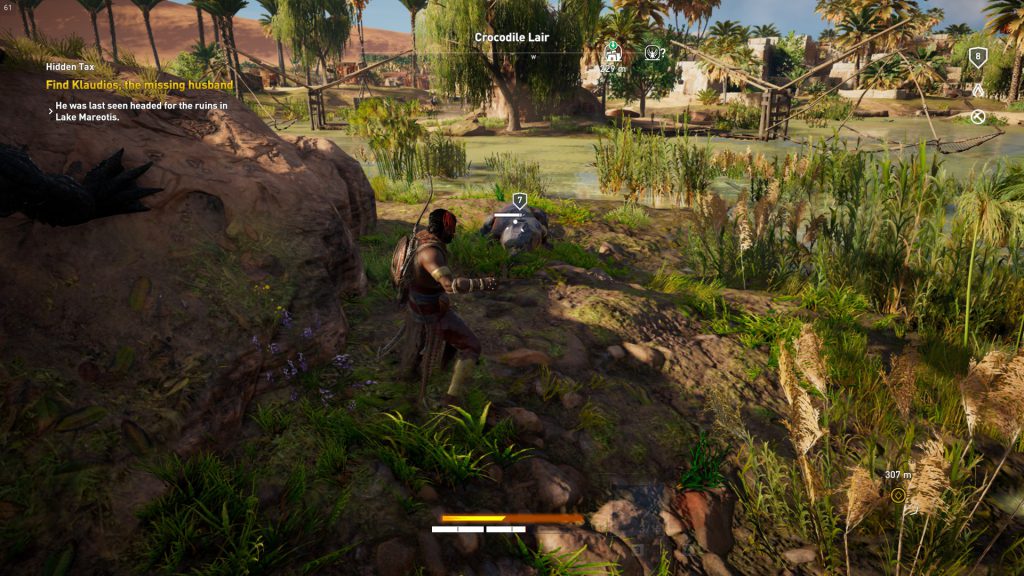 I’ve had the most fun simply exploring around and looking at all of the different areas because of how great the graphics are. There’s something about exploring new locations and finding new areas with this title…

Is Assassin’s Creed Origins Worth Getting On PC?

If you’re a fan of Assassin’s Creed games but you’re tired of the same old song and dance, the same rehashed formula that Ubisoft has used over and over again… Then you should definitely try out Origins.

The combat is very different, the leveling system feels right and the game world is huge. It’s going to take a long while to explore everything there is to see and discover.

From tombs, crocodile lairs and beautiful view points… there is a lot to see and do.

As far as the performance on PC, I’ve heard 50/50. I’m currently using a GTX 1070 paired with 8GB of RAM and an i7-7700k and the performance is pretty solid. In busy areas I’ll dip down to 30-40 FPS which comes down to game optimization but I’m also trying to run the game on maximum settings.

A friend of mine is playing this with an i5 and a GTX 1050 Ti and is able to run it on high with an average of 40 FPS. I’d say that the overall performance is good enough, some have said that they aren’t able to launch at all but I haven’t run into those issues. After all, you can always refund it if the performance isn’t enough for your PC.

So, have you played Assassin’s Creed Origins on PC?

2 thoughts on “Is Assassin’s Creed Origins On PC Any Good?”