I had the same question for a while, especially back when it was released in February. Is XCOM 2 good and if so, what price is it worth? How much gameplay does it have?

I went ahead and picked this one up a couple of days ago because it was on sale and I truly have to say – I wish I had bought it sooner.

To be straight up with you – I’ve never really been a huge fan of turn based strategy games. Something about having to take turns with others breaks the immersion for me.

XCOM 2 is the first game where I actually don’t feel like the immersion was sacrificed for the sake of gameplay. I still feel just as immersed if I were playing a third person shooter.

The reason why I feel that way is because when you go to fire at an enemy or sometimes when you move a troop behind cover the camera will pan into an “action” scene showing you a whole different perspective rather than keeping the bird’s eye view all the time. 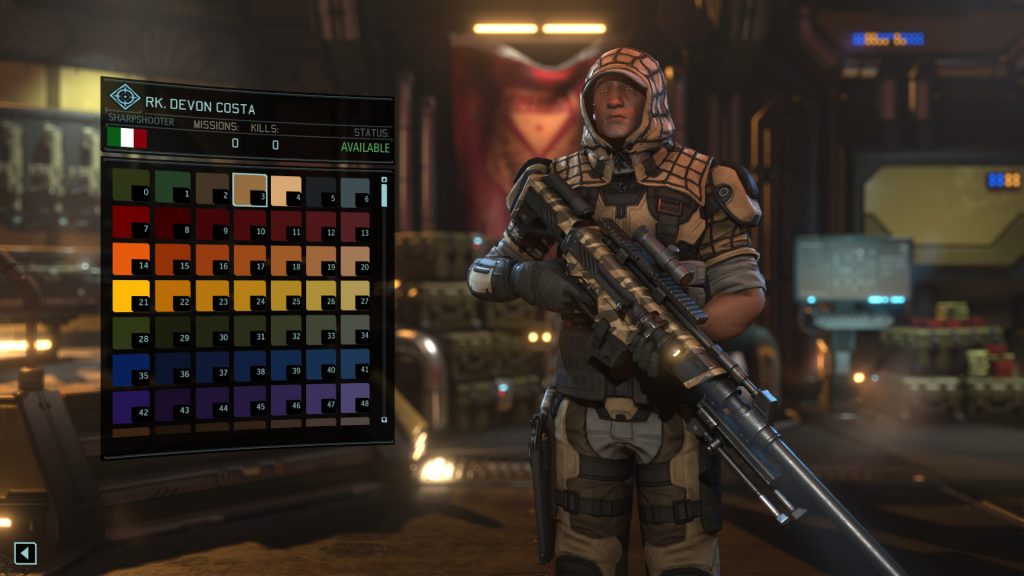 I love that the developers wanted to make sure people still felt as if they were in the battle while commanding different troops, that and the customization is super fun to where you actually get attached to different characters but trust me – you do not want to get attached at all.

You can name a soldier whatever you like, change their nationality, armor colors, the color of their weapon and even their voice.

This makes you become attached to specific characters because of the time you put in to make them resonate with your personal taste.

Customization is my favorite part of any game and I never realized the level of customization that this game adds. That and they have a Steam workshop where you can add even more customization options and other game mechanics to make the game that much better.

You start out with some soldiers in the beginning of the game but then you can recruit new soldiers by spending supplies. These soldiers start out as basic rookies that are able to have an assault rifle and throw grenades but after they are in battle for a while they will level up to different ranks allowing them to go into different skill trees.

So far I’ve seen sharpshooters which are snipers, specialists that have a small drone flying with them, rangers that are able to execute deadly sword attacks and grenadiers which have a strong cannon along with a grenade launcher.

Each of those classes have different abilities depending on which side of the skill tree you decide to go with on each level up. For example, when a ranger levels up for the first time you’re able to decide whether his melee attacks are stronger or if he is able to stay concealed in stealth when the rest of the party is not.

There are many tiers to the skill trees and I have yet to really explore what they all have to offer but it really adds a certain depth to the game, every solider can be good and bad at different things.

At least that’s what I’m seeing so far with my play-through.

I’ve read up that the maps are all procedurally generated. All of the soldiers that I’ve had join have had different names and bios as well.

All of them can be completely customized as I said, so you could completely change their nationality, skin color and what not.

When you go into the briefing room inside of you ship, which is called the Avenger, you’re able to scan for supplies, complete different missions and prevent the alien forces from completing their goal of world domination. 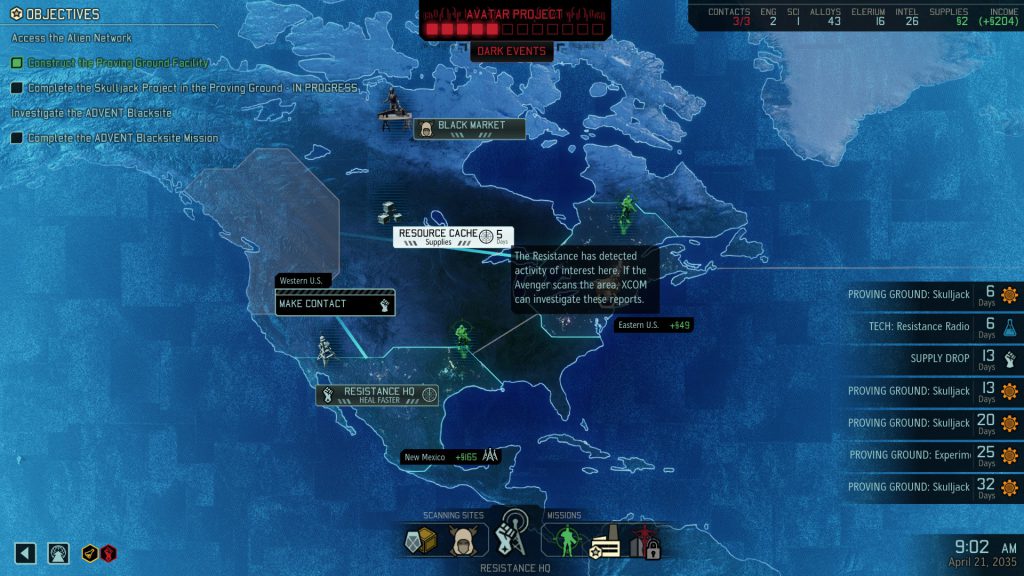 This is the most interesting part to me because I thought that the game had a linear campaign but it’s actually the exact opposite. I can totally see now why there are still so many people that play – it’s different every single time!

I think that the best part is how when a soldier dies, a soldier really does die. If you don’t bring their body back to base for healing, you’re going to lose them for good.

This is why I was talking about getting attached to certain characters earlier – you’ll go crazy customizing that one ranger that is never supposed to die and then in the next mission he/she is gone forever.

Recruiting more troops and getting soldiers to level up isn’t hard, it costs a small amount of supplies to recruit new troops and then you just need to get them to get some kills out in the field for them to level up.

I have yet to see a way to pick which class they are going to become after leveling up from being a rookie, it seems that the game randomly picks that as well making it that much more randomized.

If you lose your specialist that is best at healing the team with his/her drone then you’re going to have to level up a new rookie and hope that they become a specialist in order to get something similar.

This makes the game rather difficult but so far it really all seems balanced. I have one ranger that has lived on for a long while and every time that my troops gain ranks I always go back to the customization to make them look more awesome than they just were. 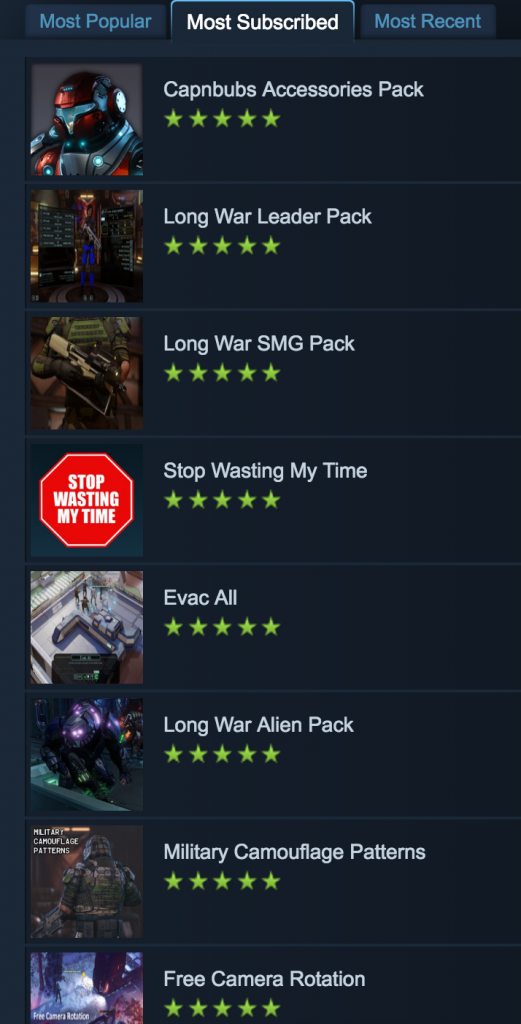 There are a plethora of customization mods, character mods and quality of life mods that really make the game shine. You can add different types of weapons, new enemies, game mechanics to smooth out the gameplay and iconic characters from other games such as Tracer from Overwatch!

There are some mods that break the immersion – there’s a weapon mod that turns a gun into a dog for example… those types of mods aren’t for me but it’s awesome seeing that there’s a little something for everyone.

Adding any mod doesn’t mess with the ability to get achievements which I found kind of odd because there are some mods that will make your soldiers basically invincible but I can also see why they’d want to make sure that the achievements are still doable.

It’s awesome being able to have a variety of weapons and having certain small mods such as Stop Wasting My Time or Free Camera Rotation really help to smooth out the game and make it better.

Stop Wasting My Time makes the overall gameplay smoother by stopping the game from pausing during combat and moving troops. I can’t explain how annoying it was before having this mod but it’s a must have for every single XCOM 2 player for sure.

Free Camera Rotation lets you have total freedom of controlling the camera from the pan to a full rotation. Without the mod, you can only adjust the camera rotation with the Q and E keys which turn the camera 45 degrees each time they’re pressed.

Most of the mods don’t break the game and right now I’m only using mods that increase my customization options and make the overall gameplay more enjoyable. After I beat this first play-through I’m definitely going to get crazy and add a bunch of different mods!

There is A LOT more to the game than what I’ve explained above but I really want to stop there. This is the type of game that’s really hard to fully explain in one post and I’d rather you just hop into it without knowing absolutely everything.

So let’s get to some screen shots! This is easily one of the most beautiful games that I’ve played simply for how many features/mechanics they have… it’s amazing that the textures and animations are done this well. No wonder this game is over 25GB!

All of the following screen shots were taken in-game: 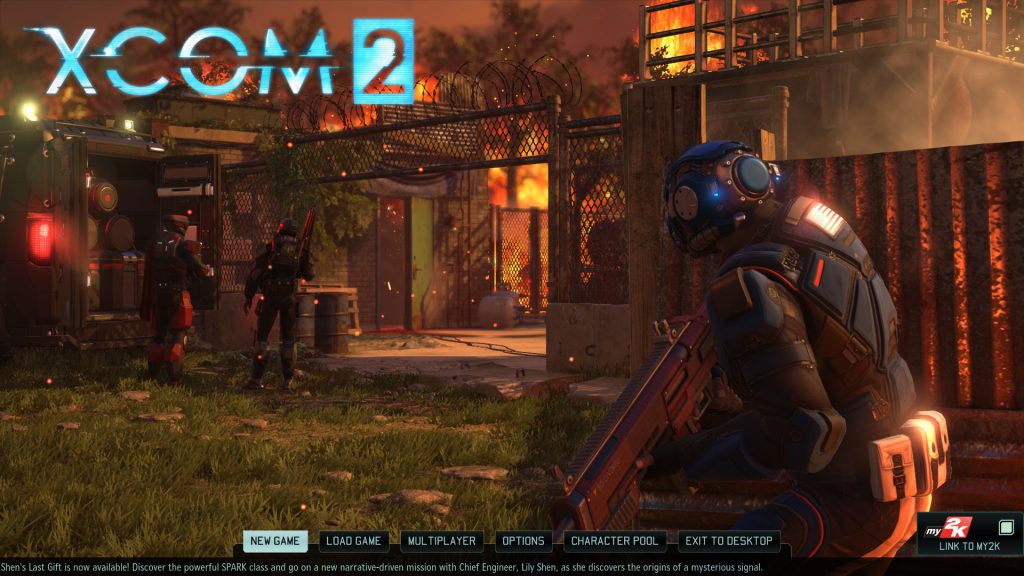 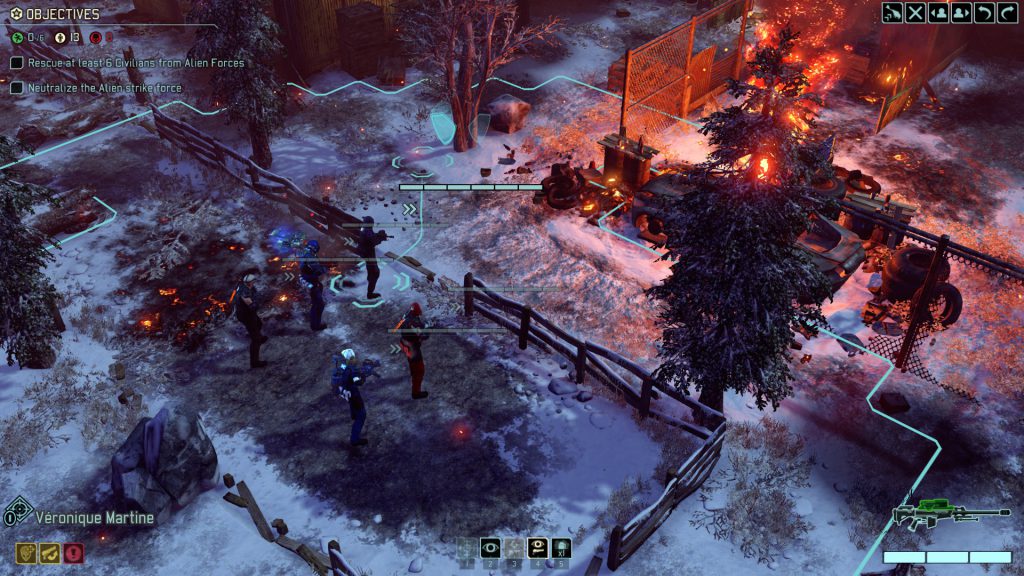 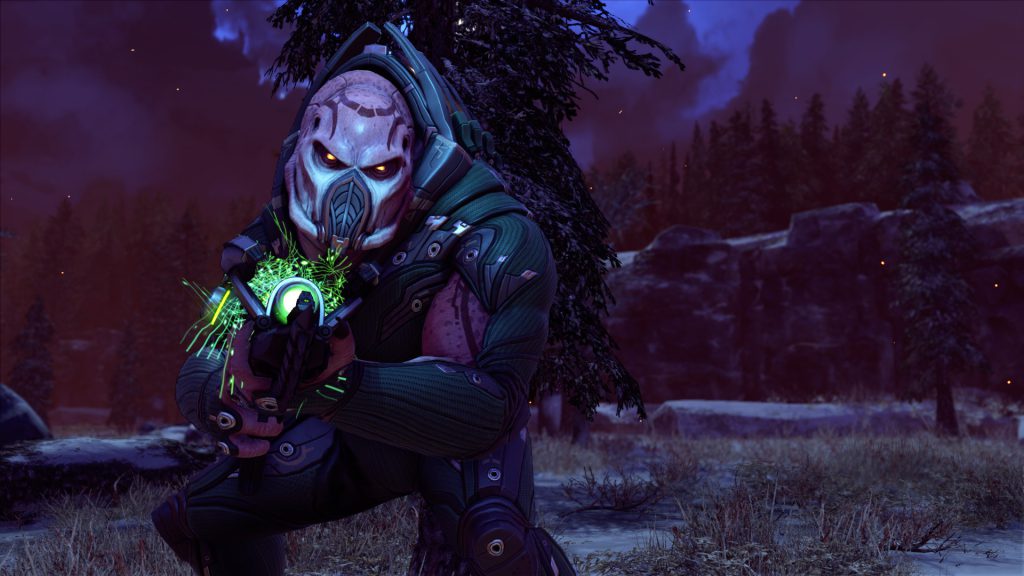 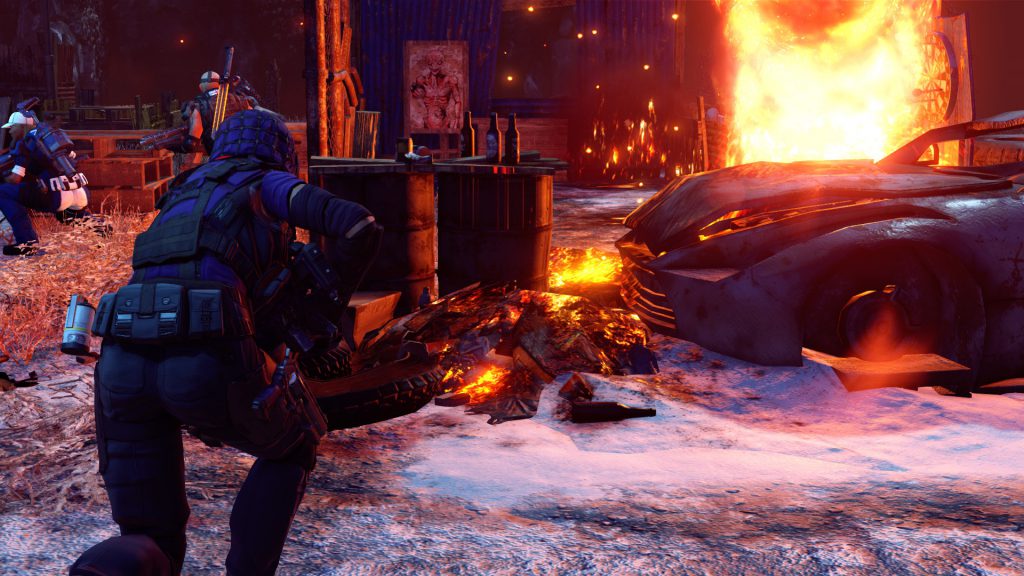 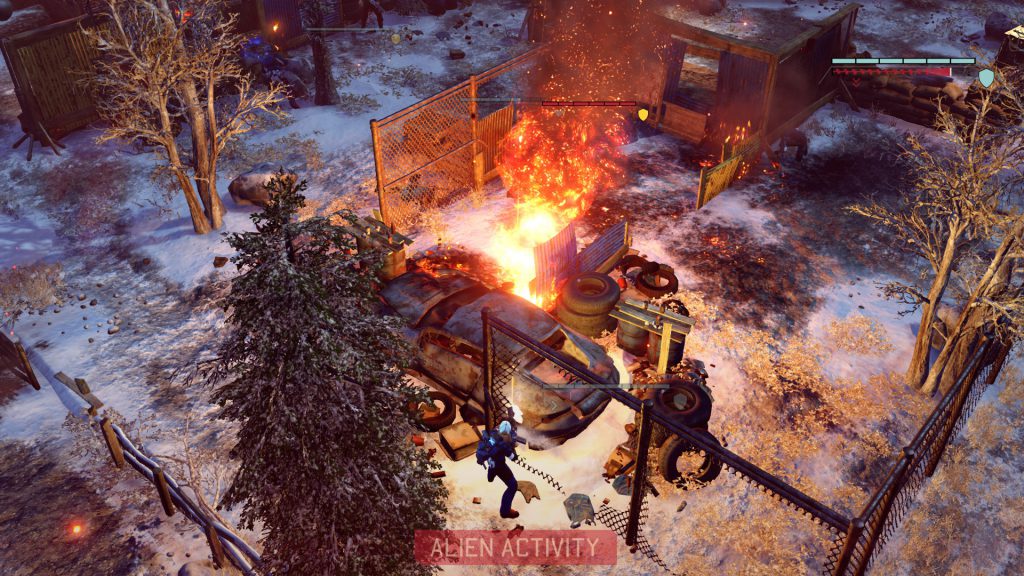 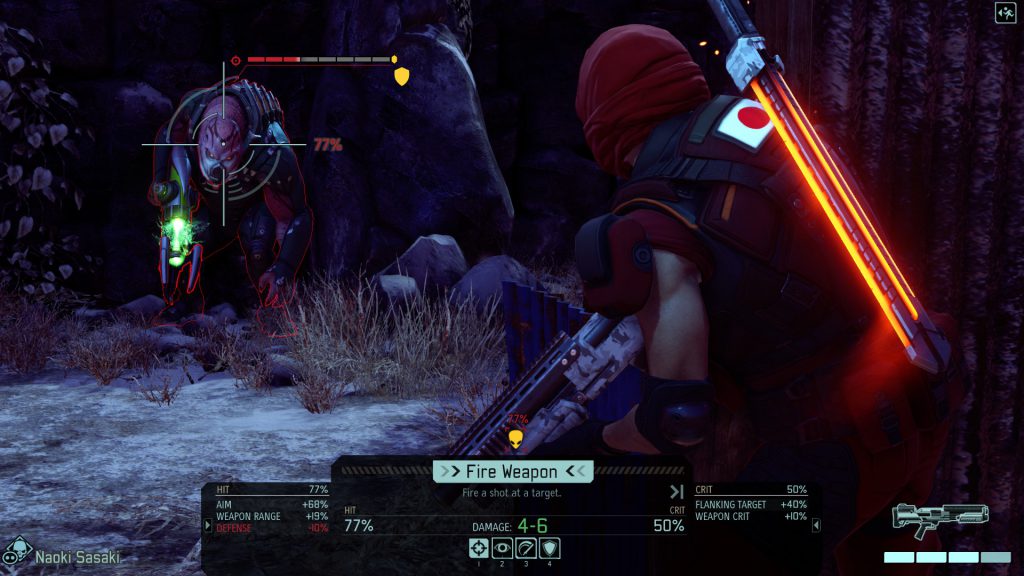 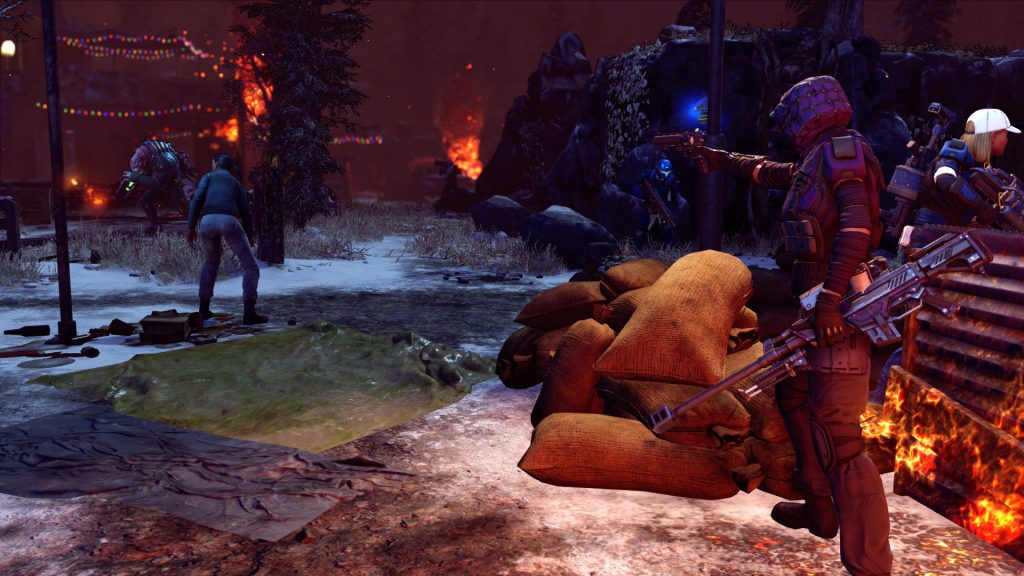 Aren’t the graphics just awesome? This is what I’m talking about when I say that the game delivers on the immersion – you really feel like you’re right there in the battle!

There’s So Much More

As I said earlier there is just so much to this game that I wouldn’t be able to properly cover everything in just one post. You’re just going to have to play this game yourself to really understand what it brings to the table. It absolutely exceeded my expectations.

So, have you played XCOM 2 before?

Or are you going to be picking it up now?