It’s time to review the ASUS G11CD US009T desktop computer because I believe that it’s one of the better and more fair pre-built computers out there for gaming.

As you can tell from many of the other pre-built desktop reviews that I write on the site, I’m not a fan of pre-built computers. 9/10 times you’re going to get ripped off because you could spend the same amount and build a PC of your own for a lot more power.

ASUS didn’t do too bad with this one though. You’re still better off going with a build of your own for optimal power per dollar spent, but these specs are “doable” for those that really don’t care to try and go for a build of their own. 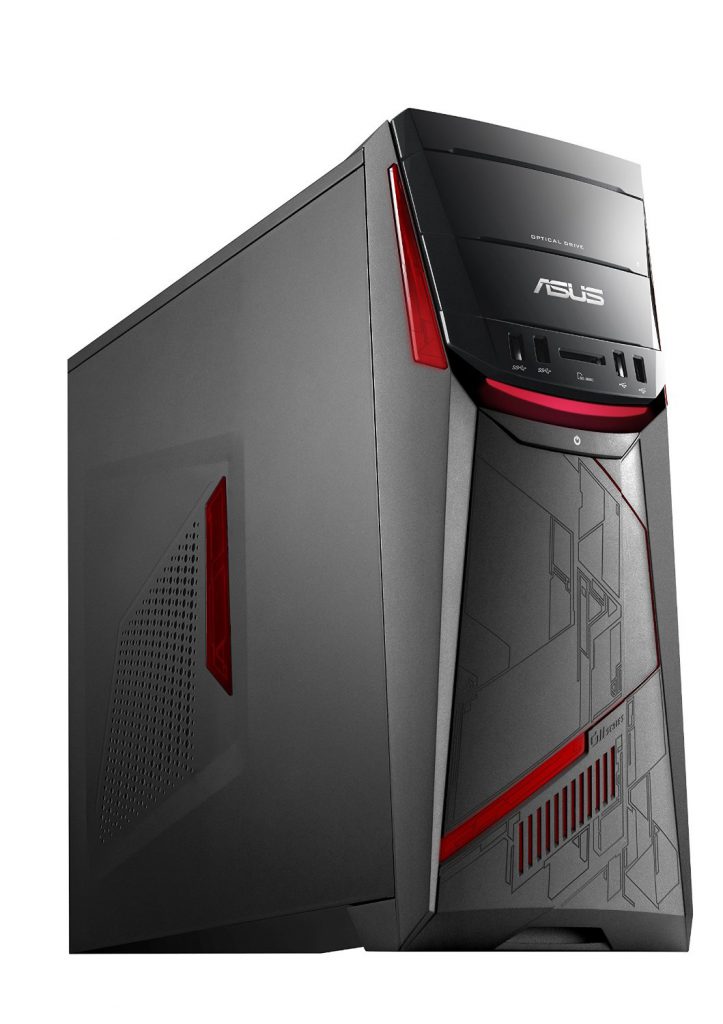 Hardware Is All That Matters

If you’re looking for the high quality PC gaming experience that every PC gamer talks about and dreams about – it’s going to be all about the hardware. The guts that are inside of your PC.

As I stated above, 9/10 times you’re going to get ripped off from going with a pre-built because the company tries to make a huge profit on the computer.

This computer is a different case. I still believe that you should do a build of your own, especially with the weird warranty issue that is around this PC but I’ll get to that later on in the post. 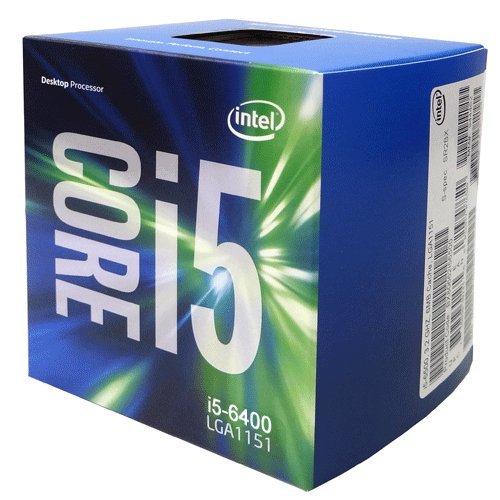 If you were to spend close to $800 on a PC build of your own then you’d have a good bit better performance. You’d also be able to have parts that are able to be overclocked which future-proofs it that much more.

This desktop comes with an i5-6400 processor and a 2GB GTX 960. These specs really aren’t terrible for the price point that they’re asking for.

I always say that if you’re going to be using a GTX 960 then it makes a lot more sense to go with a 4GB one because it allows you to have more life behind it when you decide to play on higher resolutions or if you have VR gaming in mind.

2GB of VRAM on a video card just isn’t going to cut it when you think of 1440p gaming and high quality VR gaming.

Now for 1080p gaming today, 2GB of VRAM is right at the sweet spot. A GTX 960 also has the architecture needed to really provide a quality experience with games such as Overwatch, DOOM or Fallout 4.

The i5-6400 is definitely a really good CPU and it’s going to be able to handle a lot of what is coming in the future. With it being the newest technology from Intel, you can feel good knowing that it was made for the future. Again, it could be better at this price point on a custom build, but that doesn’t mean that it’s not going to do well.

All in all, when it comes down to the hardware – it could definitely be more optimal. But I’ve seen a lot worse when you look at power per dollar spent on a pre-built.

One Thing That You NEED To Know…

I really want to emphasis this because this single thing is the reason why I don’t have it a bit higher on my rating scale.

Yes, this PC comes with a 1 year warranty… but if you decide to open up the PC and break the sticker that acts as a “seal” for letting ASUS know that you messed around with it – you’ll void your warranty.

This actually makes me really upset because one of the biggest reasons someone would/should get into PC gaming in the first place is having the ability to upgrade the hardware down the road to increase performance levels.

So by wanting to upgrade to a newer Skylake CPU or a newer, better graphics card – you’ll lose all hardware support from ASUS.

This doesn’t mean that it’s not possible to do upgrades. It’s just that the moment you open up the case, you completely void the warranty.

What Are You Looking For?

That’s what you really need to ask yourself.

Are you looking for the highest quality PC gaming experience possible while spending over $700? Then you’re definitely going to want to do a PC build of your own – you’ll have much more performance that way going forward.

Are you looking to game at 1080p right from the get go? Do you not care much about optimal hardware at a certain price point meaning that having the computer work right away is more important to you? Then this wouldn’t be a bad decision.

It’s unfortunate that ASUS’s warranty gets voided with upgrading but I will still say that I encourage it for those that are planning on getting it. Sure, you’ll void your warranty, but some day – more specifically the graphics card – will become outdated. 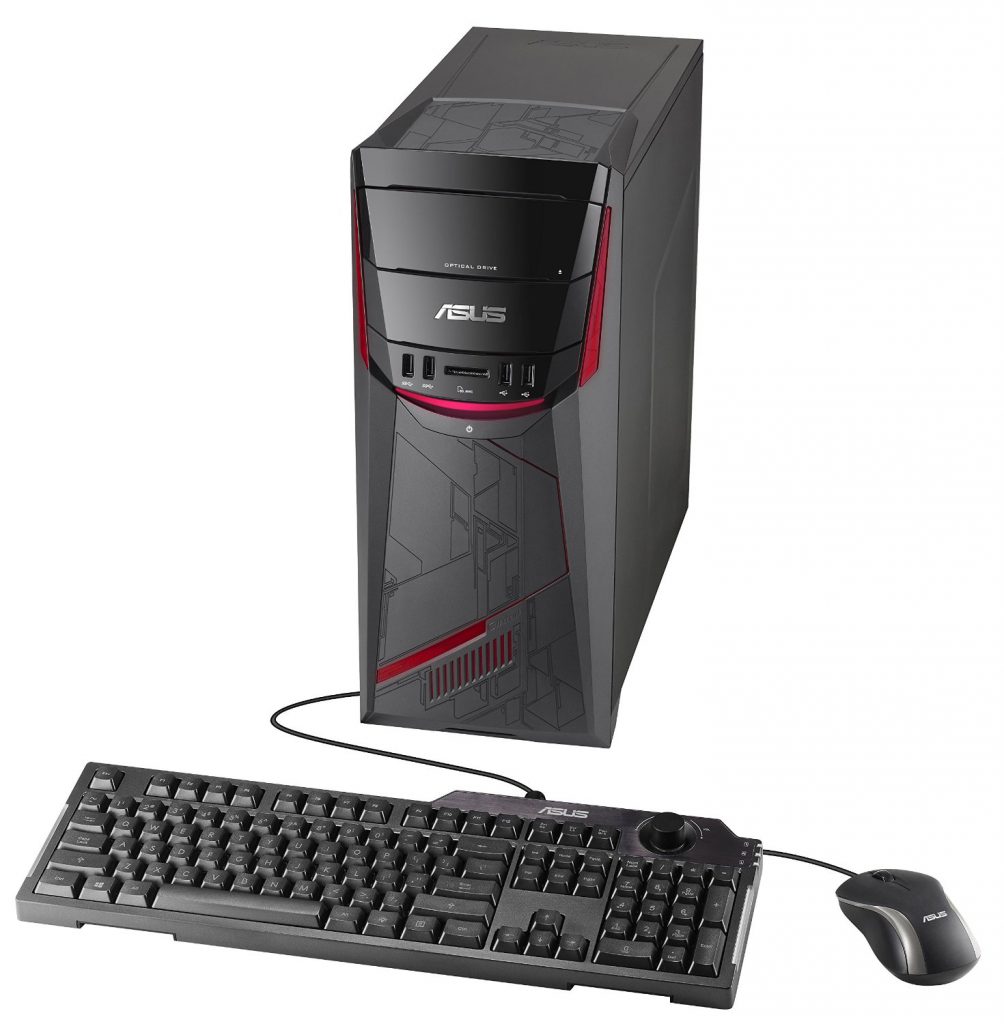 Though you could also look at it in the form of upgrading after the 1 year warranty is up. I know that the GTX 960 is going to be good enough for 1080p gaming for another year, most games will run at a tweaked high/med setting with good FPS rates.

Another thing that you should take note of – this desktop also comes with a keyboard and a mouse.

Most pre-built computers like this come with a very basic keyboard/mouse combo that doesn’t look cool and also doesn’t have the right performance for 1080p gaming – I’m talking more so with the mouse.

When it comes to PC gaming, the keyboard should really just be something that you like. If you like the “click” sounds that a mechanical keyboard makes then that’s the type of keyboard that you should use. If you want one with lights, get one.

The keyboard that comes with is an ASUS keyboard and it has a volume nob in the corner. A pretty cool feature, though the biggest feature that I look for in a keyboard is missing – multimedia keys.

I like being able to skip a song or to pause music at my demise. This keyboard doesn’t have any of those shortcuts.

The mouse is going to be just fine for 1080p gaming. The mouse is actually pretty important, especially when it comes to DPI.

I’ve read that the mouse that comes with can go over 2000 DPI which is plenty for 1080p gaming. 1600 DPI is the “sweet spot” for that resolution because it just feels most right for most people. Though the DPI setting and mouse sensitivity is also going to be something that you figure out based on your personal level of what you want.

Not An Entirely Bad Option

To conclude, I could say that I can recommend this to those of you that are completely against doing a custom PC build for yourself.

If you’re just that scared of it or if you don’t believe you can do a PC build… this would be the ideal desktop to go for.

You can still upgrade it – it’s just that you’ll void your warranty so it might be best to wait for a full year before deciding on any upgrades.

If you’re interested in maximizing your power per dollar spent with a PC build then I encourage you to check out the different guides I have here, there are videos out there that show how it’s done step by step and I’ll also help you move forward with getting all of the necessary parts together.

Be sure to check out the Amazon reviews if you’ve decided that you want to go the pre-built route. Going with a pre-built also has its pros such as having a keyboard and a mouse right away and having Window pre-installed into the hard drive. I just strongly believe that anyone really can to a build of their own.

So, are you going to be picking up this ASUS desktop?

Or have you decided that you want the most power possible at this price point?