So last night I finished building the PC build of my DREAMS, it’s everything I’ve ever wanted and then some. I was able to use some old parts which helped out!

Scavenging some parts from my old PC build was nice but I wanted to make sure that most everything was going to be new. I got a new case, a new video card, a much better processor and I added a solid state drive to it as well.

This is the first time I’ve been able to actually experience 60 fps on max settings with some games and it’s my first time experiencing the speed of a SSD. Let’s get right to it! 🙂 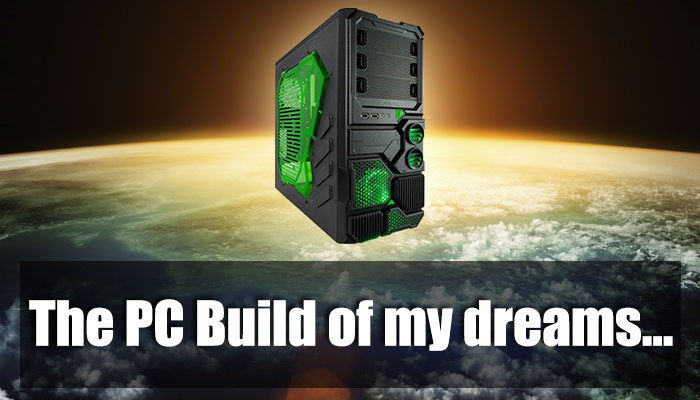 Putting It Together Was A Lot of Fun, Kinda

I have plenty of experience putting PCs together for both friends and family but I went ahead and followed the instructions for my build from the video that I always share with you guys.

I did that because it was sort of nostalgic for me and it also really ensured that I wasn’t going to forget any steps. There were a few things I did wrong such as pointing the hard drive and solid state drive the wrong way at first so the side panel didn’t fit, I was touching the wrong prongs with my screwdriver to turn it on and there was one point where I thought I had broken the graphics card…

BUT all went well in the end and the build is 100% finished, I couldn’t be happier! 🙂

The case that I got came with SSD slots and I had thought that I should have had the parts of the drive to plug into the SATA ports and the PSU to be facing me but that wasn’t the case… I had to flip them around and try to fish the cables through with all of the other cables, it was a small mistake but one that still made the process a little longer than it needed to and I was absolutely dying to play some games with the finished build!!

For some reason I thought that these two random prongs on the motherboard were the way I was going to power it on but I didn’t even put 2 and 2 together to make 4… obviously the prongs to turn the computer on were the power switch prongs (duh) but it didn’t take too long to figure that out! 😛

Now almost breaking my graphics card… I didn’t actually come close to breaking it, I was actually just really paranoid about it…

There was one time where my necklace like hit the back of the card and I had a small fear of it being short circuited and then I had also hit it pretty hard while trying to unplug cables from the SSD and HDD to flip them around the other way… but everything turned out just fine and my worry was nothing to worry about thankfully.

Another thing that I think all PC builders go through is the thought that you have static electricity on you and that touching the parts are going to screw up everything. Honestly, 9.8 times out of 10 nothing is going to happen if you don’t wear rubber gloves or touch the PSU while the switch is set to off to ground the static from you.

But I always keep myself on the safe side so when I was handling the motherboard and graphics card I made sure to wear rubber gloves. It wasn’t until I had to start screwing the motherboard into the case when I decided to take the gloves off and start grounding myself with the PSU.

All of the parts came in at around the same date, the video card and processor were the last two pieces to come in and once they came in I went straight into the building process. All in all it took me about 1hr 30mins – 2hrs to finish the building process simply because I sort of took my time and didn’t really care how long it took me although my desire to get it done was insane.

I am using a HDD, a network adapter, a blue LED fan, 8GB of 1333mhz DDR3 RAM and an Asus CD drive from the old PC build. Below I’ll show you everything new that I got for the build!

The parts listed in GREEN TEXT are parts that I didn’t have to pay for because I had already had them from my last build, everything else was bought brand new.

I was able to save a good bit of money to grab much better parts by waiting for those sales to go by and it was also a big money saver being able to use the other parts from my old build!

The difference between this build and my old build is being able to actually run some certain games. I’m coming from a i3 processor and a Radeon HD 7770 1GB video card so these upgrades are very much so beyond my old specs in performance.

With my old build I would lag during Fallout 4 and would have to frequently restart the game because it was running at around literally 2 frames per second.

I don’t think my version of the i3 was anywhere near ready for running the newest AAA titles and I know for a fact that a 1GB video card just isn’t going to cut it going forward into 2016.

Now with the i7 and 970 I can feel confident about purchasing almost any games while being able to run it at max settings with a very high frame rate, basically guaranteed 60 FPS if I run a game at a tweaked high/ultra settings. It’s awesome, I’ve never actually experienced 60 FPS during gameplay with any game and I can definitely see why it is almost a must have for any serious PC gamer.

The SSD really does deliver in the way that everyone explains. It’s easily 15x faster than a normal HDD. I click the power button to my PC and it just turns on pretty much right in that instant, Windows takes seconds to boot up and then BAM I’m on my desktop. The YouTube videos comparing SSD load times to HDD load times are 100% real and I’m super happy that I decided to grab a SSD.

I installed Fallout 4 to the SSD and the game recommend ultra settings once I gave it a first time boot (that’s an awesome feeling by the way!) the load times were very noticeably faster than what I was used to and everything was running super smooth. PC games are definitely a lot more fun when the load times are cut in half compared to a HDD and when it is buttery smooth with the frame rate.

I also gave Rainbow Six: Siege a shot, I’m able to run it at a tweaked ultra setting for a very high frame rate. I also installed it onto the SSD and the load times are just amazing. I’m planning on basically adding any games that I play quite a bit and any multiplayer games as well on the SSD that way I can be sure that I can get to the necessary screen in a fast amount of time so that I’m ready for whatever comes next in the game.

All in all, this has really been my dream build for many years now and it feels amazing to finally be able to afford and put together a beast PC like this.

I plan on overclocking the GPU and CPU down the road though I will definitely be using the stock cooler for a few years yet, stock settings are more than enough for what I want in my games.

So, what do you think of my dream build? Do you think I spent too much?

Are you going to be putting together your dream build for Christmas?

33 thoughts on “My PC Build Dream, I’ve Been Waiting Years For This Day!”