A new Battle Royale type of game has released recently into early access called PlayerUnknown’s Battlegrounds and it has gained an insane amount of popularity.

You can check it out on Steam Charts right now to see just how many people have been playing, there are almost over 40,000 people playing at all times!

Your Heart Is Guaranteed To Race

This is my favorite part about this game. I didn’t have much experience in other “Battle Royale/Hunger Games” type of games before this unless you count The Culling as a title that is comparable but in my opinion, it isn’t.

The aspect of that when the game starts and you have this one life to live against 99 others on one map, one victor… it gets your heart racing any time that you get into a confrontation with another player.

You can queue up in solo, duo or a squad team of four to enter into the lobby. The lobby is basically all of the players on an island that are running around doing whatever until the game starts.

Once the game starts you are put on a plane with all of the other players. After a while you can choose a spot to jump out and skydive to a certain part of the map.

Once your parachute releases you can aim yourself towards where you are wanting to go. The aim at this part is to find yourself an area that isn’t too crowded where you can loot gear in peace that way you can protect yourself as you move forward.

Everything from assault rifles to motorcycle helmets to shotguns or pistols… You can find a bunch of types of gear and it’s up to you as to how you want to equip yourself and get the job done.

After getting all of the gear you have to stay within the barrier on the map and eliminate everyone else to become the last one or last team standing. Every single battle gets your heart racing!

A Development Team That Isn’t Focused On $$$

But the team behind the development of Battlegrounds is aimed at making sure that the game is a fun experience rather than focusing on monetizing the game through skins and what not.

It wouldn’t surprise me if they decided to add in buyable skins into the game and I wouldn’t mind if they did anyway.

It’s not like adding in cosmetics into the game affects how I’m going to be able to perform.

With that said, it’s nice to see a team that is focused on the important things such as optimization, content and community feedback rather than sitting back, not listening to anyone and only creating skins to rack in the cash flow like a lot of the bigger gaming companies are doing nowadays.

This game all started with someone that goes by the name PlayerUnknown. This guy made the Arma II and III Battle Royale mod, he was behind the development of H1Z1 King of the Kill. He decided to get a team together to make a game based on the mod and to make it great.

Right as it came out just a couple of weeks ago many streamers have already started streaming it and as I stated at the start of the post, there are tens of thousands of people playing.

I can see why this genre is so popular too, there has never been a game that has given me an adrenaline rush like it does. Throw a good development team on top of that and it’s pure gold.

From doing solos, meeting others and teaming up with friends to try and win – there are plenty of memories that have been made and that are in the making with this game.

My first match going in I had watched a few YouTube videos and streams of gameplay so I had a general idea of what to expect. Though actually playing is a much different feel than what you get out of videos.

When I landed from the sky dive I looted some houses that I was next to and managed to pick up an UMP sub machine gun, a shotgun and a helmet. Before that though, I ran into a guy that was unarmed like I was.

I managed to beat him up without taking any damage somehow and then I trekked along with the loot that I ended up finding. 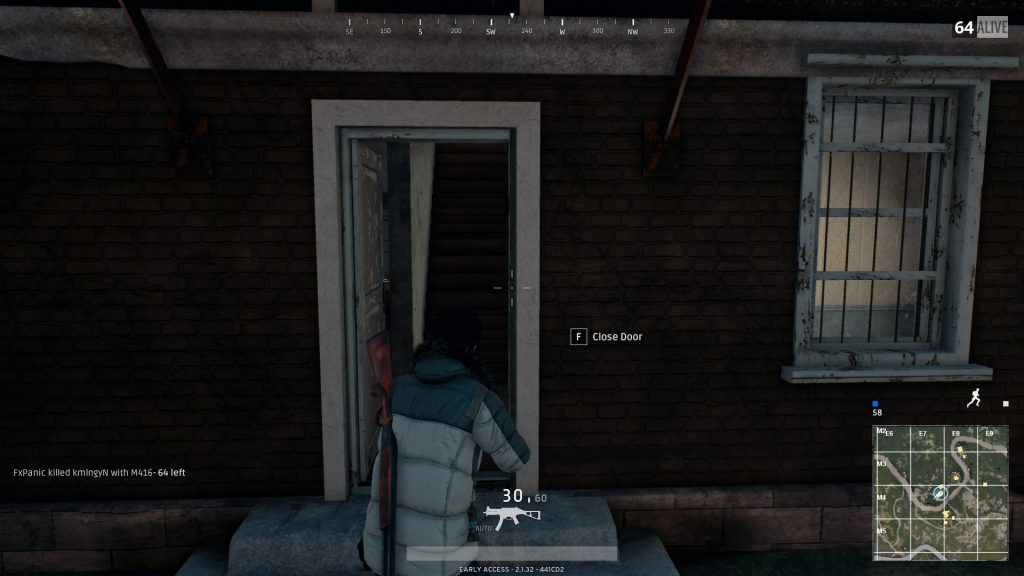 After getting enough loot to be able to defend myself I moved towards another building where I could hear someone moving around. I carefully entered in, crouching, that way I would try and make less noise.

After realizing that the noise was coming from above me I decided to run upstairs and to light up the guy that I ran into and I was able to get my first kill in my first game! 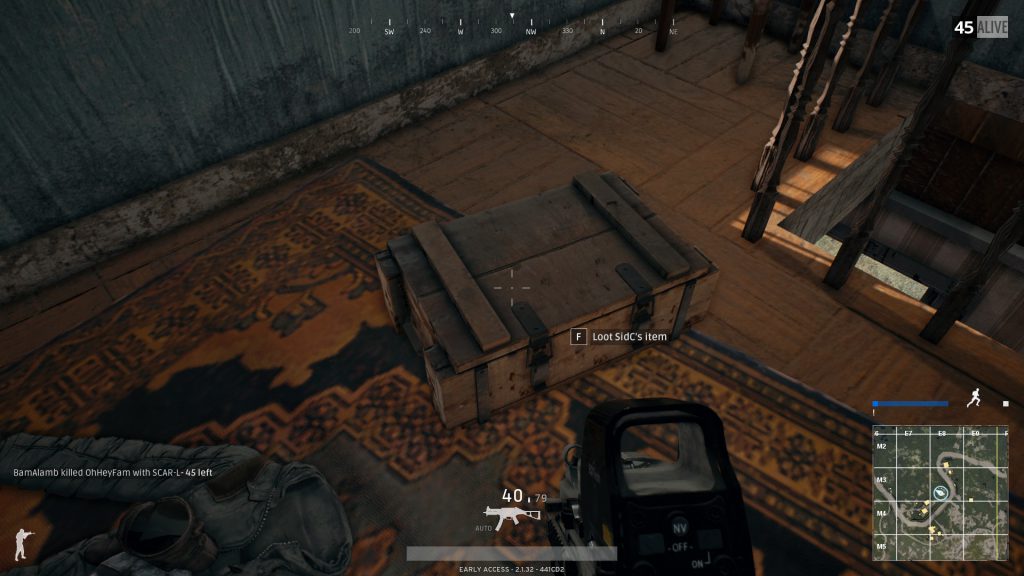 This was an absolute adrenaline rush. Rushing into the upstairs area to find this dude… knowing that I’ve got this one life to live… It was intense. Every part of this game is that intense.

After looting his gear which granted me a holographic sight, a medkit and other goodies I decided to move on to another town.

This is where I learned that cover is everything… You’ve got to make sure that you’re behind some sort of cover as you’re moving along or at the very least a vehicle of sorts. You also need to keep an eye out for where the force field is at…

I ended up getting sniped by someone and that is when I lost the first match. Though, I didn’t do too bad from getting a couple of kills my first time around! 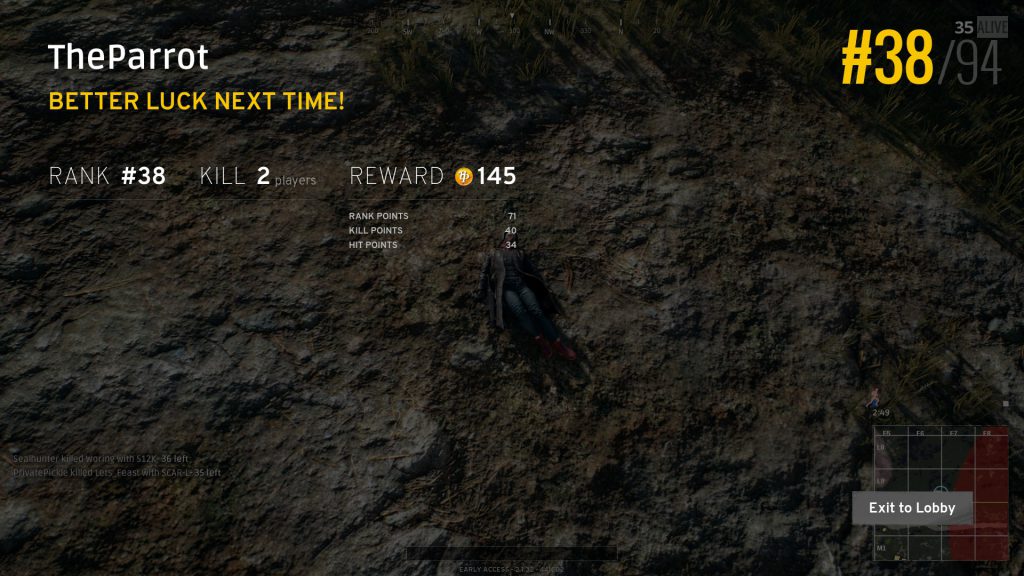 After you die you receive an amount of credits based on how long you survived and how many kills you got. You can use these credits to open up cosmetic crates which have all sorts of different customization options for your character.

My next few matches I had died from not watching where the force field was at and from other players. Other matches I was able to run someone over with a vehicle and another match I actually ended up being in the top 10!

That’s another great part about this game – how the RNG works, you could end up being one of the last few alive or you could get killed right off the bat. Sure, skill will give you some advantages but absolutely anyone can win at this with enough tries.

Here are some screen shots that I managed to get while I was out and about on the Battlegrounds. The graphics are extremely good!

However, if you’re playing on a mid level rig I would suggest lowering the graphics settings until they further optimize the game. 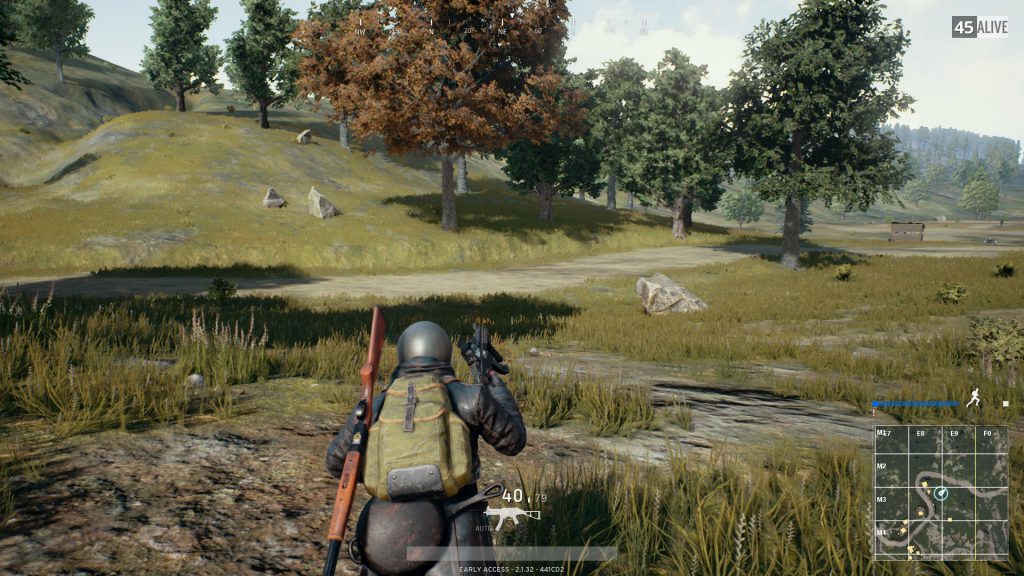 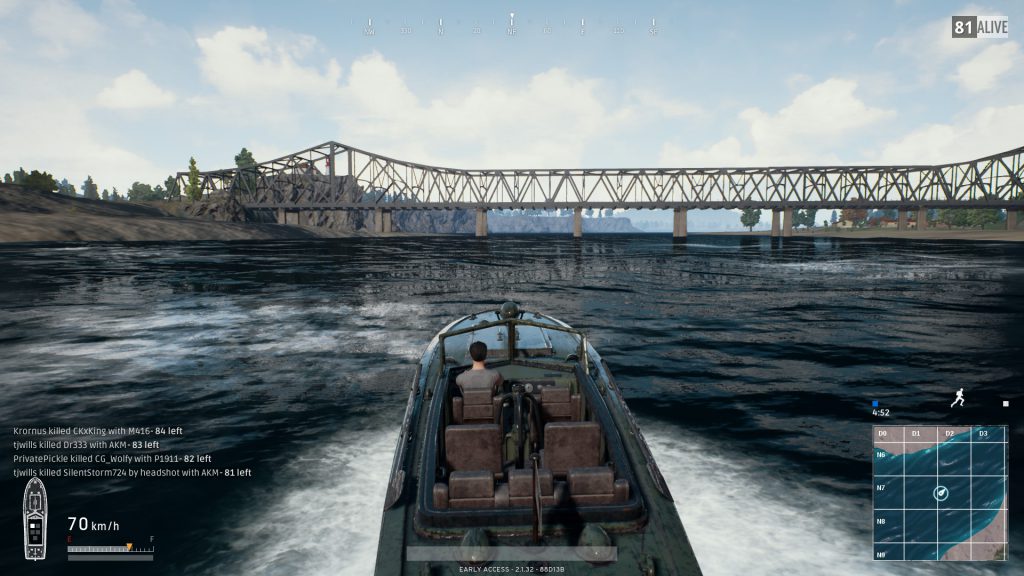 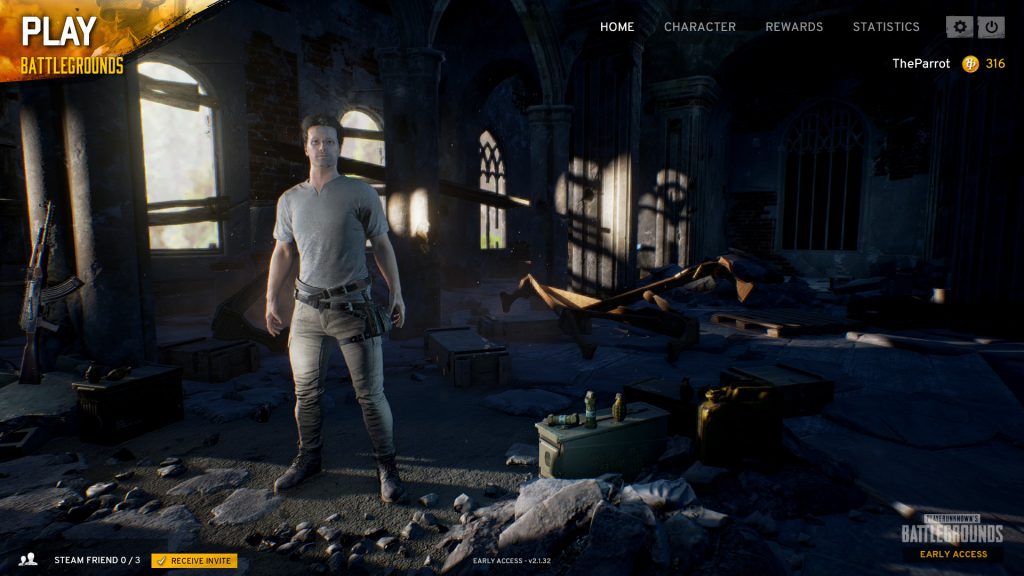 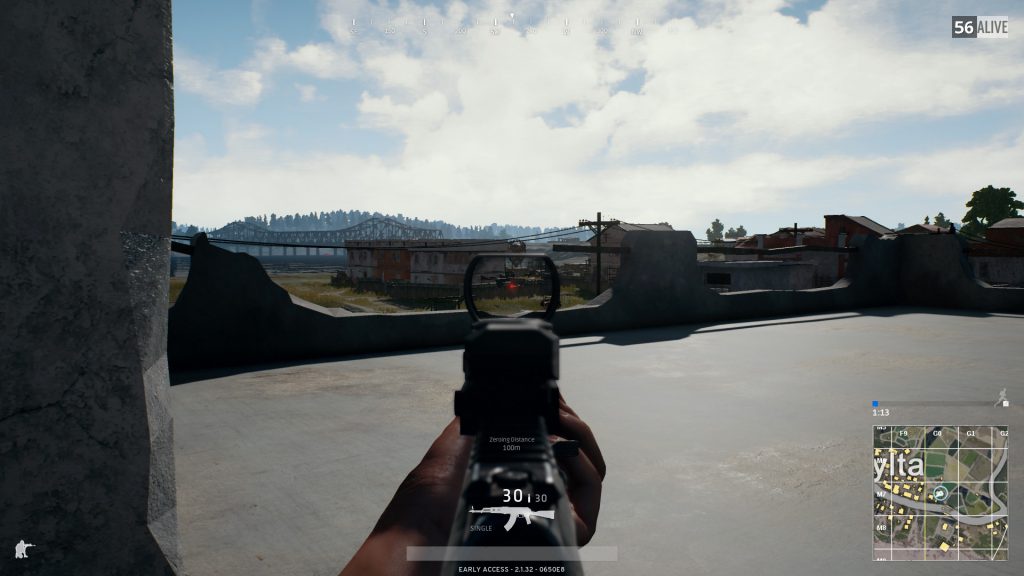 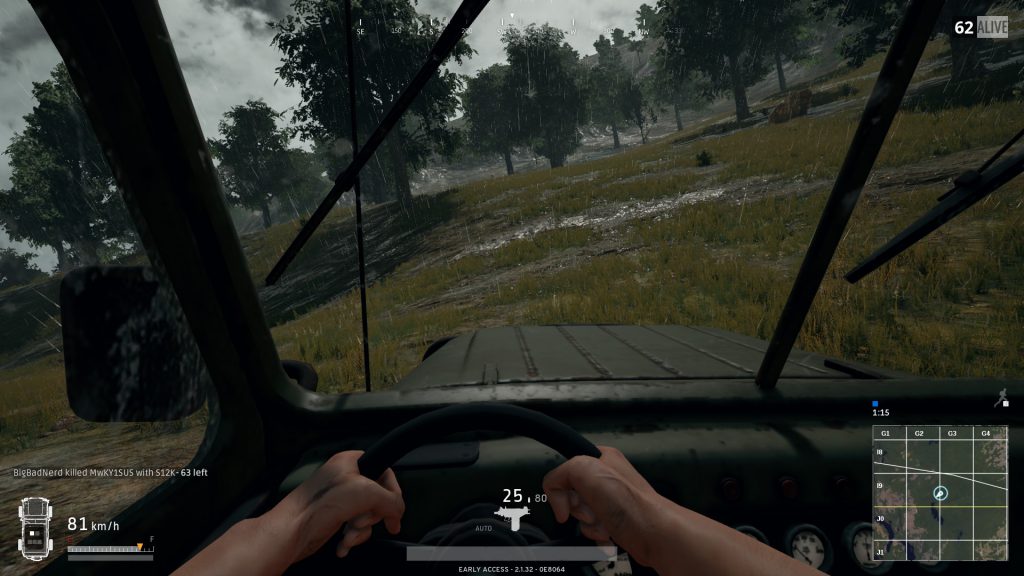 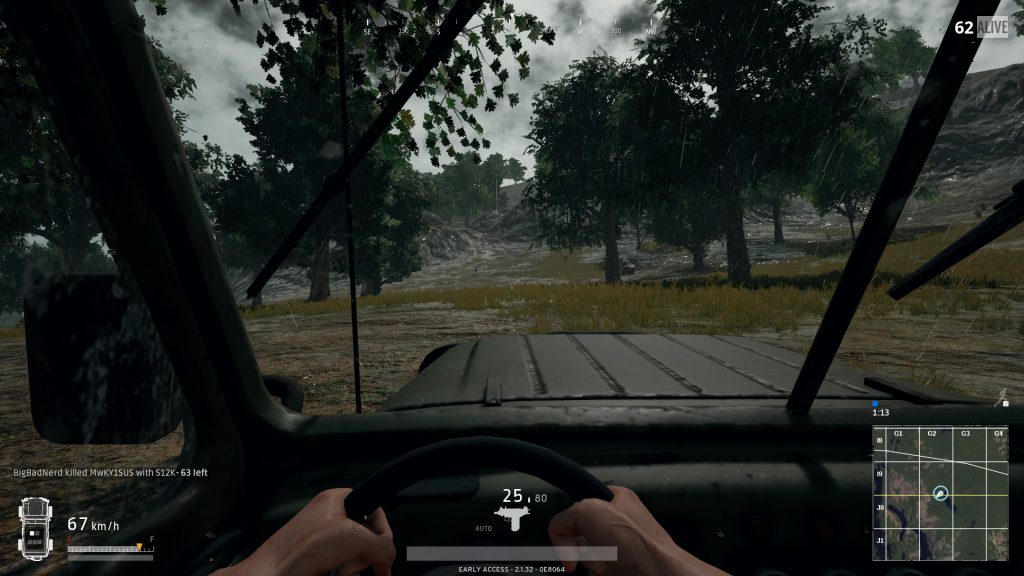 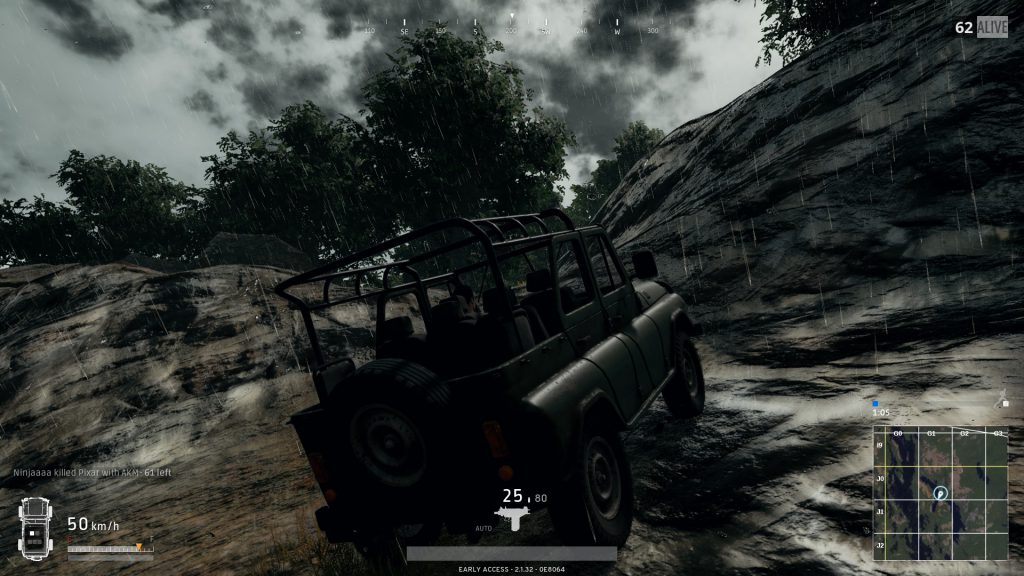 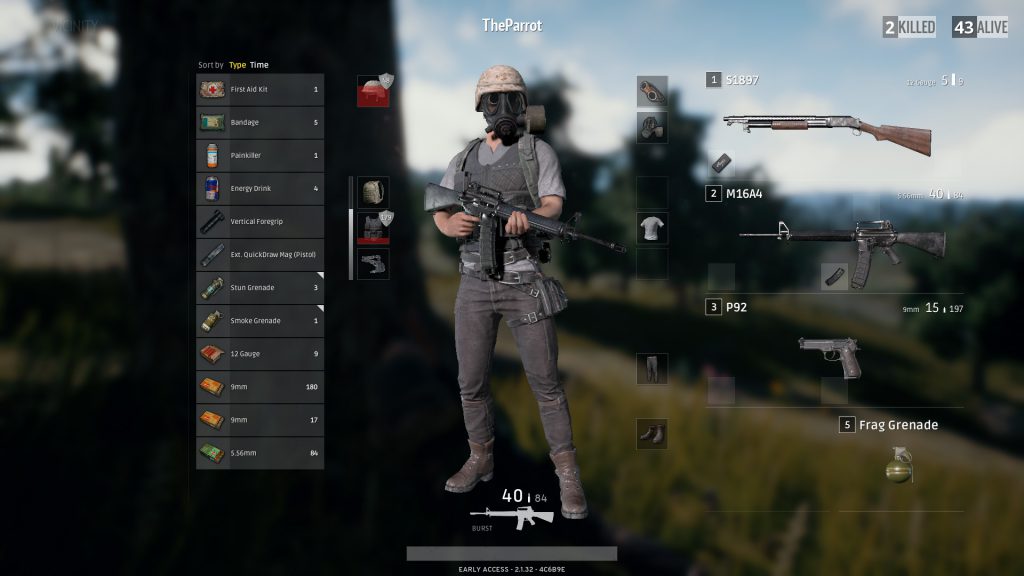 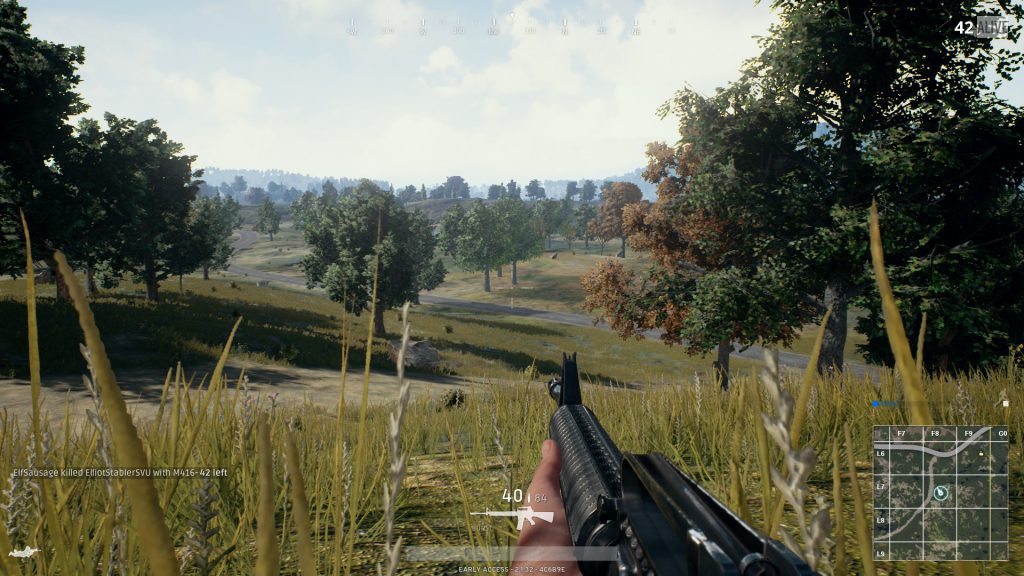 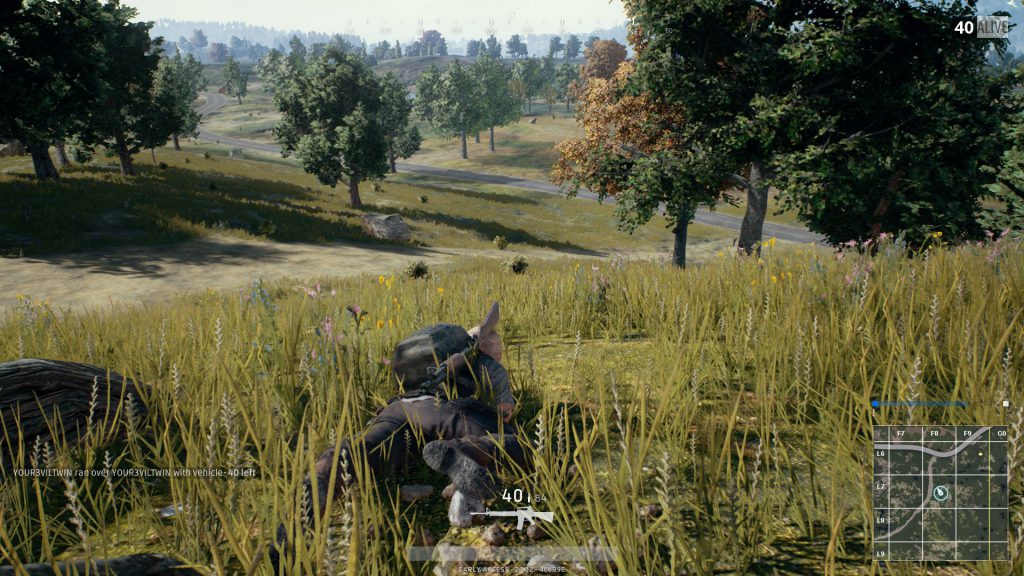 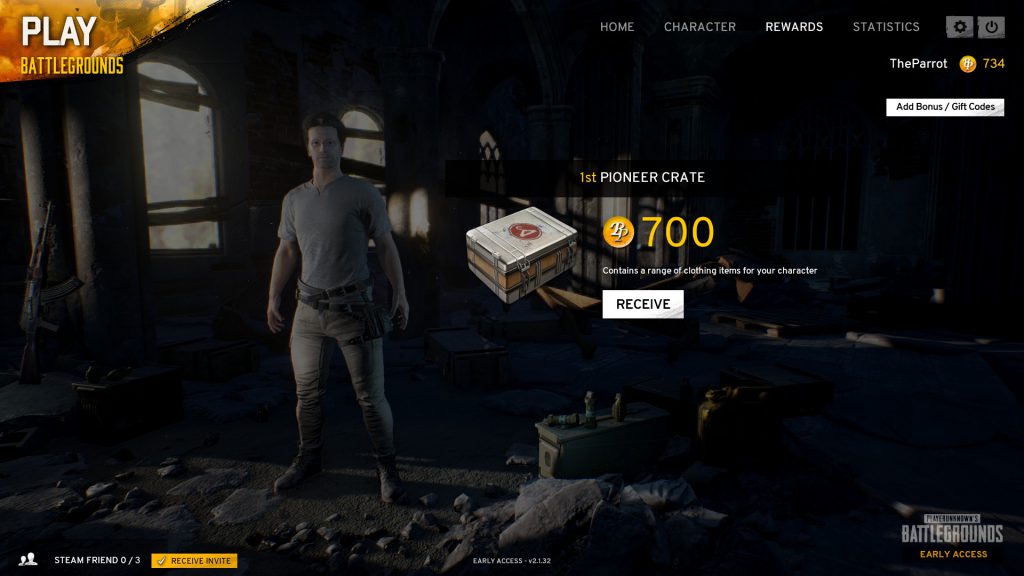 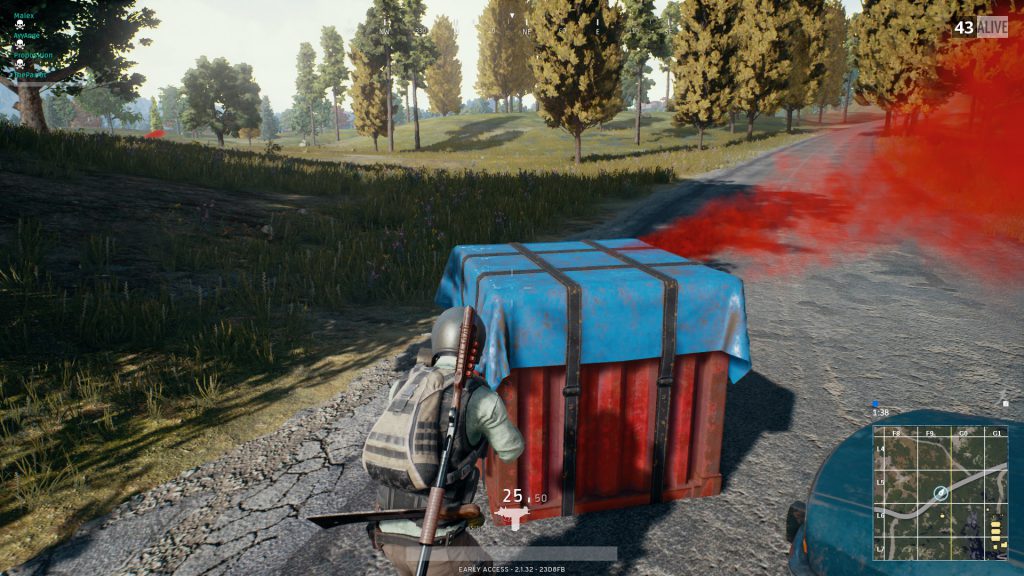 Like I said, the game is absolutely gorgeous for what it’s doing. There are 100 players on the map at one time, it would have made sense if the graphics were bad but they aren’t.

Again, many people are having issues with the graphics on the higher settings, including myself. Randomly the game will jump frames while I’m loading in a new area but it doesn’t last so long to where it isn’t playable for me.

The developers have come out and stated the steps that they are taking to get the game more optimized and for that I, and the other players, are very grateful for!

Should You Pick It Up?

If you’re into the “Hunger Games” type of genre then this is the game to get, hands down. It has more weapons and polish than other games that are like it and this is only the beginning.

I’m mostly excited to see where this game goes in the months ahead. From optimization, more weapons and cosmetics… there is a lot that they could still add into the game!

So, have you played PlayerUnknown’s Battlegrounds quite yet?

Is this your type of game?

2 thoughts on “PlayerUnknown’s Battlegrounds Gets Your Heart Racing”