There aren’t a crazy amount of VR titles on the market right now but a free to play title called Rec Room shows what a community game would be like.

In Rec Room you create your own cartoony avatar and communicate, play and interact with other players from around the world. It’s an experience like none other which is why I want to take the time to talk about my experiences with the game so far! 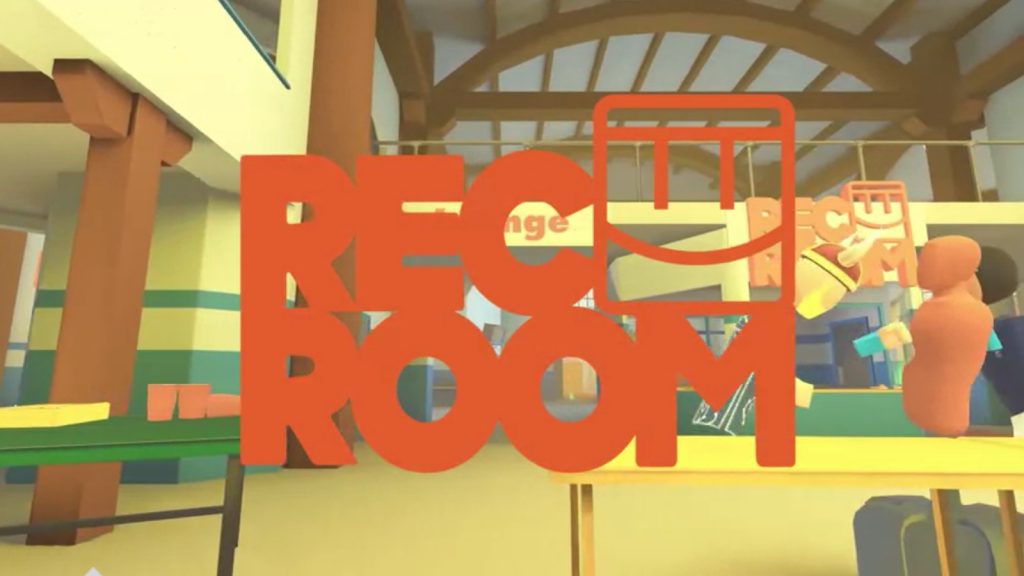 Booting up Rec Room for the first time – I wasn’t really expecting a whole lot.

It’s a free game and from the screen shots and videos I saw on Steam I didn’t think it’d be something that I’d get into. I also heard a lot about it on the Vive subreddit as well as other places online.

Boy was I wrong.

Rec Room is the perfect example of how future VR titles can grasp the ideal of bringing a community of people together to simply socialize and have fun!

It’s such a crazy experience looking over at someone in a virtual world and talking to them. When you talk, your avatar’s lips actually move indicating that you’re speaking.

The whole experience of hanging out in the “locker room” area with random people, doing whatever we felt like doing while also just talking about random stuff… it sheds light on the possibilities of multiplayer VR titles.

There is something about being able to shake someone’s hand, give them a knuckle touch or giving high fives… it really gives this sense of presence that you’d almost receive in real life.

Social VR gaming is going to be a popular niche going forward into the VR industry. There is no doubt in my mind that these types of games are going to be up there with player count.

There are plenty of mini-games to play with the people you meet in the game or with friends that might be playing with you. There is paintball, 3D charades, dodgeball and others as well.

Paintball is by far my personal favorite! It’s basically “Call of Duty” type gameplay if you will. There are currently two game modes. 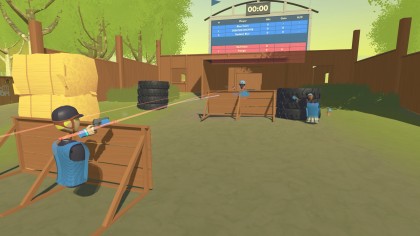 One mode is basically a team deathmatch called team battle. First team to 50 hits on the other team or the team with the most hits at the end of the time limit wins.

The other game mode is capture the flag. There are two spawn points and at each spawn point there is a flag that needs to be carried back over to your team’s base to get a point.

First to 3 captures or the team with the most captures at the end of the time limit wins.

Every time you spawn you start with a regular pistol paintball gun. Throughout each map there are also shotguns and sniper rifles to use as well.

You move around by teleporting around with a cool down between each time you can teleport somewhere else. This mechanic actually works really well for what they’re trying to accomplish and it has been an absolute blast every single time I’ve played!

3D charades was very interesting first going into it.

You gather a group of people on a stage and each person has their own podium. Everyone is on a team and each player takes a turn to grab a random card and then they have to try to draw in 3D whatever it is that they drew.

If any one of the players shouts out the right answer there is a big, green “Got It!” button that the drawer presses which gives a point and it’s on to the next player. The whole point is to gather as many points as you can within the time limit!

Dodgeball brought back high school memories in a way. Same rules applied – there are a few balls at the center line of the court. Each time needs to rush to get to the balls or to catch/dodge balls thrown at them to be able to get people on the other team out.

Catching balls was kind of a challenge for me, I’m not sure if it was the way that I was attempting to catch them or if I simply wasn’t able to do it but I did indeed get a good amount of players out once I did get a handle on a ball!

There were a few other mini-games such as disc golf or something to do with soccer but I have yet to try them out yet, most of my time has been spent playing the paintball mini-game!

Here are some screen shots I was able to capture while playing around in Rec Room. I was at first put off by the graphics of the game but actually being in the game proved that graphics don’t matter at all when it comes to VR specifically. 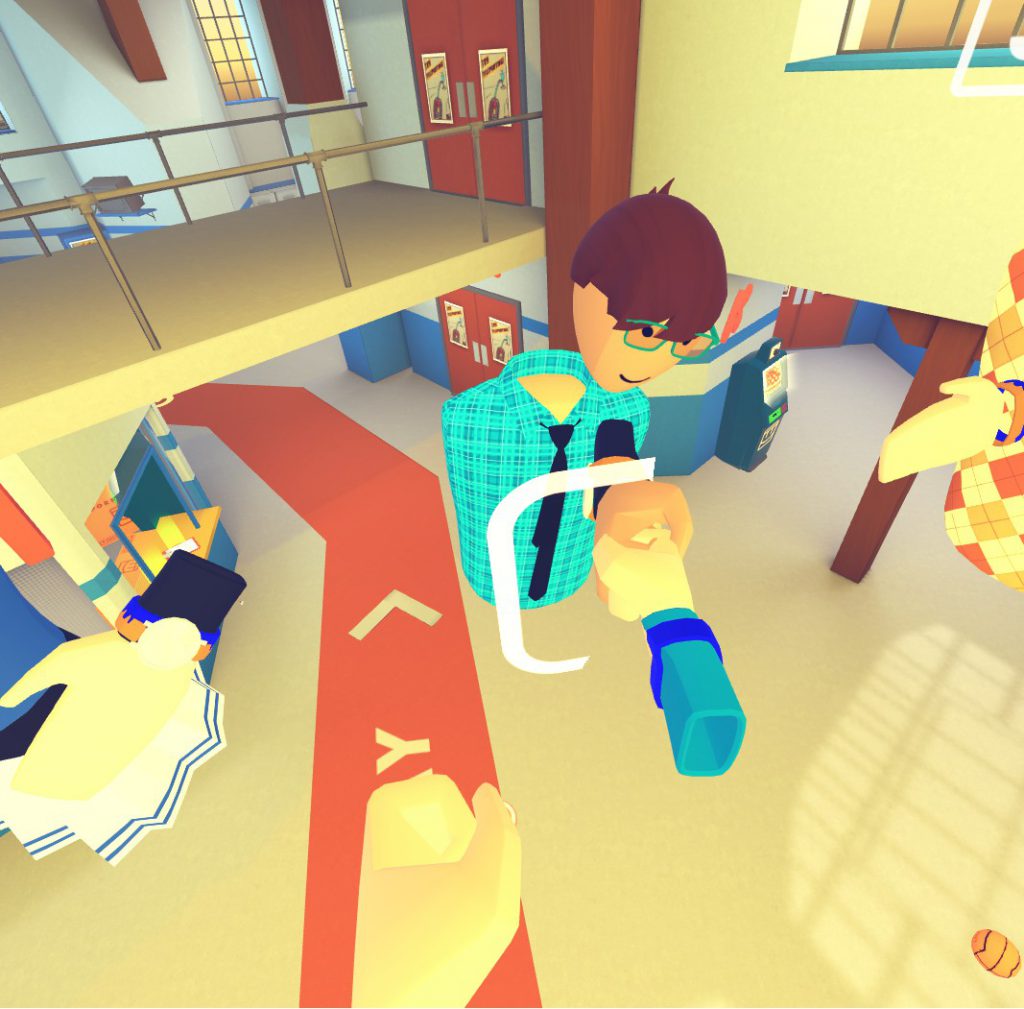 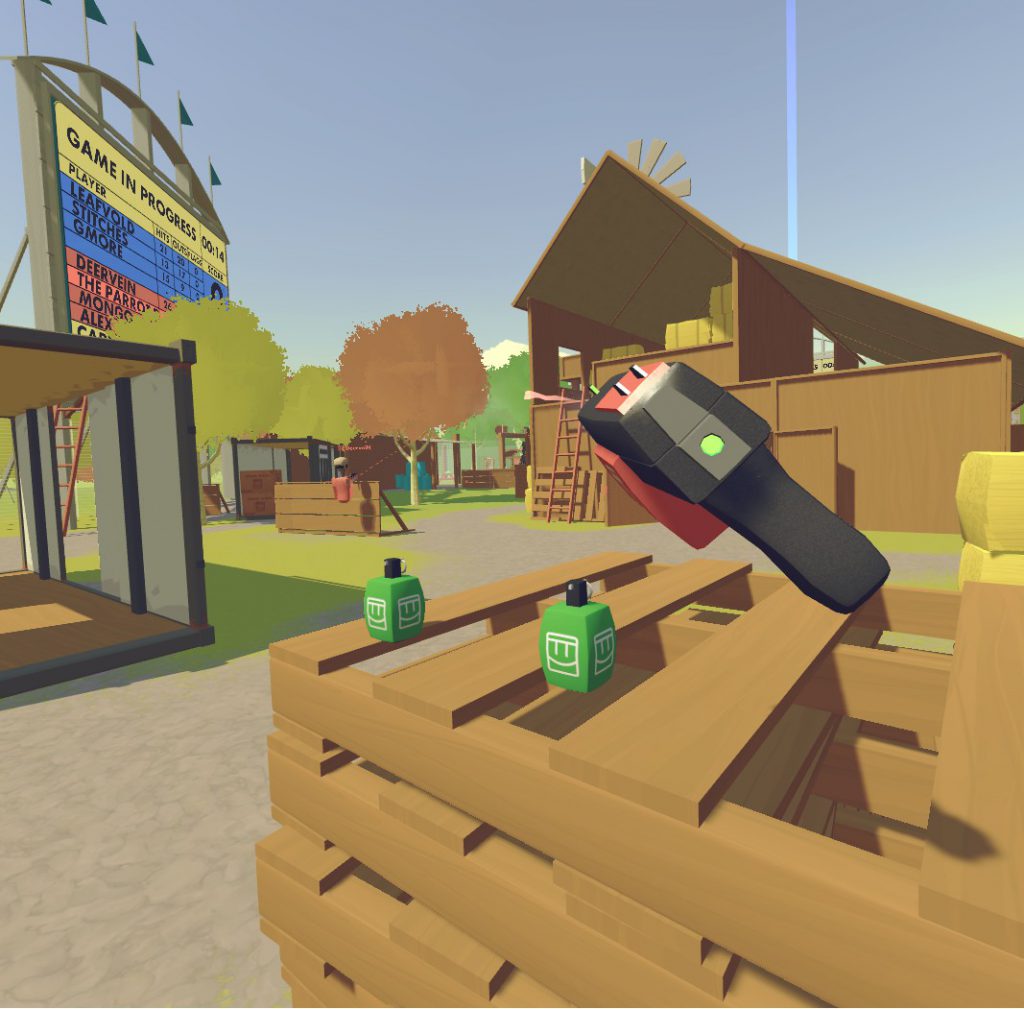 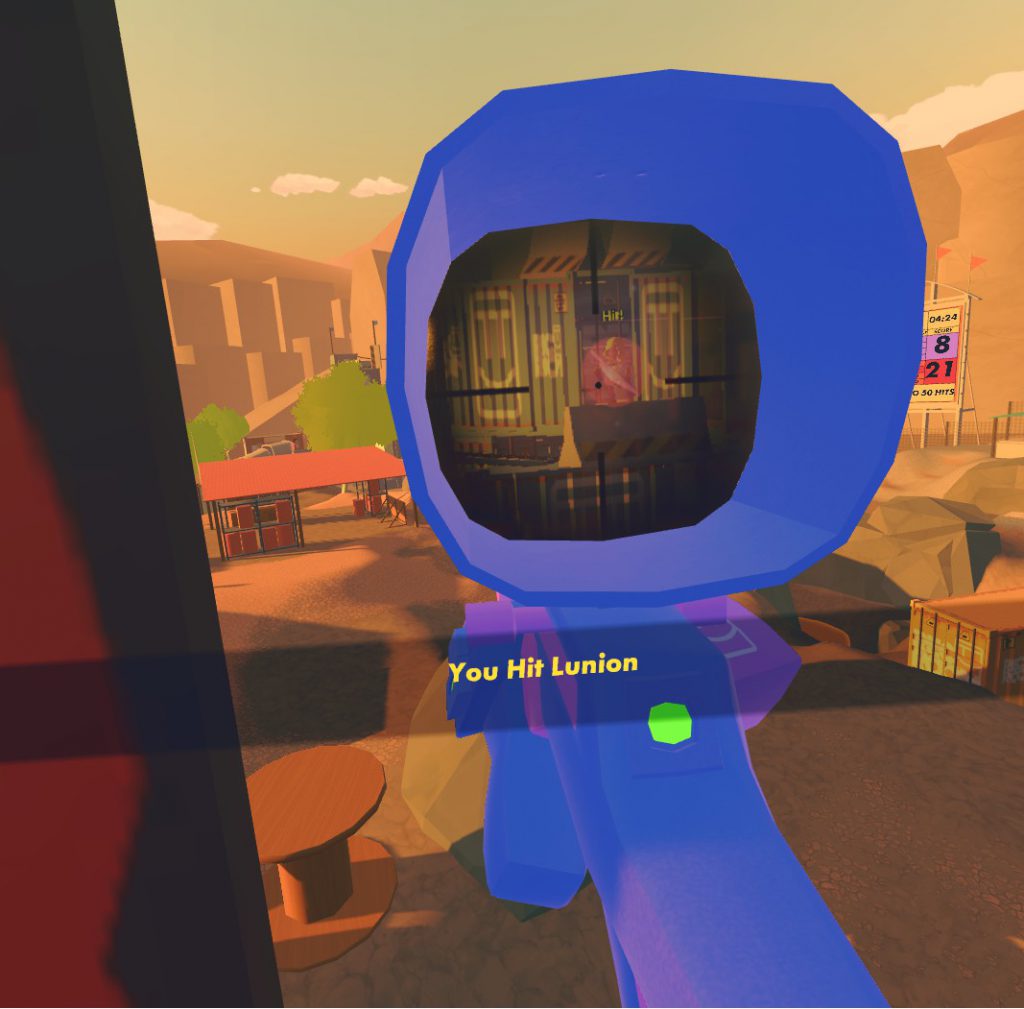 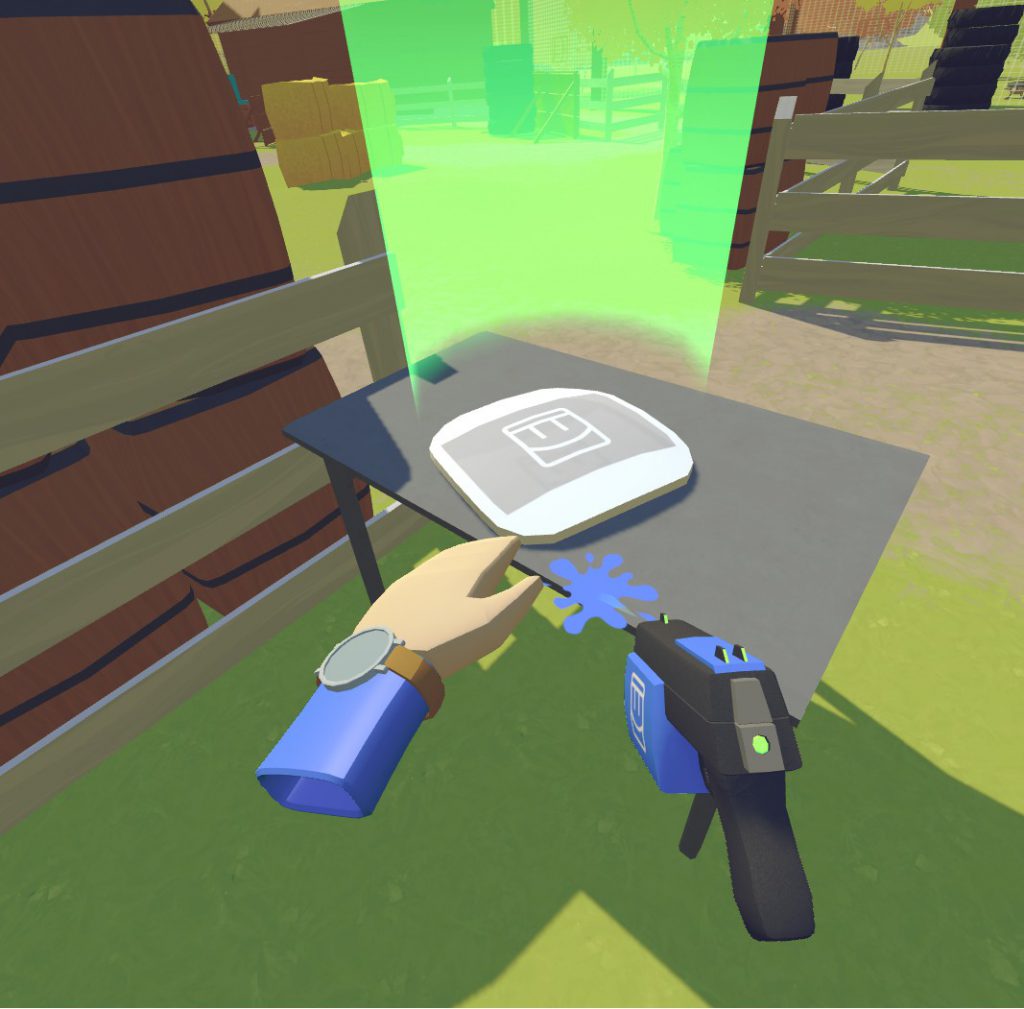 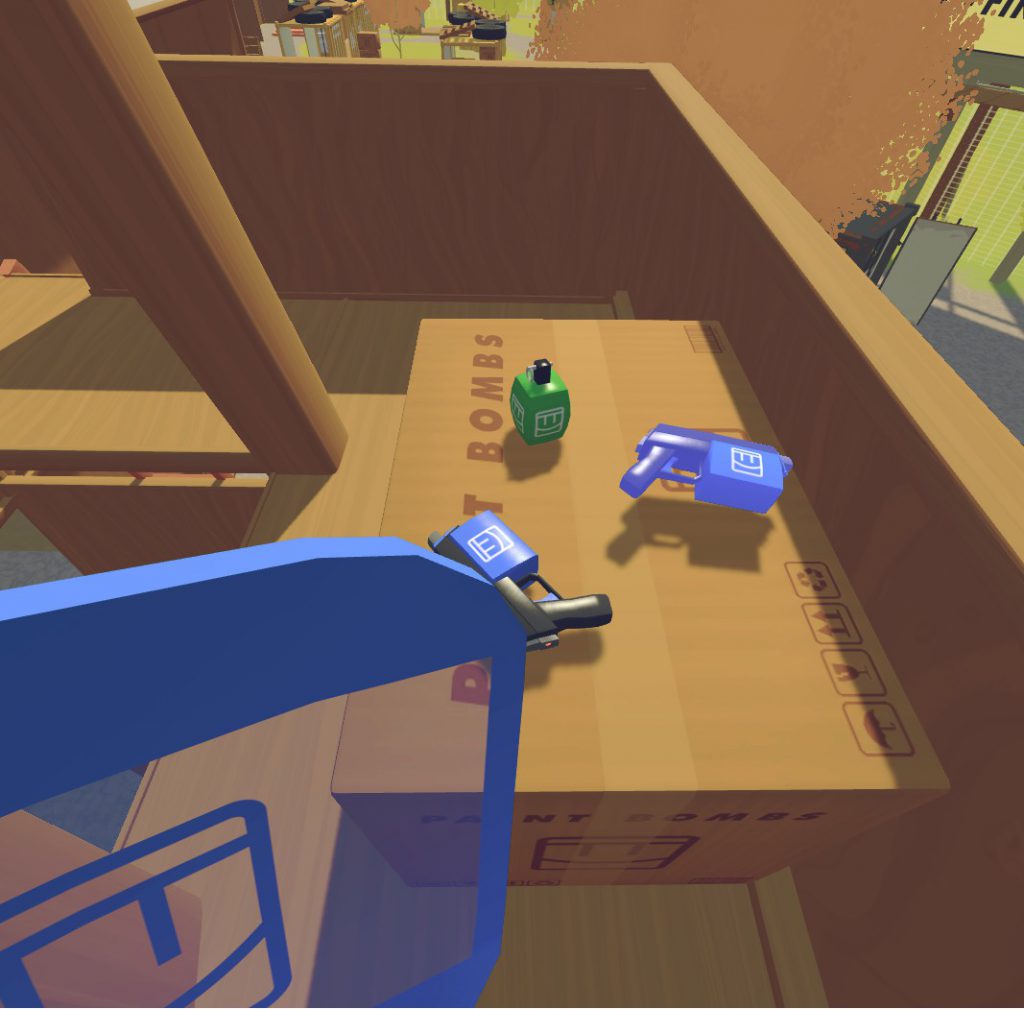 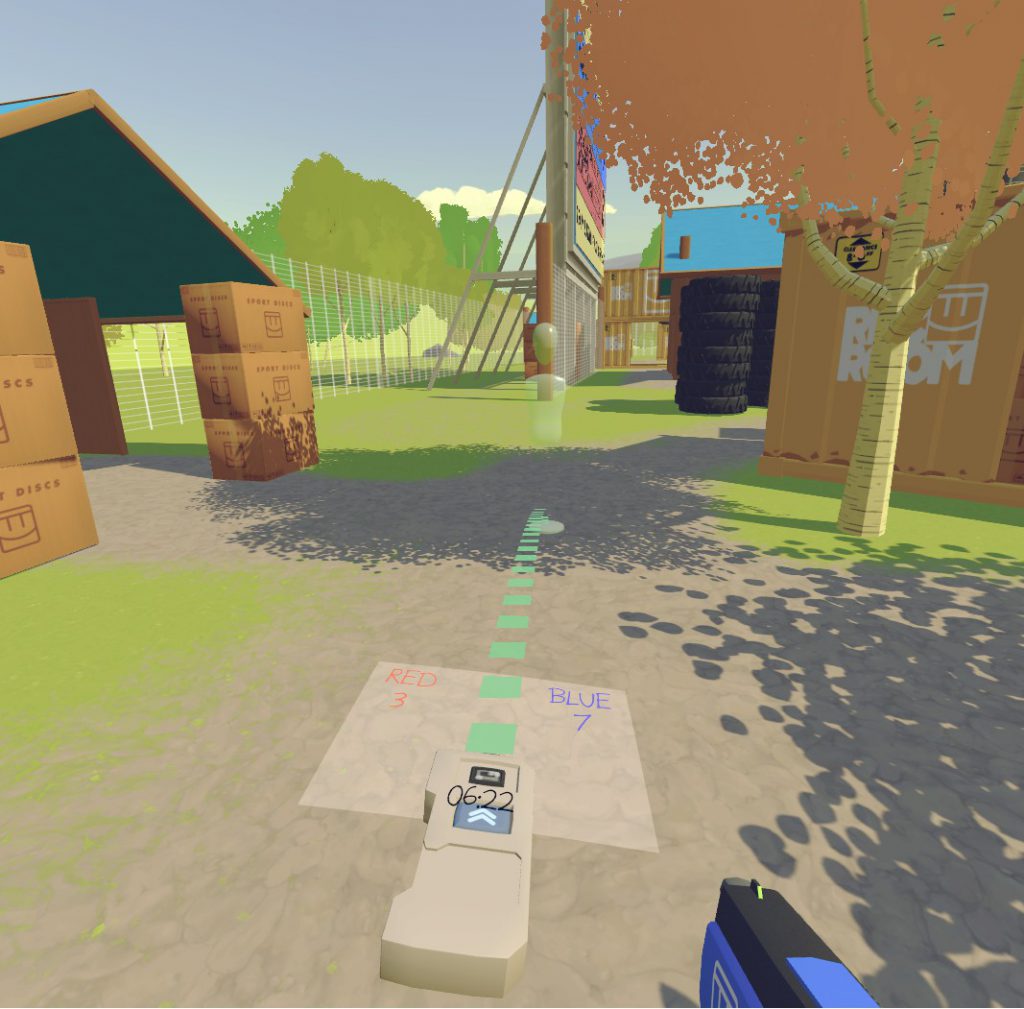 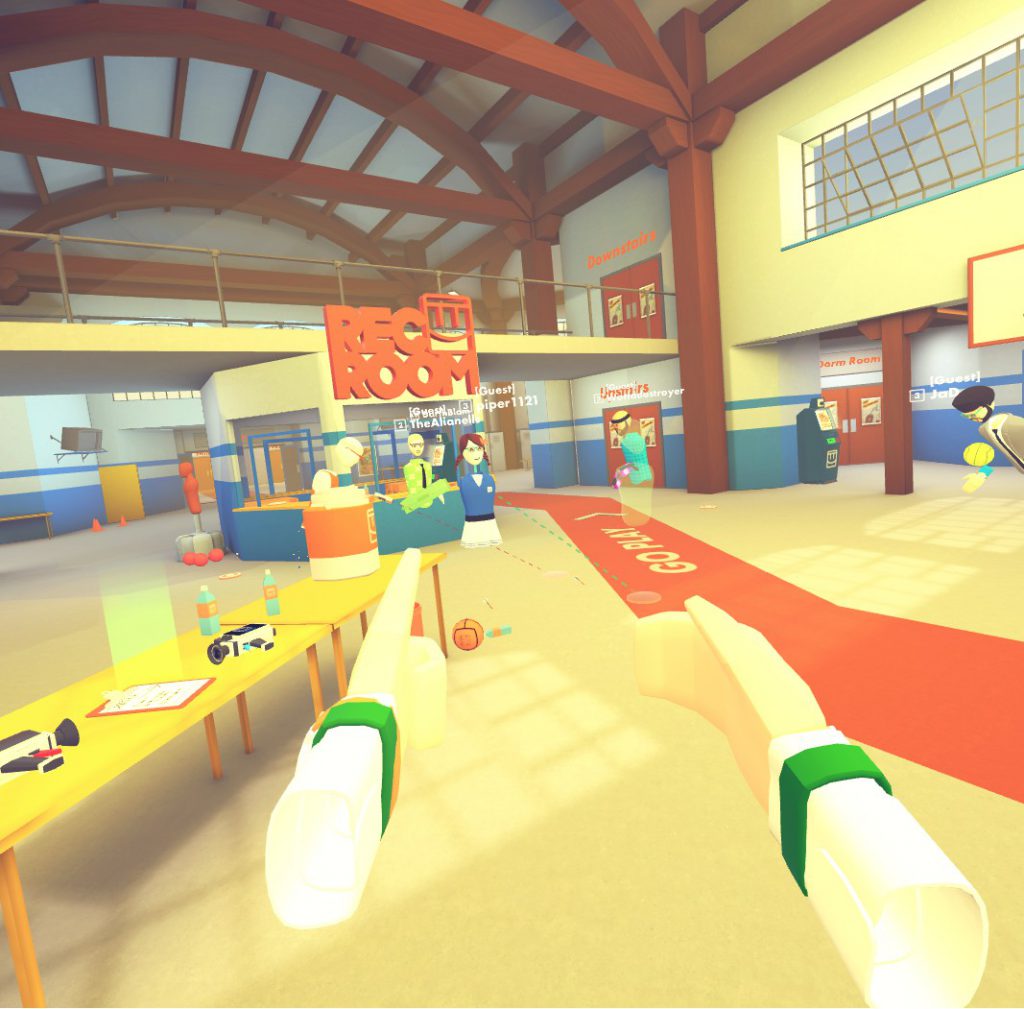 As you can see, there are a ton of players always active in the lobby area and within the different mini-games. It has been a lot of fun meeting new people and simply having a good time with everyone!

All in all, Rec Room really shows the possibilities of what it means to have a social VR game.

It’s something that isn’t fully understood until you experience it yourself to be honest. It’s an experience like none other shaking hands and meeting like-minded people in a virtual world.

So, do you also see social VR gaming taking off in the years ahead?

Do you think Rec Room has a lot of longevity in the years ahead if it kept updating and kept moving forward with the community?