We’ve gone over other SkyTech PCs in the past and they’ve held their own in terms for longevity and power per dollar spent. We’ll go over everything there is to know about the Shiva gaming PC to see if it is a rig worthy for gaming performance in 2022 and beyond. 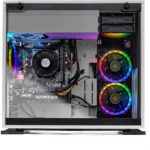 16 thoughts on “SkyTech Shiva Gaming Computer Review, A Worthy Rig For 2022 And Beyond?”