My most played game right now is Brawlhalla. With 339 hours and counting into the game – there are so many reasons as to why I absolutely love it!

I’ve written about Brawlhalla before but I figured that since I’ve been playing it non-stop before and since then that I should make a post all about as to why I really love it so much.

It’s not that I don’t like paying for games because I have plenty of games that required me to buy them but I big reason why I love Brawlhalla is because it is a true free to play game.

This means you don’t have to spend anything at all and you can still do just as well as anyone else – that’s why I call it a true free to play game.

The only thing you can pay for in-game is for cosmetics and if I have to be honest, I’ve spent the most money in Brawlhalla than I have in any other game that I’ve played – free to play or not.

I pay for cosmetics not only because the skins for different characters/weapons are extremely well done, I want to support the crap out of this game! I’m a huge fan of Super Smash Brothers and Brawlhalla has similar mechanics to it except with its own little twists that make it unique.

Also, free to play games always have people playing. There are currently thousands of active players playing at all times according to Steam Charts and so I never have a hard time finding a match.

There’s nothing in-game that you can pay for that gives you the competitive edge, each character is bought with in-game gold and gold is given to you at the end of every match – even if you’re playing in custom matches.

Free to play games can either be amazing or a complete disaster – Brawlhalla is one of those free gems that deserve being played. Especially if you’re a fan of Super Smash Brothers.

There’s is an actual eSports atmosphere with Brawlhalla and there’s real money to be made for those that are very good at it. Seriously, they have tournaments all the time where players are winning $$$ on matches!

Right here is a link to the overall earnings summary of Brawlhalla. Over $15,000 has been paid out to different players in all sorts of different tournaments.

I haven’t won any money in a tournament before but I’ve been apart of a smaller tournament and actually got into the semi-finals. Being on a live stream and playing as good as you can in an actual tournament was a lot of fun! The adrenaline can get pretty crazy.

But it’s not just tournaments of what I’m getting at here. There’s also a ranked section of Brawlhalla. You can play in 1v1’s or 2v2’s and as you get better you’ll progress into higher ranks.

The ranking system starts at tin then it goes to bronze, silver, gold, platinum and then diamond. Each rank has 5 tiers in it that you have to get through in order to get to the next rank.

As you play matches you win or lose your ELO rating which affects which rank/tier you are in. Right now I am at the platinum rank in the 3rd tier and for a while I’ve been sort of stuck there.

Playing in the ranked modes is very fun and it’s awesome to see yourself progress higher and higher into the ranks. Once you get into the diamond rank then you’re able to compare yourself with the top 1% of Brawlhalla players. That’s my main goal!

2v2’s is also very fun to play with a friend. There’s team damage but if you communicate with your partner and make sure not to destroy each other then you can do pretty well in the ranked 2v2 ladder.

Ranked allows you to not only get paired with people around your skill level but it also lets you see how good you are depending on which ranks you’re able to get to!

Reason #3: The Community Is Awesome

A community is the back bone to any game – especially when it’s a PC game. 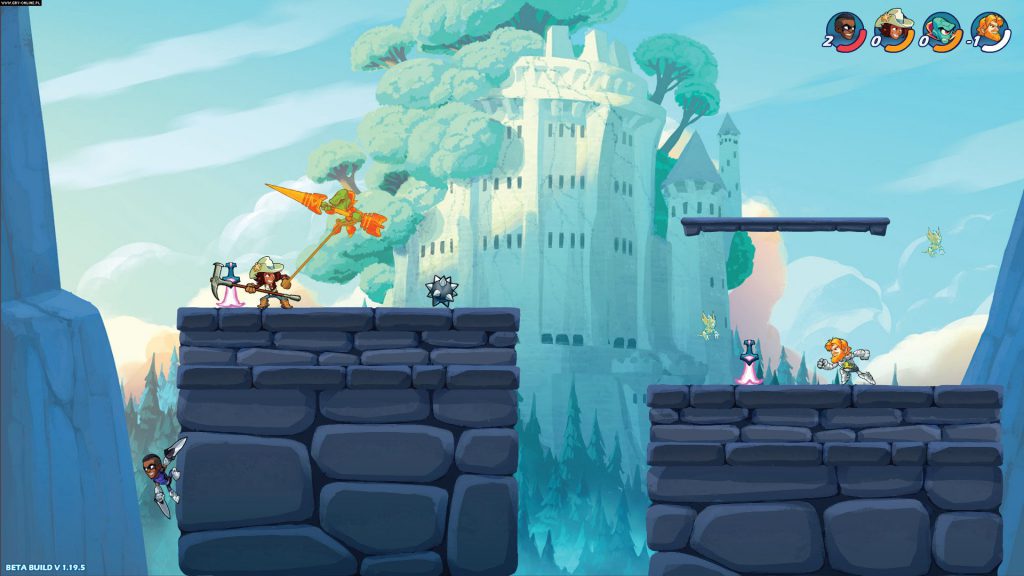 Brawlhalla has an awesome community of players. As with any competitive game, you’ll get your special few who get very angry and say stupid things to you after a match is over but for the most part – the community isn’t toxic at all.

I mostly love the Brawlhalla sub Reddit because that’s where you’ll find awesome plays, cool fan art, news about the game from the devs and some funny stuff as well.

It’s also possible to find people to play with there but I’ve also found that finding people the play with in-game is also a good way to connect.

I’ve actually recently been playing with a group of players that are very active with Brawlhalla. I went against a dude in t he 1v1 ranked ladder twice and beat him both times – after the 2nd game I told him that we could make a good team together and since then we’ve been climbing the 2v2 ranked ladder together.

They also had their own Discord server and it has been a blast talking and gaming with everyone. We sometimes even do custom free for all matches with over 5 players – that gets pretty hectic but there have been so many fun memories so far!

The community of any game is important and Brawlhalla has had the most fun community that I’ve been apart of in any game. It’s a big reason as to why I’ve put over 300 hours of my life into it.

You At Least Need To Try It

It’s a free to play game, it’s easy to understand how it works and it’s a lot of fun – especially if you like Super Smash Brothers!

I’ve put so many hours into this game for the sheer fact that it’s a ton of fun. I never really get bored of playing – especially when I’m playing with friends!

They also have the game optimized for couch play so you can plug in more than one controller and play with your friends locally and that has been a pretty awesome experience for me as well.

So, are you going to be trying out Brawlhalla?

Or have you already been playing it?