Not every PC build on the planet is going to be able to run everything at maximum graphics settings. It’s good to know what to tweak to get good frames!

I’d like to share the settings that I like to tweak a bit to get better performance without changing the overall look of the game so much. If you know what settings don’t change a whole lot then you can get optimal frames per second while having the game still look awesome!

What Should Be The First Adjustment(s)?

Most people today that are playing on PC are gaming at 1080p. This is important because a graphics settings known as Antialiasing or AA is something that should be tweaked right away for better frames.

Skyrim is a good example for this because all of you – at least hopefully all of you that own your own gaming PC – have tried out Skyrim on the PC since it has all of the mods and what not, right?

Well if you’re noticing a dip in frames, I recommend lowering your AA down to off if you’re gaming at 1080p. Unless you’re super nit picky about what the edges of objects and other things in game look like, you’re really not going to notice a whole lot with this setting off.

At a HD resolution like 1080p – it’s hardly noticeable. AA basically smooths out the outer edges of close as well as far away objects in game. Below is an image showing the difference in Skyrim. 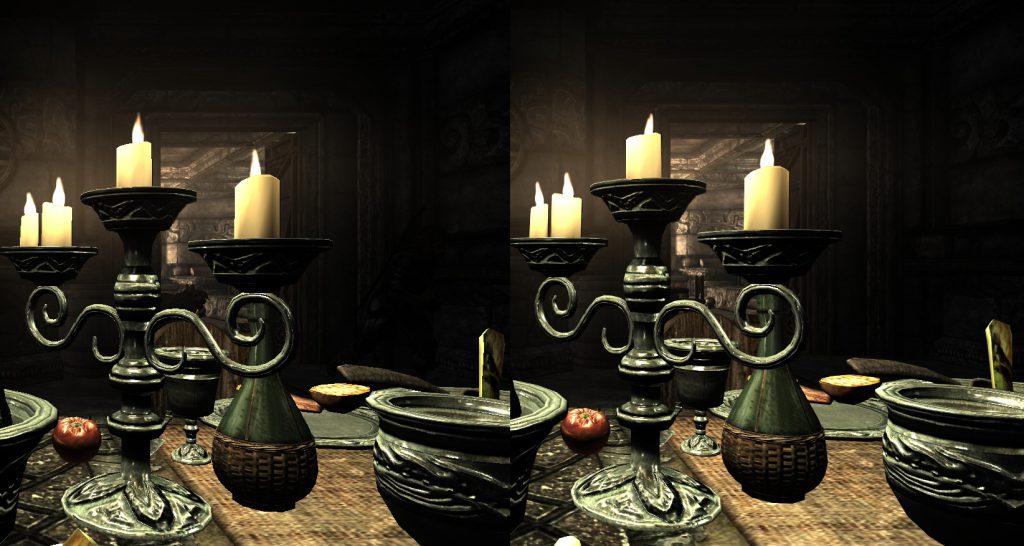 Can you notice the differences?

It’s easiest to tell on the edges of the candles.

Almost every AAA title released on PC has a Antialiasing graphics option and by lowering/turning it off – you’re going to get better frames. Sometimes even 10+ more than having it on all the way!

Anisotropic filtering is a bit more noticeable, but it should be another setting that you consider tweaking a bit for a better frame rate.

This setting affects the way the textures render as you look farther away from where you’re standing in a game. It filters far away textures to make your PC run the game faster.

If you have this setting all the way off then you’re going to notice that the textures don’t have as much “depth” to them. This is another setting that has different levels so you can keep tweaking it until the game looks good yet runs well enough for your liking.

Below is a picture comparing some textures in Skyrim with Anisotropic filtering turned off and at the highest setting.

It’s a lot more noticeable than the AA candles comparison above. 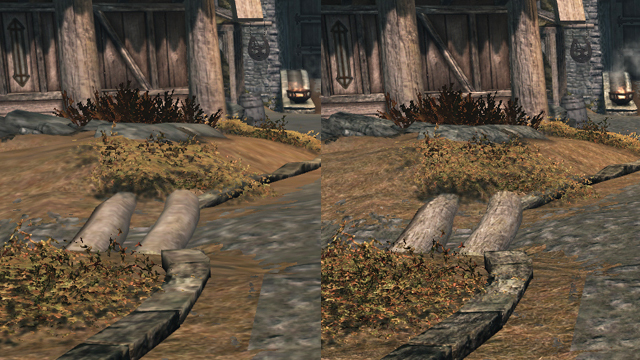 It shouldn’t be too hard to see that the left side is with it turned off and the right side has it on. Definitely noticeable on the ground textures but it doesn’t seem as noticeable on other textures.

Again, something to tweak to your liking, but the lower you have it the better your frames are going to be.

Do You Absolutely NEED 60 FPS?

The short answer – yeah, you do. If you’re able to have it and if you really want to strive for it.

But for some, high quality textures are more important than getting 60 FPS.

If you hop on some sub reddit forums for PC gaming you’re going to run into people saying “PC MASTER RACE, 60 FPS FOR LIFE” and although yeah that’s true – not everyone is only out for 60 FPS.

I’ve got to say, my favorite part about PC gaming is the freedom that it brings to the table. 2nd favorite part would be being able to have higher frames per second followed by higher quality textures.

But if you compare most games from the PS4 to a higher tier gaming PC – when it comes down to the textures – there isn’t a super crazy difference.

Yes, with some games, you’re going to totally notice it. But the PS4 is also capable of having some higher quality textures.

60 frames per second and beyond is where PC gaming really shines for most people. There’s something about having a buttery smooth gameplay experience… it just makes playing the game that much more fun.

The Xbox One runs 90% of its games at 30 FPS and then when it comes to smaller, less demanding games then it can run at higher frame rates. There are definitely more games capable of running at 60 FPS on the PS4 than the Xbox One.

If you ask anyone that owns a console and a gaming PC if the difference is significant – they’ll tell you yes for sure.

Below is a short GIF that I think really shows the difference between 30 FPS and 60 FPS. Watch one side first, then watch the other to really be able to tell the difference.

As you can see, the right side is way smoother than the left side. From that urn shattering to even the movement of the camera and the animations on the character…

60 FPS is really awesome and I do agree that the overall gameplay experience is enhanced when you’re able to achieve 60 FPS.

Another setting that you should be on the look out for is called V sync.

For example, when you look around in a first person shooter, you’ll notice tears within the screen as you look around. When I first started gaming on the PC I didn’t notice it but once it’s pointed out, it can’t be unseen…

For some, screen tear in-game doesn’t bother them. For me, I can’t stand it. However, if you turn off V sync, you’re guaranteed a small boost of FPS.

There’s a lot going on when it comes to why V sync affects the frame rate of a game. If you’re interested in how exactly it does affect it and how V sync works to bring down screen tearing then I encourage you to look up some videos on it, there’s plenty of content on YouTube on it.

In some cases, the textures might be the most important part.

My current build is able to run most games maxed out and it has been a “dream” build of mine ever since I put together my first build over 4 years ago. I don’t really have to mess with many settings but since I have a higher end gaming rig, I definitely try to go for 60 FPS because 95% of the time I’m able to have the good textures as well as 60 frames per second.

If you have a mid level or even an entry level gaming PC then the textures might be more important to you in some games. I’d say a game such as Skyrim or Fallout 4 would be more enjoyable with cooler looking textures rather than 60 FPS on lower spec rigs because 60 FPS would only be able to be achieved on a tweaked low/medium setting and the whole point of having a gaming PC is to be able to have the games look awesome anyway, right?

But in a multiplayer shooter such as Counter Strike, I’d much rather have 60 FPS over having good textures. Some people even take it to the extreme with a 144Hz monitor to get over 60 frames per second and they say that it gives them an edge. For me, 60 FPS is more than enough to play competitively.

Other settings such as how high the textures are set, the shadow quality, view distance and reflections will also affect how smooth your game will run. Those settings are more for personal preference.

In some games, there’s hardly a noticeable difference between “high” and “ultra” settings and in most cases it’ll give you more frames by having it on high instead.

Some people don’t care at all about reflections and so that helps boost FPS in most games. Some don’t care if the shadows look pixelated since they’re more focused on the action.

Whatever your preference is, you’ll want to – at the very least – be gaming at 30 FPS.

Any lower than that and it’ll seem like your game has a slight lag to it.

All in all, most of the graphics settings in game is going to come down to your personal taste.

Would you rather sacrifice awesome textures for smooth gameplay, or the other way around?

As I said earlier, it makes more sense to have better FPS in a multiplayer shooter. But if you’re playing single player GTA V and you want the game to look more beautiful then it makes sense to turn up some of those settings.

Antialiasing and Anisotropic filtering are the two biggest ones in my book. Once you lower those, your frames are basically guaranteed to increase and they aren’t the most noticeable graphics, especially at 1080p resolution.

So, which is more important to you?

2 thoughts on “What Graphics Settings Should You Adjust?”