I’d like to review a game called Blackwake that has released as an early access title recently, it’s a pirate game that’s aiming to be as realistic as possible.

There is still a pretty long road ahead for the title to become the best version that it could be but if the developers keep trekking along as they are today then Blackwake could prove to become one of the best if not the best multiplayer pirate game out there. 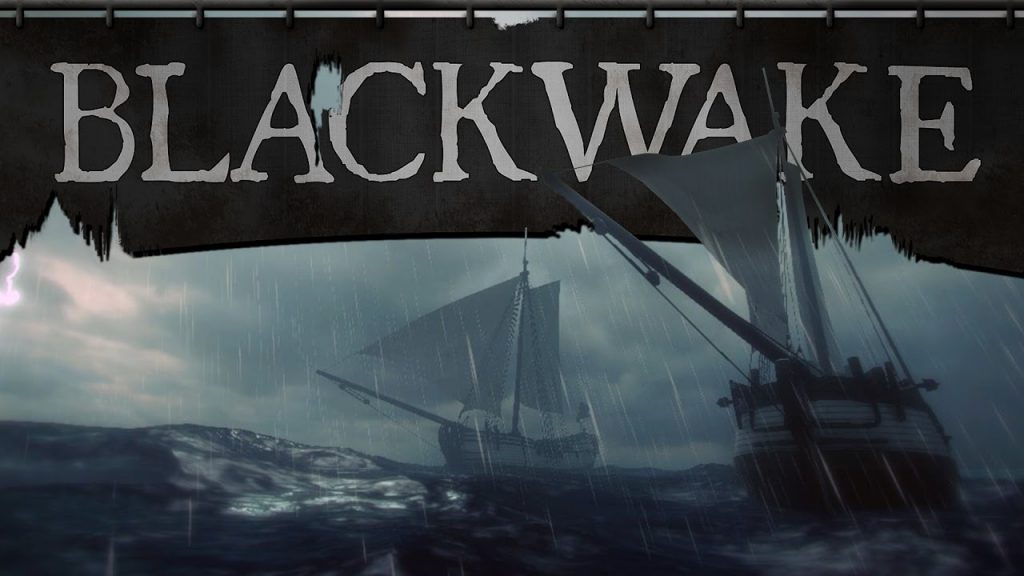 This is one of those games that you’re not going to understand right off the bat. There is a learning curve and a good bit to understand in order to operate at an optimal level.

It’s Pirates VS the Navy. Each faction has their own ships with their own captains and many crew members that each have to pull off specific tasks.

The captain is voted for at the beginning of the match, usually a higher rated captain is preferred since it’s a clear sign that they know what they’re doing.

The captain is who steers the ship and shouts out commands to the crew as to what the plan of attack is. It’s up to them to decide if they want to loads the cannons with regular shots or with grapple hooks to board an enemy ship.

You can hold the C key as a captain and a bunch of different commands come up. Once you issue a command it lets the entire crew know what you’d like them to do.

A captain could let everyone know that they plan on ramming a ship soon or to load a specific side of the ship with ammo. Whatever the captain decides, granted that they know what they’re doing, is what the crew should do.

Communication is 100% the key to victory with Blackwake because although you can issue commands without saying anything with a mic, it makes a lot more sense to be talking to the crew.

I’ve played the game a good bit and after you get your feet wet it’s not necessarily hard to be the captain. I’ve been captain a few times and I have a high rating since I’ve contributed towards victories.

Communication between crew members and the captain is what needs to be had in order to ensure victory.

Many people have microphones and for the most part, every captain shouts out orders as they’re also using the command wheel to let everyone know what a good plan of action will be for whatever is going down.

The goal is to eliminate the other team, each side has a certain number of tickets or spawns that they’re able to have. After an enemy team runs out of tickets then nobody will be able to spawn which gives the team a victory.

What I love most about the game is that you have to actually time the shots of the cannons and you have to reload cannons realistically. You have to put in gunpowder, then the cannonball, then you have to get a ram rod to push it forward into the slot so that it’s ready to fire…

Same with the weapons. You can make a loadout of different weapons but reloading is very realistic, you’re not going to simply change a mag and be ready for the next shot. Every shot you have to put in more gunpowder and what not and it takes a long while, exactly how it would be back in those times.

The Community Is Top Notch

Behind every great game is a great community behind it that treats other players with respect and shares a passion with the same ideals for the game.

That’s exactly what Blackwake has created. In most multiplayer games today you’ll come across extremely salty players and/or players that simply are there to disrespect others and make it so that others aren’t having fun.

You’re going to see a very minute amount of that in Blackwake. Almost everyone simply wants to role play as a pirate and to enjoy the process of shooting cannons, boarding ships and yelling “ARRRGGHH” whenever they deem it necessary!

Not going to lie, I get into character every time I play. If I’m playing the pirates then I create an accent as a pirate. “Aye matey, that be a good call right thar!”

If I’m playing as the Navy then I’m going to create an english accent to go along with it. I’m not the only one, many players love to role play their characters yet take the game seriously and move towards a victory.

This is my favorite part about the game. Most everyone just wants to have a good time and to pretend to be in a naval warfare for a good while and that’s exactly what the game was made for.

There is a bit of character customization so each player can create their own look. As you level up by getting points in the matches for getting kills, shooting and hitting ships and making repairs as they’re needed you’ll unlock different customization options. 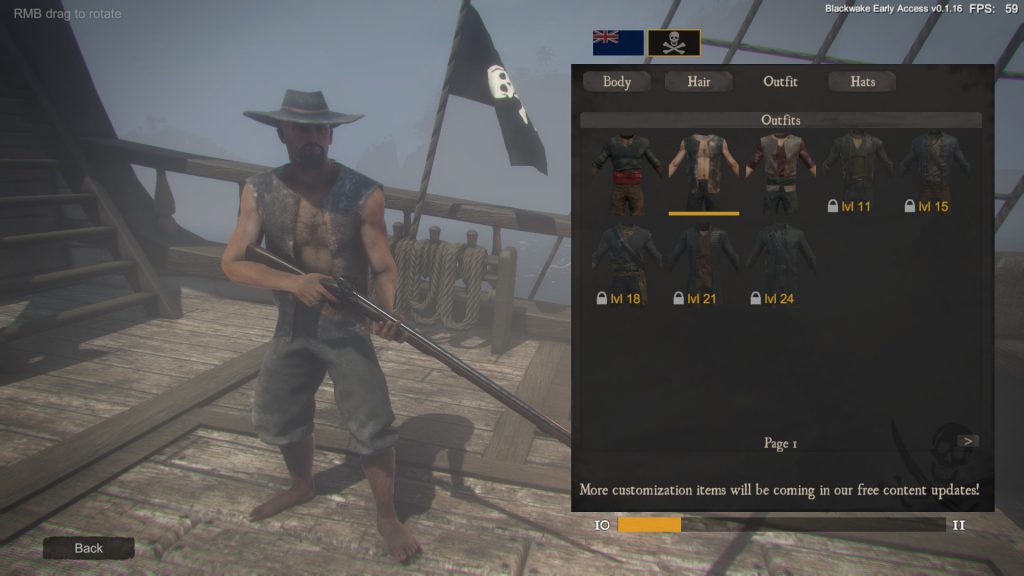 There isn’t a whole lot there yet but that’s understandable since this is an early access title and it only just came out a little while ago. Right now you can choose between male/female, a few different faces, skin tone, outfits, hats and face paint. As I said, you unlock these cosmetics as you level up your character.

Progression is important for every game but I love that the developers are more focused on the game mechanics, optimization and bug fixes rather than skins and cosmetics for now.

With how most games are today, especially early access titles – it’s a blessing that they’re focused in the right direction.

This game has some pretty awesome graphics! To be honest, I didn’t take that many since the overall gameplay requires me to be paying attention and to always be on top of it but here are the ones that I managed to get! 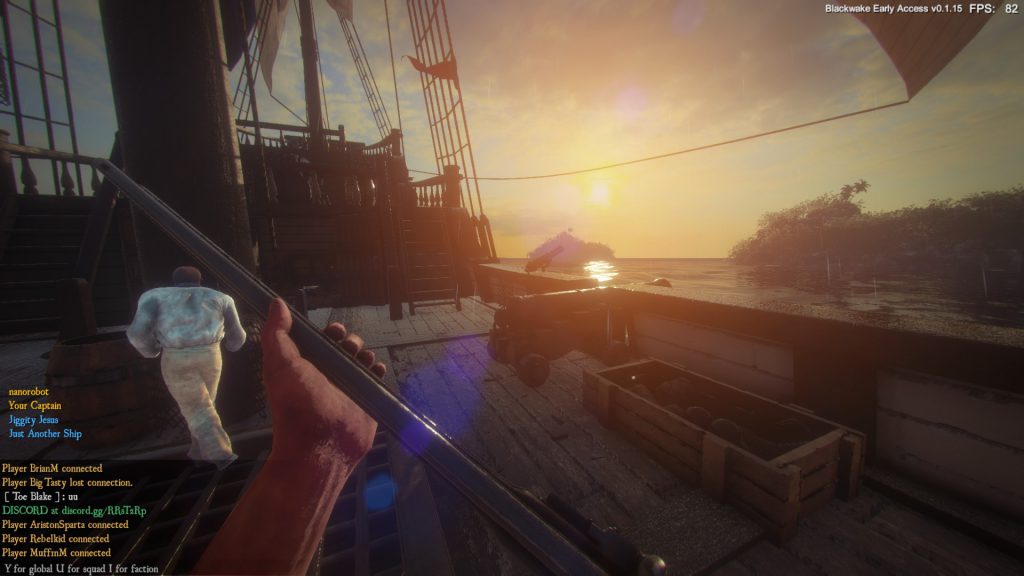 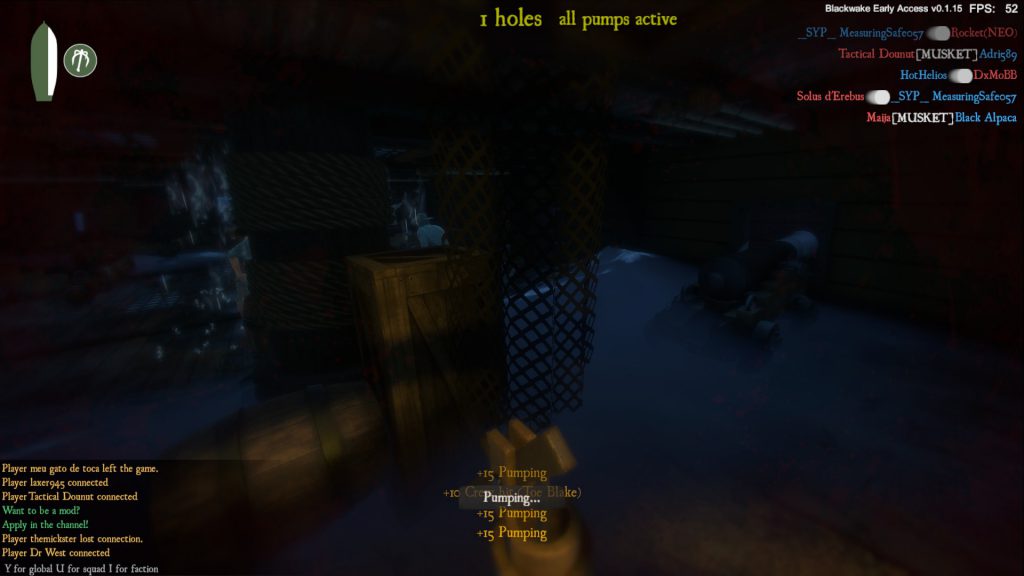 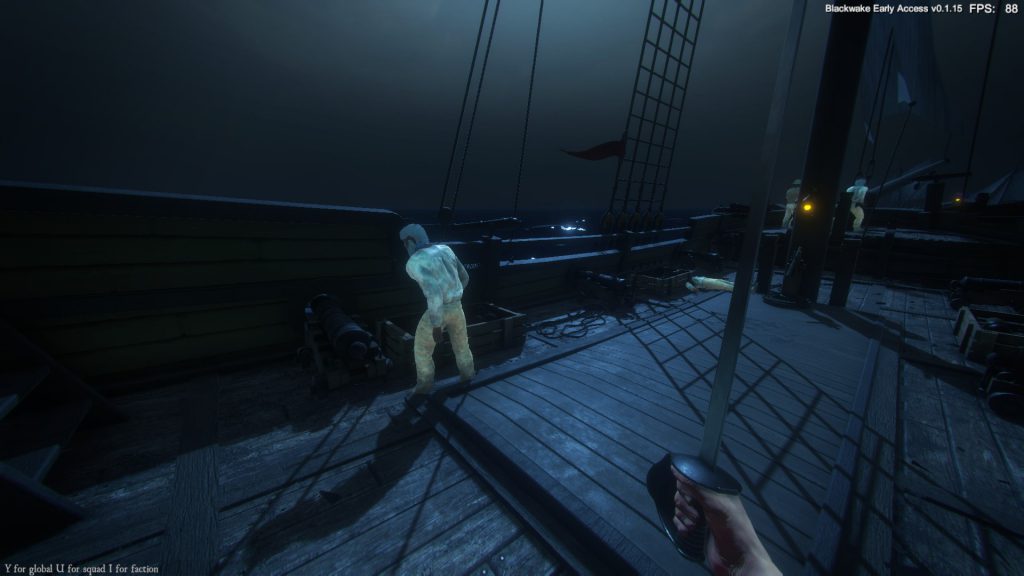 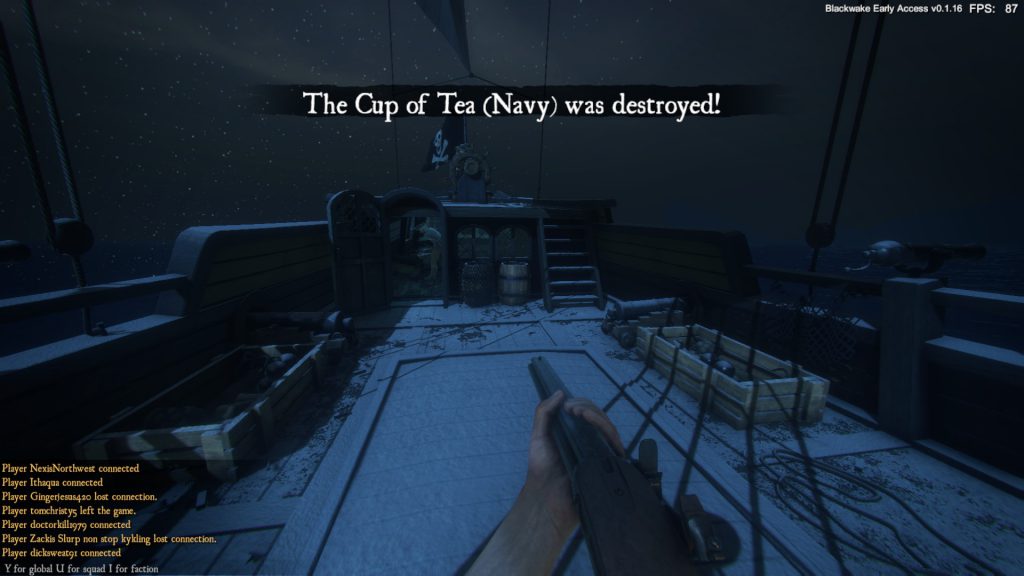 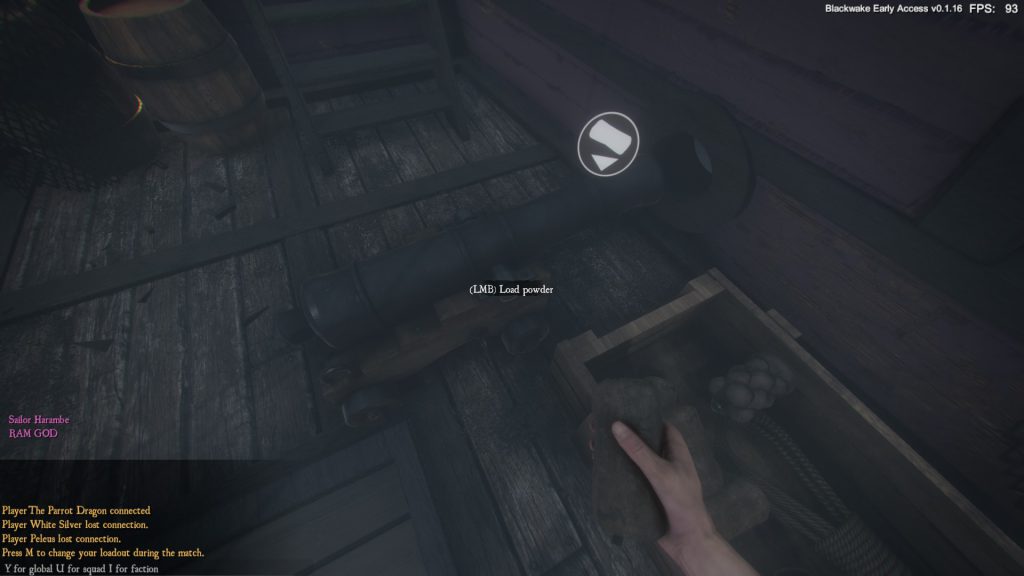 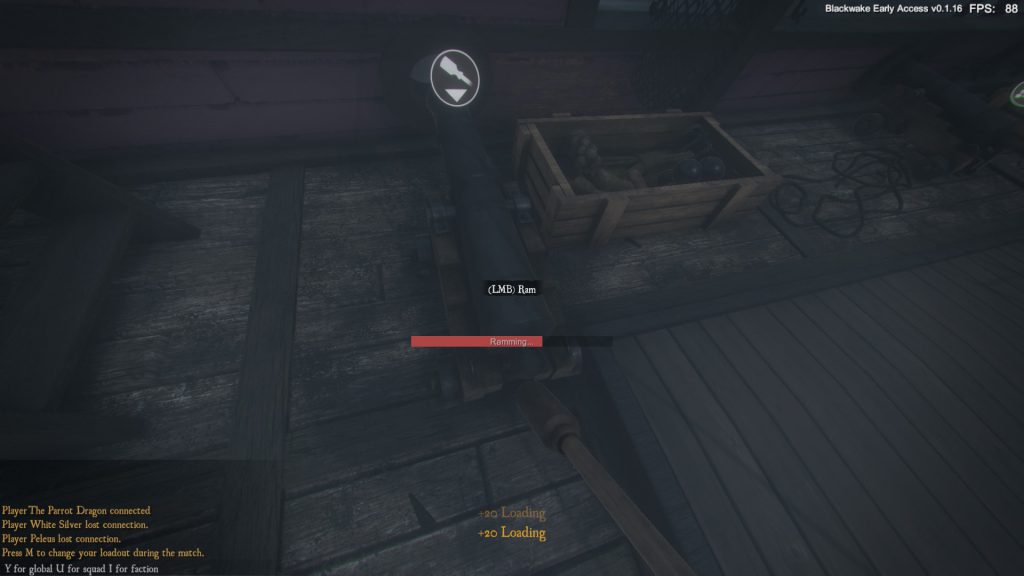 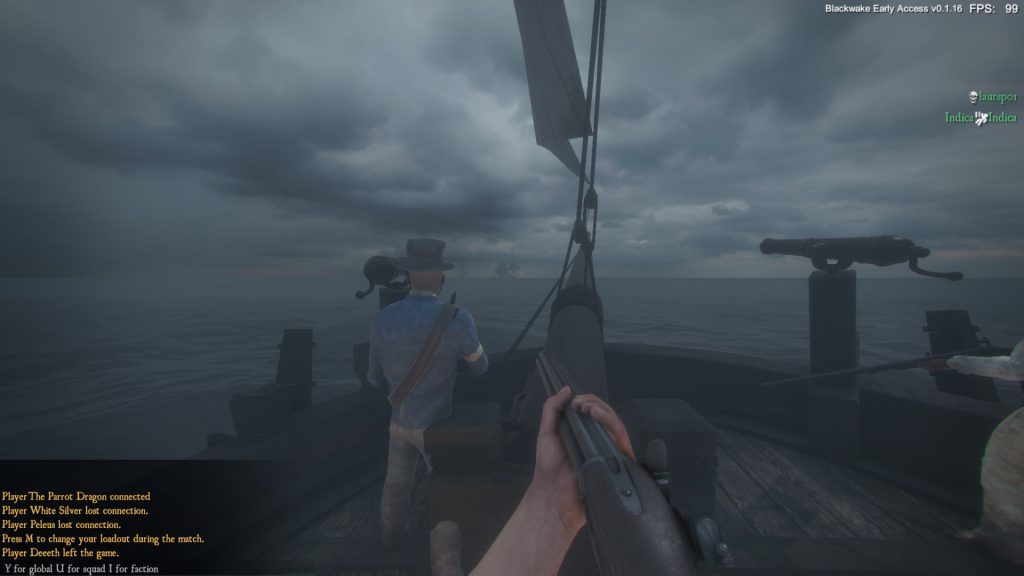 I love the style of the game. I think that these graphics fit very well into the universe that the developers are trying to get down.

As far as animations and what not, they’re pretty good! All could definitely be improved and I imagine that’ll happen in time but with how they are now, they don’t break immersion and it captures the look and feel of this time period well.

I’d Recommend Picking This Up

There is a lot more to Blackwake than what I’ve described in this review. You’ve got to repair holes in the boat, pump water out to avoid sinking, win sword fights, repair sails and ram ships… There are a lot of aspects of the game that are only understandable if you were to give it a shot.

It’s available on Steam now for $19.99 as the base cost and it’s well worth it! I don’t mind supporting a game that has a consistent development team behind it making sure that the game becomes what it should be.

If you’re into community driven multiplayer games, pirates, naval warfare and ships then you should get this! If you’re a fan of all of the above then this will be your game.

So, what do you think of the Blackwake review – is this your type of game?

If not then why not?