Legend of Grimrock 2 is an amazing sequel to the first one, but what is it all about? The first game had an immersive story… the sequel is even better.

The sequel kept the same controls, fighting system and what not as the first game had with a few big changes thrown in. There are more classes, there’s a new race to add to your party and the game world is an actual game world!

The first game was just one big dungeon to get through with a Steam workshop full of other dungeons. This 2nd one is one big map which is an outdoor map along with different dungeons all around. I am thoroughly enjoying this one more than the 1st game… there’s just so much more to do and to see! 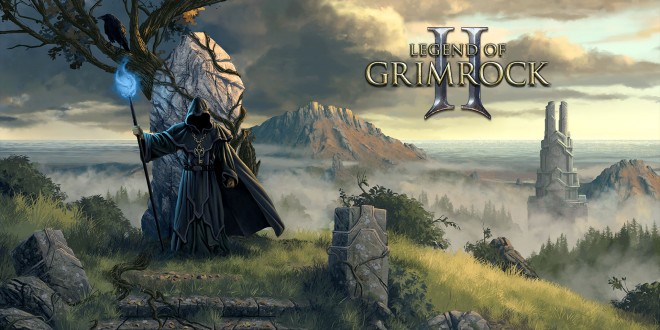 Legend of Grimrock 2 uses the same fighting and character creation system as the first game did.

Fighting is a bit different in that some enemies are able to do certain moves like coming in and out of the ground in different areas, bouncing in the air to flank your party and being able to attack sideways.

These small additions actually drastically change how combat is done. You can no longer simply walk around an enemy hitting them, you have to time everything and move around enemies in a different way than in the first game. In the first one it was pretty easy to win every fight, that’s not the case in this one.

Movement, attacking, equipping stuff and etc is still the same. It’s still a grid-based RPG where you move one square at a time and attacks have cool downs. Though there are now some new classes such as the Barbarian and Battlemage!

The Barbarian class is basically a more powerful version of the Fighter class. Your strength attribute levels up more often than other classes and so do your health points.

If you haven’t played the first game then you need to know the the character creation system of Legend of Grimrock is a point based system. You can put points towards specific attributes such as strength or willpower and so your character’s stats increase depending on which attributes you decide to increase.

You can create a party of up to 4 characters and unlike the 1st game, you can have any combination of player that you want.

What I mean by this is even though you may say that one character is a fighter, you can still put in skill points towards firearms if you really wanted to and you could use firearms. Though that wouldn’t be ideal or optimal by any means, it sure gives you the full freedom that this game deserves to give off.

In a nutshell your party was on a ship heading towards a prison when you get shipwrecked and stranded on a strange island. There are little notes scattered around the island that have a signature which reads “Island Master” on all of them with a weird looking branding on them.

I don’t want to give anything away but you’ll be running into this “Island Master” from time to time though he’ll disappear pretty quick almost every time that you see him (or it). I’m barely through the game myself so I don’t really know exactly how the story unfolds.

Your main goal is to collect glowing orbs to use within different shrines around the world. By using the glowing orbs within the shrines you’ll be given different orbs of essences (fire, water, earth and air) and you have to get all four of them to open the doors to the Island Master’s keep.

The story is more in-depth than that, I just wanted to get you the low-down on what’s going on in this Grimrock world. 🙂

The map is big.

If you thought the first game’s dungeon was big then you’re in for a pretty awesome treat with this one. 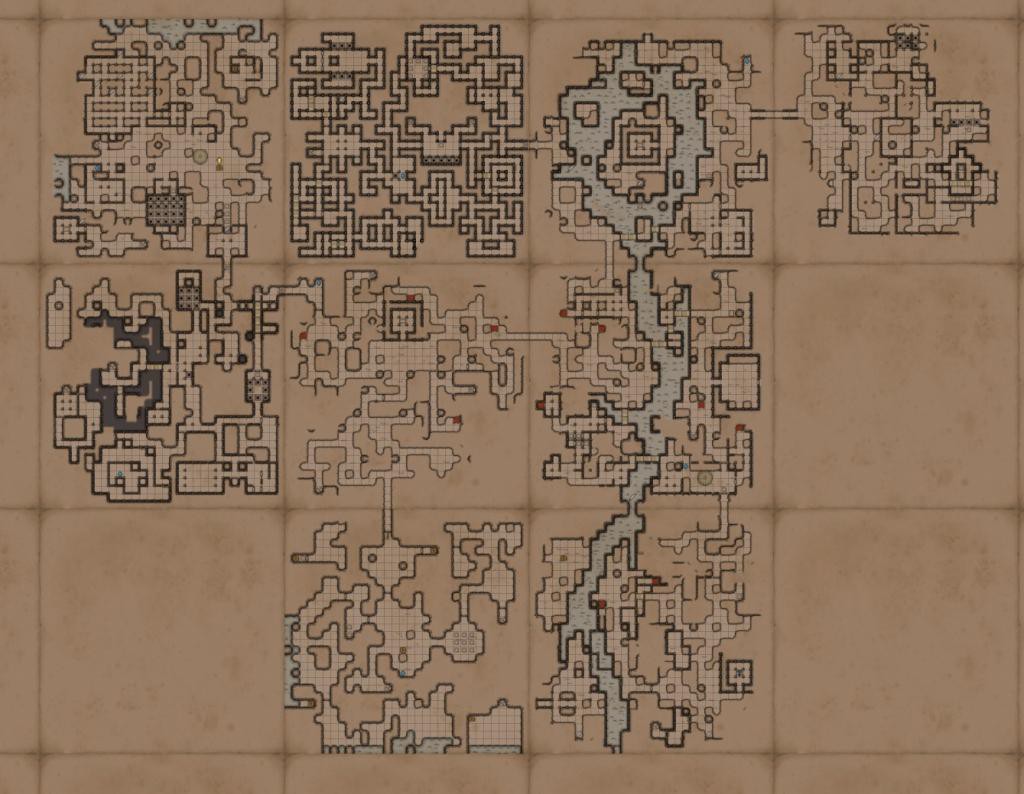 That’s basically the world map. And there’s a lot more to it than that as well.

It’s pretty awesome having an actual game world rather than just one big dungeon. There are plenty of dungeons within each area of this map, each of which are pretty well in depth. The dungeons are much like how the first game’s dungeon worked, there are hidden buttons, hidden traps and hidden walls throughout all of them.

There are also a bunch of secrets on the island itself within each area and there are even treasure chests both out and underground. You’ll gain a shovel pretty early in the game allowing you to dig holes to look for loot. (Hint: dig in front of the tomb stones in the cemetery!)

Some Screen Shots That I Took

These screen shots are all taken in game with my current party.

I’ve got a heavy weapon wielding, human barbarian and a dual-wielding lizardman rogue on the front line with a ratling rogue that does firearms and missile weapons and an insectoid mage that focuses on shock damage and buffs such as invisibility. 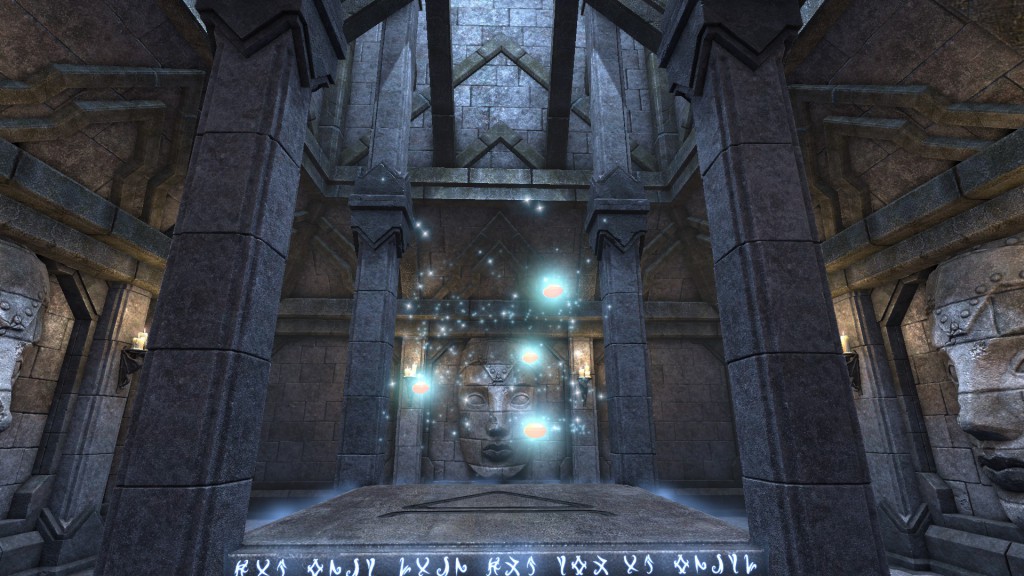 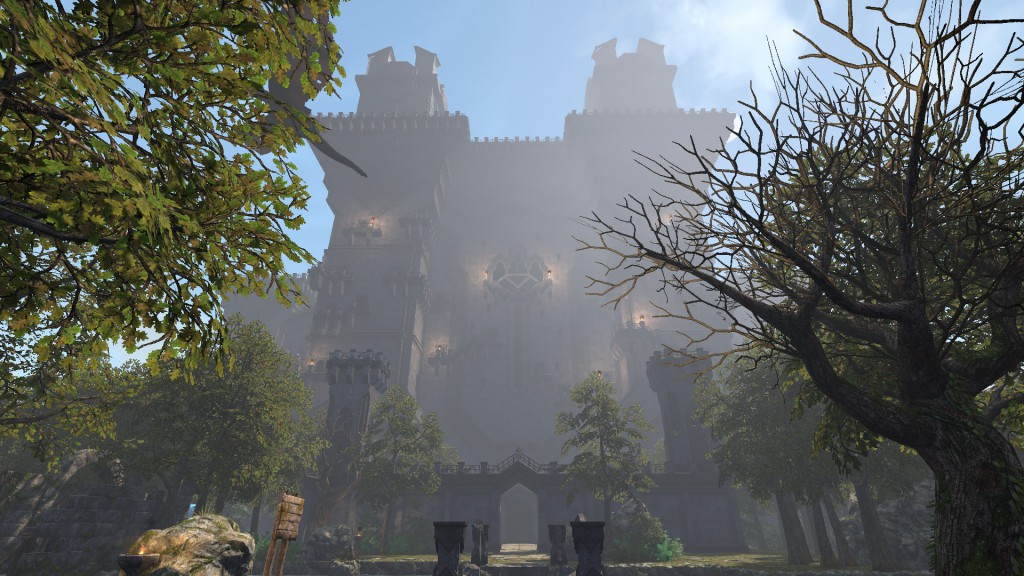 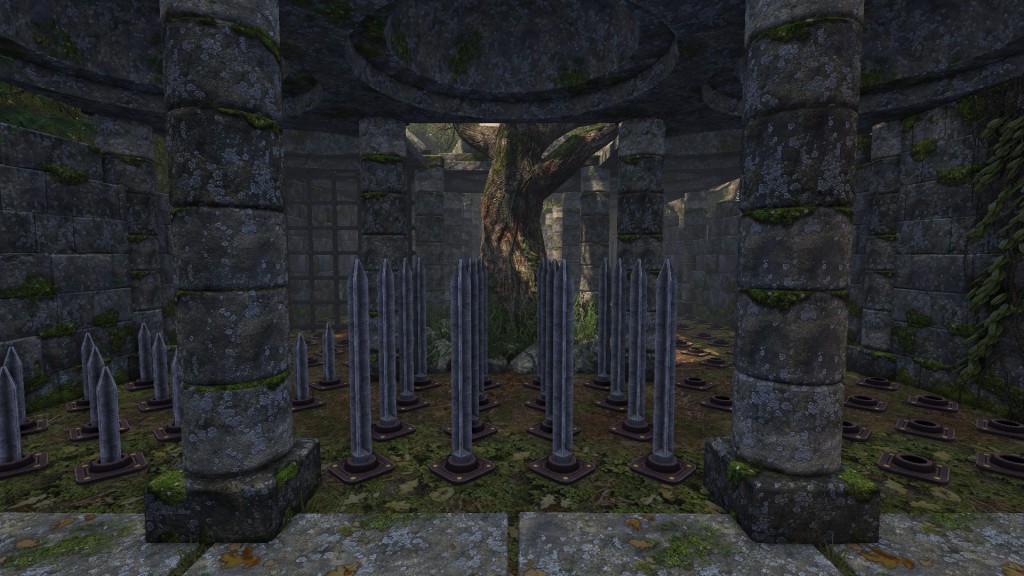 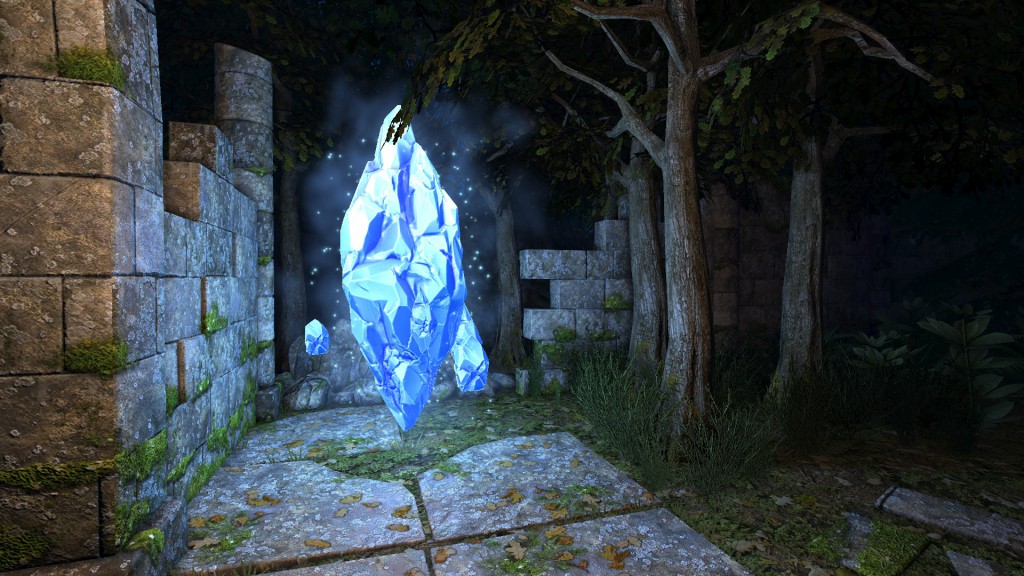 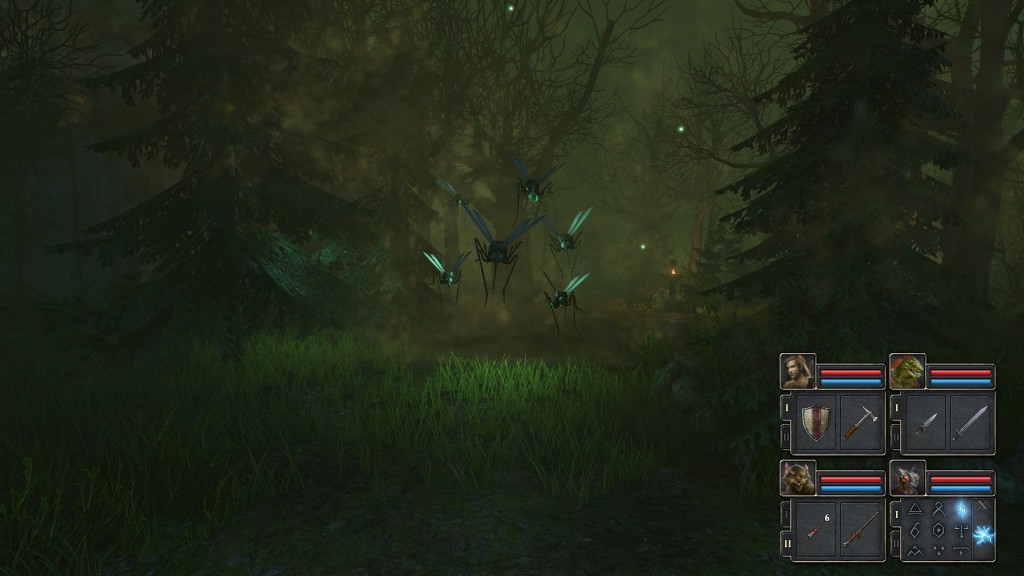 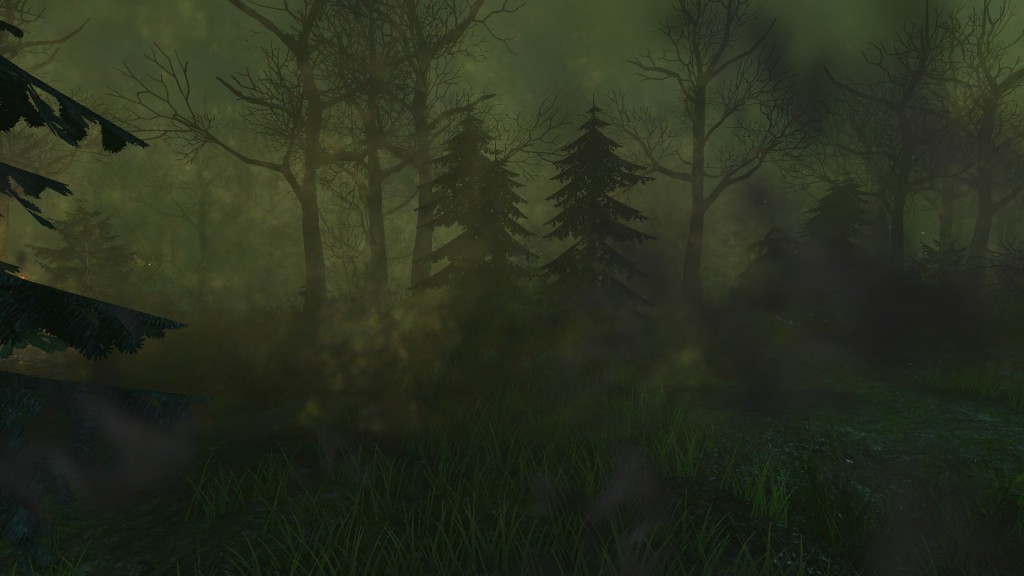 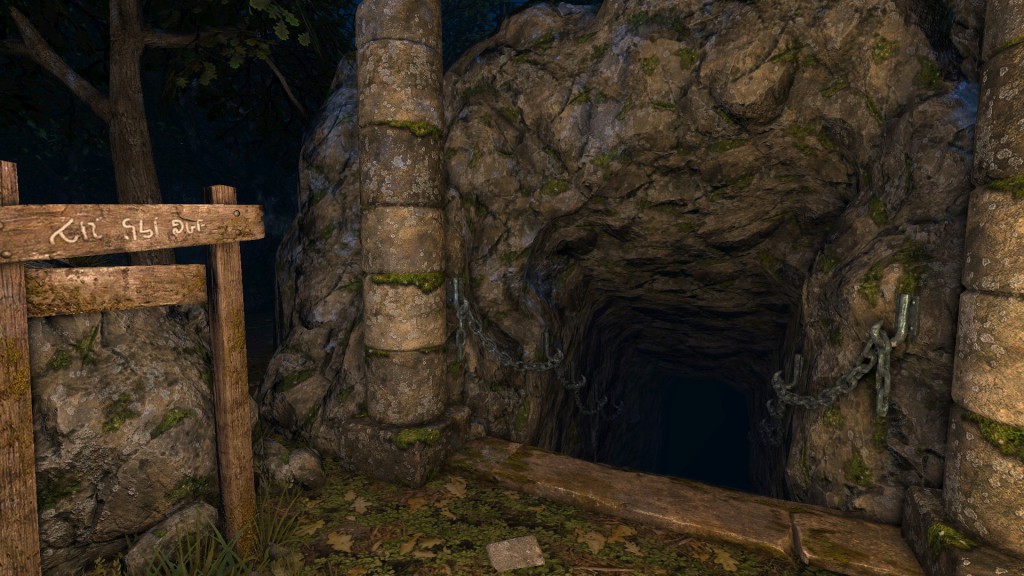 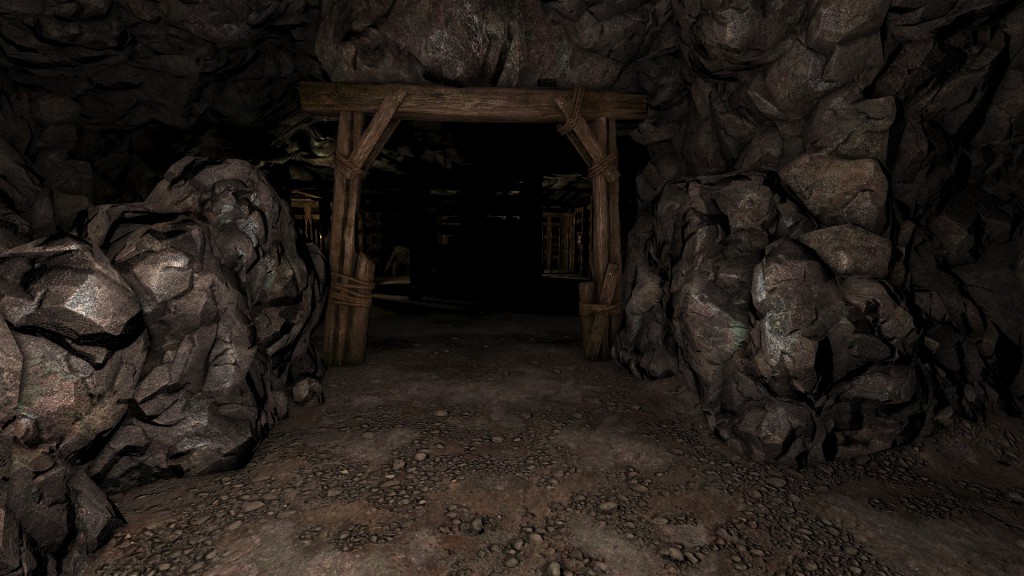 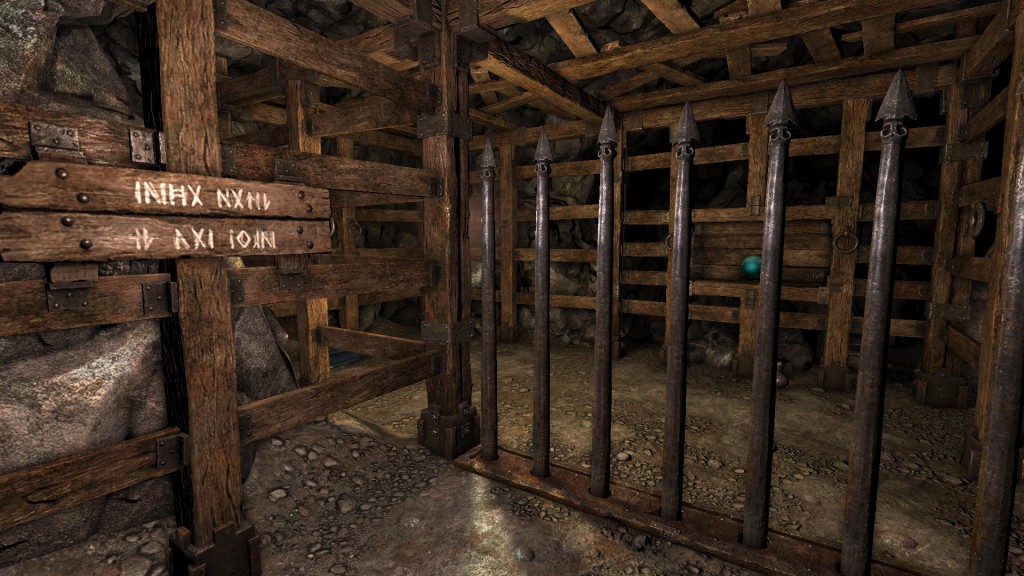 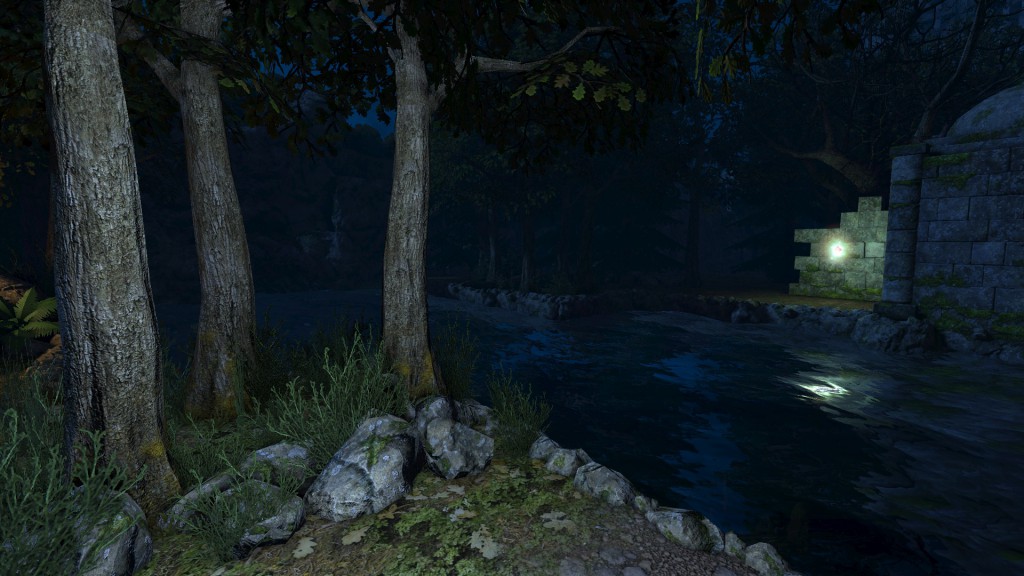 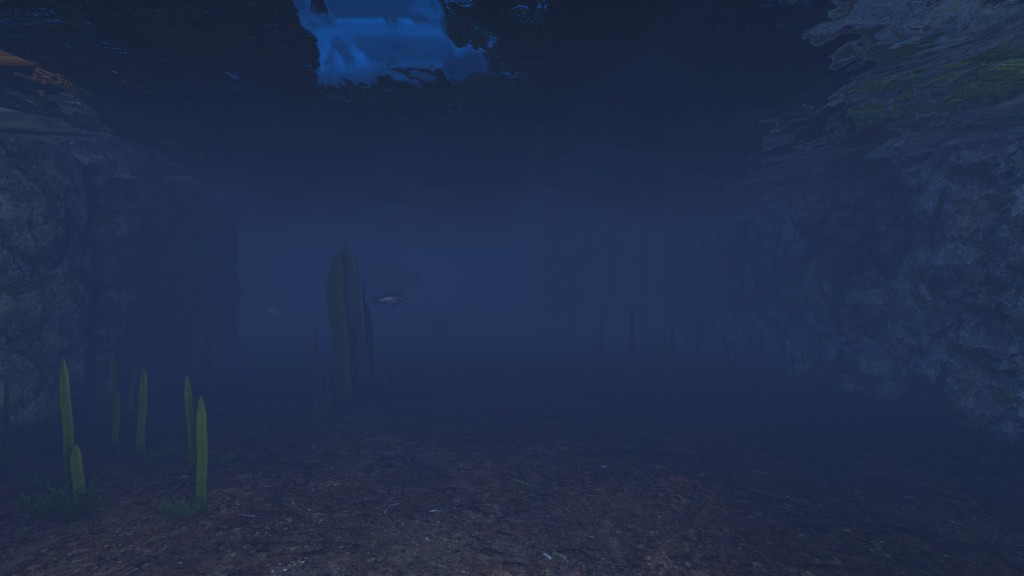 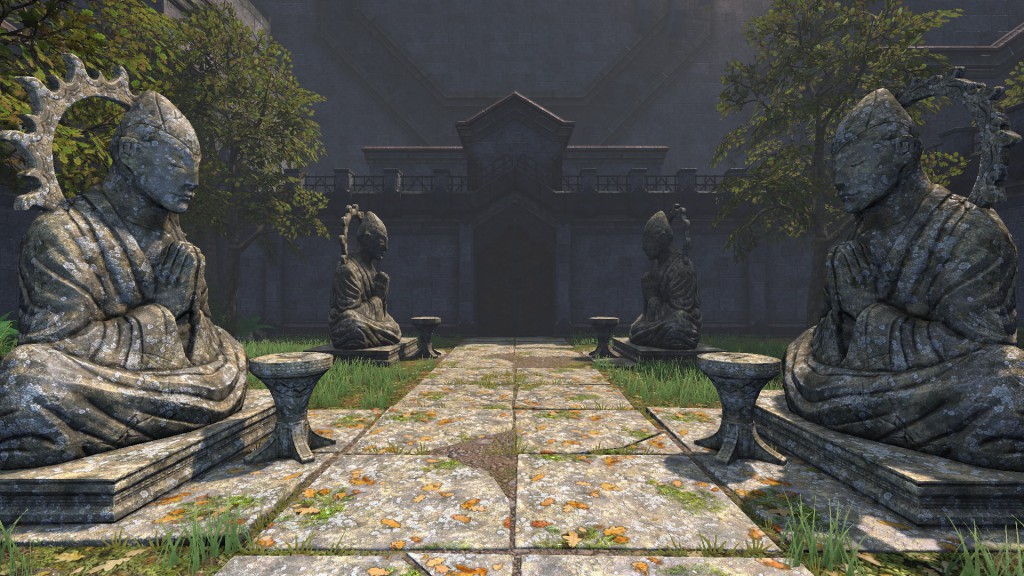 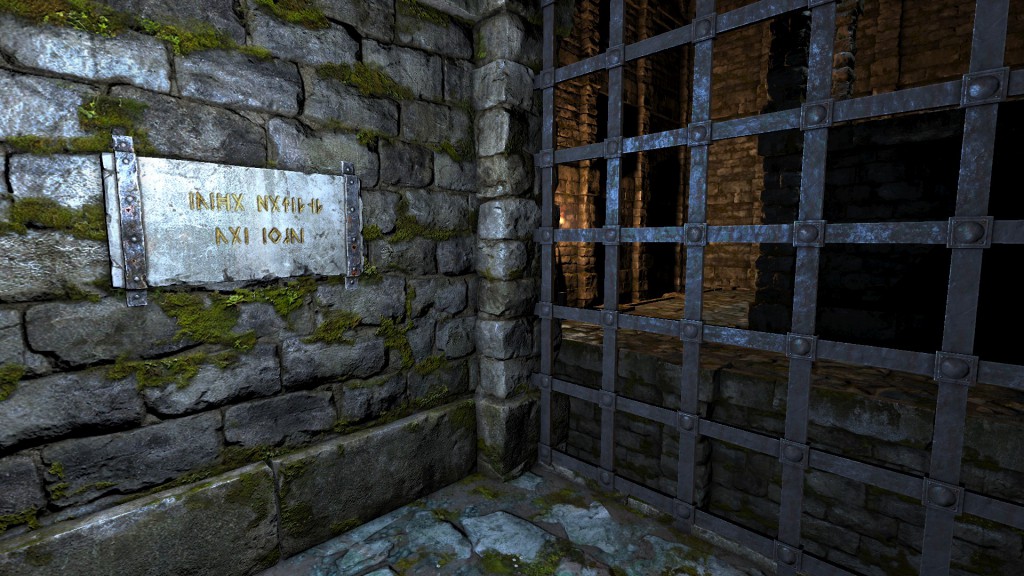 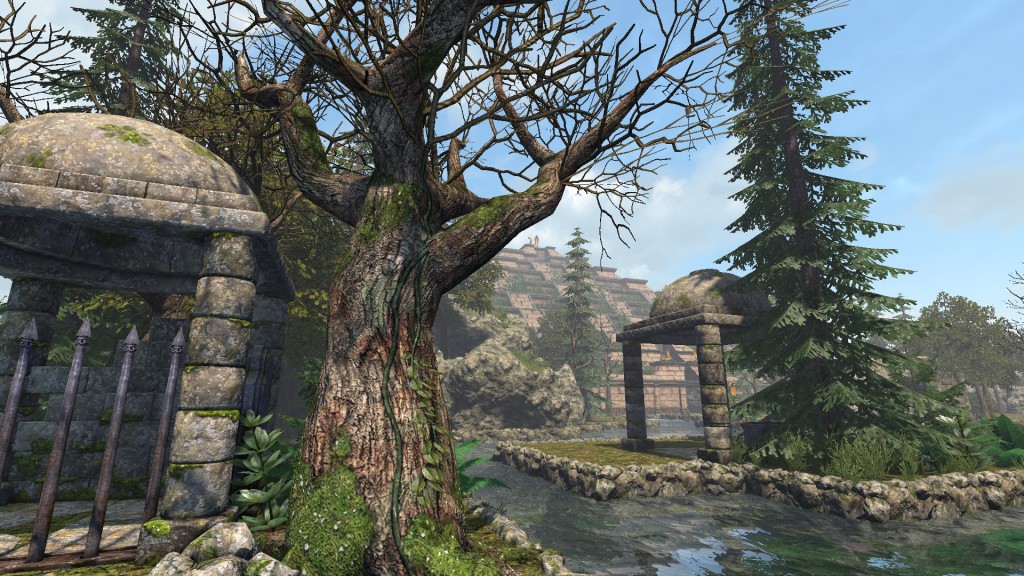 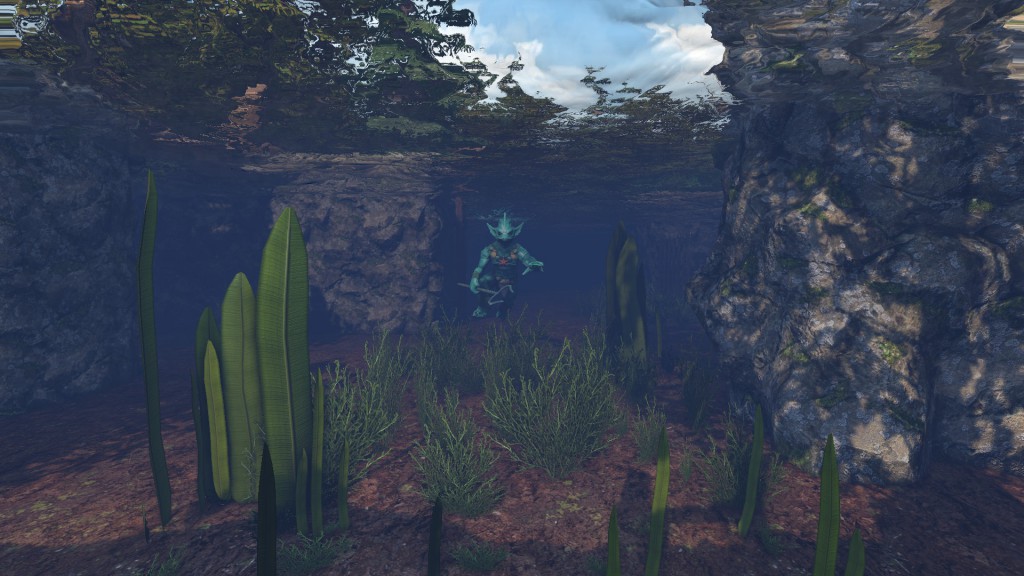 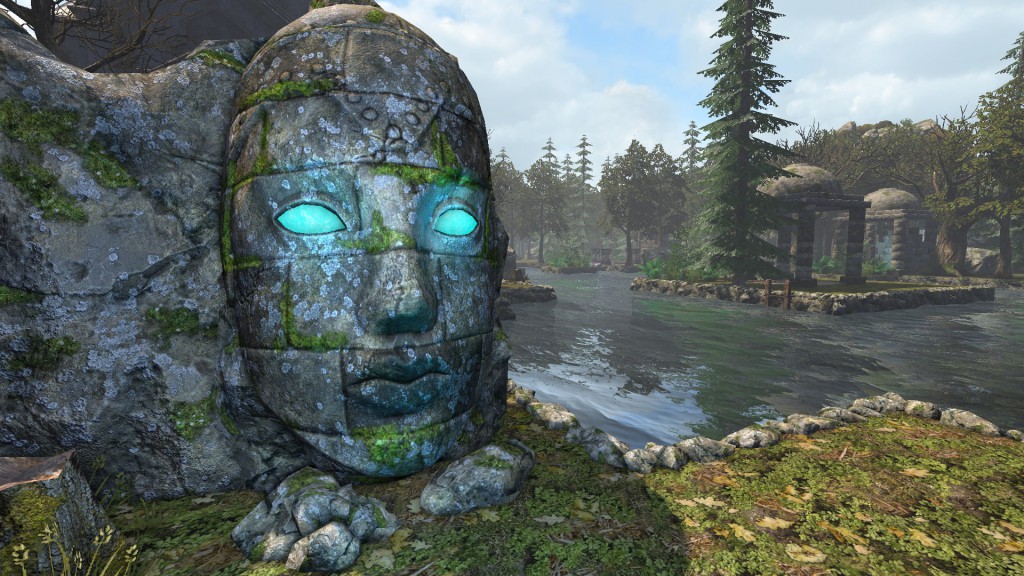 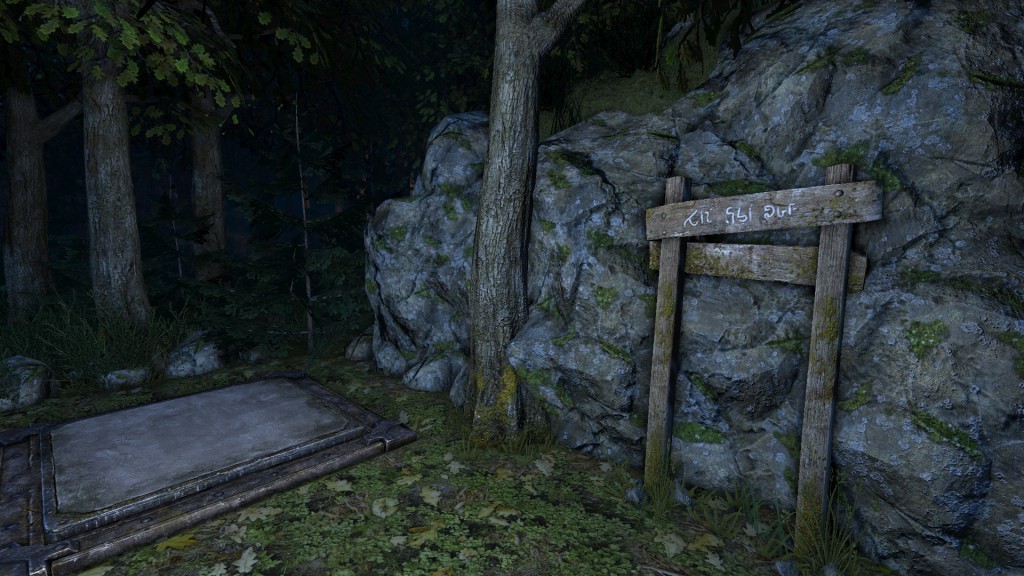 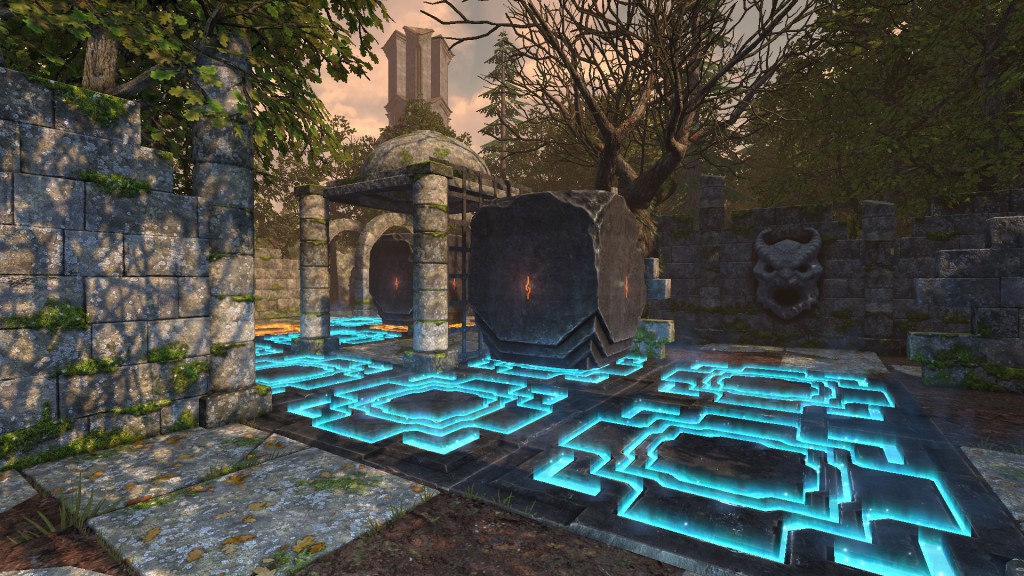 I absolutely love the art style that the Legend of Grimrock series has! 🙂 These screen shots don’t even scratch the surface of what the game has to offer, I really think you should check it out! It is definitely one of the best PC games I have ever played.

All in all, Legend of Grimrock 2 is an amazing sequel to the first game. If you played and/or liked the first one at all then this game is a no-brainer.

Yet at the same time, someone completely new to the series could jump into this one and understand and have just as much fun!

I’m very excited for a 3rd installment. There hasn’t been any news about one yet but I think that Almost Human (the dev team behind Legend of Grimrock) cares about the large fan base that this series has. I’m sure they’re working on a third game!

The controls for this game are actually very simple, you move around with WASD and look left or right with Q & E. It’s basically like an old school, table top RPG game made with modern day graphics and writing.

I’ve actually been playing this game with my Steam Controller and it has been a blast using it. No, it’s not essential for the experience to be heightened or anything like that, I just enjoy using the controller… especially for a game like Legend of Grimrock!

So, what are your thoughts on Legend of Grimrock 2?

Have you played the first one?