Rogue Heroes: Ruins of Tasos is a top down, co-op dungeon crawler that is heavily inspired by some of the classic Zelda series games.

I figured I would jump into the demo and give a quick first impressions post on what I think of the game, the future of it and whether or not it’ll be worth checking out when the full release comes along. 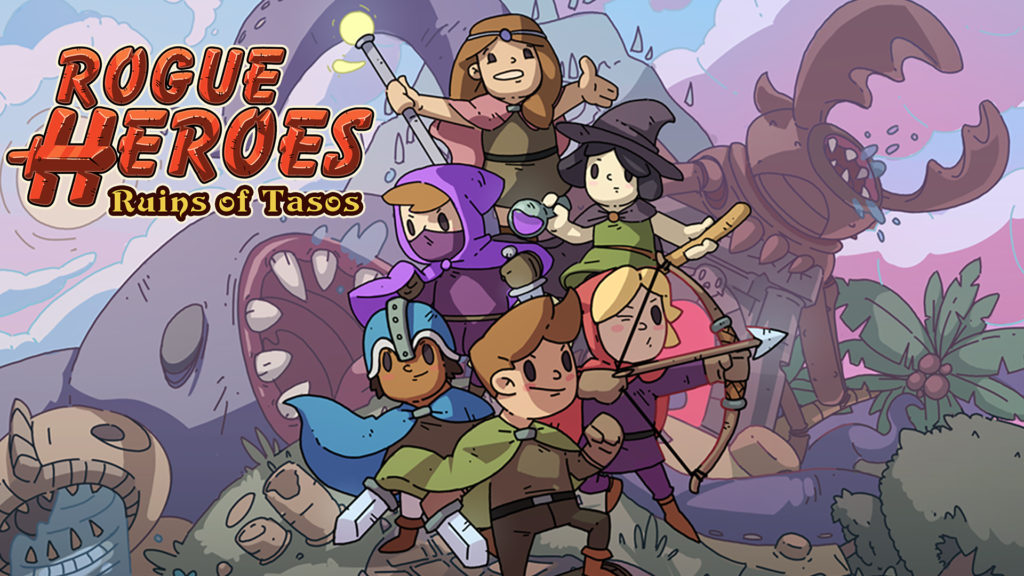 The Demo Is Available Now!

I never saw an official post or anything of that nature but instead sort of “stumbled upon” the demo while searching up the game.

You can download the demo on Steam right now if you want to check it out for yourself! You can play solo or through local co-op.

I first heard of Rogue Heroes through an Instagram ad. These types of games are among some of my favorite genres in gaming so I was instantly hooked into wanting to look deeper into it.

I didn’t realize that there was a village building system, heavy puzzle solving dungeons and combat that is actually somewhat challenging when I first started playing the demo.

It’s free, there is quite a bit of content and you’ll get a run down of what it’s about so I encourage you to download it for yourself and see what’s up! Otherwise, keep reading along and I’ll share my perspective on the different mechanics of the game that I’ve noticed so far.

Overall combat is pretty straight forward in the demo. You hit X (on controller) to attack and you can hold B to charge forward and hit enemies as well as using LT for a shield. I’m not sure what the keyboard controls are, this game definitely felt great using the gamepad though.

In the demo you can only play as one class but it seems that you unlock other classes through one of the village buildings that you can build but I’ll go into more detail about that later.

I ran into some slimes, rats and skeletons – you know, typical RPG enemies but that’s not a bad thing. It felt good having a classic combat system in place.

The first enemies were very easy to defeat and there is a short, interactive tutorial that shows you how combat and movement is done. It’s easy to follow yet fun!

It wasn’t until I got to the second floor of this dungeon that they have at the top of the map… that’s where some challenges ended up coming up.

Enemies have a number next to their health which shows their level but I wasn’t sure if I leveled up myself? Or if the enemy levels simply showed how difficult they would be… I’m not entirely sure how it works.

With that, combat is smooth and the game doesn’t allow you to simply spam attacks in order to kill everything. Stamina gets used up pretty quickly and you’ll be slowed down for attacking and movement if you spam your attacks too often which leaves you vulnerable to enemy attacks.

You can tell the devs have a love for combat like in the old Zelda games but they have added their own taste to it. I’m looking forward to trying out the other classes such as archer and what not, the classes will definitely add variety to the combat.

You can shoot spells, attack with your sword and dodge enemy attacks… the overall combat feels great and it’s fun to fight enemies. As far as combat goes, I’m impressed and I’m looking forward to seeing what else they do with combat.

Within the first (and only) dungeon in the demo, I instantly had vibes of nostalgia. Pushing blocks, killing slimes and figuring out puzzles to have chests appear… it feels good but it’s also not a carbon copy of Zelda games either.

The point of going into dungeons is to gather gems which is the currency of the game. You can use gems to unlock classes, weapons and buildings for village construction.

Within the dungeons themselves, there are several rooms and different floors you have to traverse before getting to the boss. If you die, you keep your gems and respawn back in town in your bed.

I like that you keep the gems upon death… You have to gather enough to buy shortcuts to different floors of the dungeon which is a lot like Enter The Gungeon in that sense.

This creates a rewarding sense of progression and there is plenty of exploration to be had in these types of dungeons. When I opened up the in-game map, I saw that there were A LOT more areas and dungeons to explore in the full game which is exciting to think about!

If I had fun playing around in the first dungeon in the game… then the later, more challenging dungeons are going to be incredible.

To me, the village construction mechanic is one of the main parts of the game. There are a bunch of different buildings that you construct through a NPC named Griff by paying him gems that you gather in the dugeons.

As you progress you will be able to build up training grounds, tailor shops and a lot more with buildings. You can place the buildings wherever you want and really make the village “your” village.

I didn’t dive into each building type for myself as I didn’t have much time to try to beat the first boss which gives more options for construction, but it seemed pretty deep in terms of building types and what you can do within your village.

It seems that roads and what not will be automatically created to provide roads to each building that you put up in the village, the possibilities seem pretty awesome!

I’m looking forward to seeing what’s possible with village construction and if co-op has any affect on it.

Will the village buildings be chosen by one player or by more than one? Guess I’ll find out once I’m able to get a friend or two to play with!

These types of games – top down, co-op, RPG and dungeon crawling – are some of my absolute favorite types of games. Rogue lite elements, customization, village construction and a fun combat system…

This will definitely be a game that I spend quite a bit of time with and hopefully a large portion of that time spent is playing it with some friends as well!

So, what are your favorite parts of Rogue Heroes: Ruins of Tasos? Did you try the demo out?

What other features are you looking forward to in the full game?