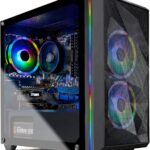 12 thoughts on “Skytech Chronos Mini Gaming PC Review 2022, Is This Mini PC Worth Getting?”